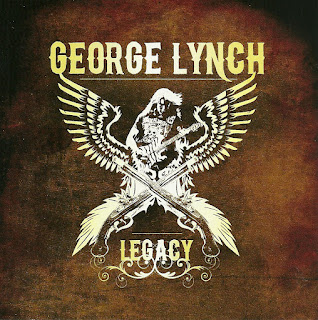 That George Lynch...what a tease!  Mr. Scary has returned, but not in the way you might think.  With Legacy, Lynch has dropped four all-instrumental songs on us, keeping our appetite whetted until a new Lynch Mob release, or until he puts out an album with T&N, the new project he has been working on with Mick Brown and Jeff Pilson (all formerly of Dokken).

The only 100% new song here is the first track, "Blood Drive".  This driving rock number will be instantly recognizable as a George Lynch track, as his signature playing style is evident almost immediately, but he also mixes in a bit of the "Satch boogie" style of Joe Satriani.  I love this track and think it is by far the strongest of the four here.

The remaining three tracks are all re-titled, re-worked versions of older songs, although most people likely have never heard them.  A few years back, George offered a sort-of-demo EP release on his website which was called Hang 'Em High, but EXTREMELY limited numbers of these albums ever saw the light of day.  So, George took those three tracks, renamed them and touched them up a bit, offering them up here.  "Circulo Del Fuego" has a lot in common with the album opener, again being a full-on rocker with some absolutely killer axework backed by a solid rhythm section that never encroaches on the work that George is offering up.  This song reminds me a lot of the old "shred" albums of the 80's and 90's.

"Invoid" has the most Dokken-esque feel to it of the songs here.  Think of the instrumental work George did with "Mr. Scary", but then speed things up just a hair and, once again, incorporate a bit of that old shred-mentality to the track, and you have a good idea of what this song brings to the table.

Album closer, "The Road Ahead" is much more subdued, approaching ballad territory, but not quite getting there.  This has a more bluesy feel than the rest of the disc, and the "shred" is left out in favor of more melodic, soulful playing, which George pulls off nicely.  This is where an instrumental album really showcases an individual's talents on guitar, because we really have never got to hear this side of George in Dokken or Lynch Mob, so this is a really cool piece to hear.

Some people are going to moan and groan about the album's lenght (just a hair under 18 minutes), and others are going to grumble about three "rehashes" here...but screw 'em!  I'll take 18 minutes of quality material over a full length album with two decent songs, and as for the re-recorded material, 99.5% of the population never got to hear these songs anyway, so the complainers can either shut up and enjoy this little EP or they can skip it and wait for the new Lynch Mob release...which is also rumored to be an EP, by the way.  In the end, this is a great little tide-me-over until George's next effort and I anticipate spinning Legacy numerous times over the course of the summer.

Rating:  Short, sweet, and to the point, this teaser should be cranked to 8.5 for maximum effect!

Posted by arttieTHE1manparty at 1:57 PM