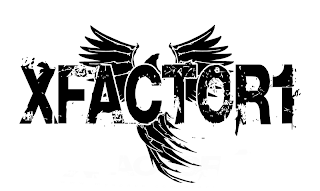 Calling Columbus, Ohio home, XFactor1 is an interesting, hard rocking band that may prove to be a bit hard to nail down.  On the one hand, they definitely have a modern vibe that is undeniable, which really shows up on "Bring It On", yet they also carry a certain old-school swagger in their delivery, which is especially evident on their chosen cover of Billy Squire's classic, "The Stroke".  Sure, the production qualities on both tracks are of the more modern approach, but the guitar work, the big gang vocals, and the attitude of these two tracks are throwbacks to a time when it was okay to be serious musicians AND have fun at the same time!  Wolf's vocals are definitely not what I would call cookie-cutter or typical of the modern scene, spending more time in a lower register than most and never ripping into any kind of piercing wail or anything like that.  Crum's double bass approach at the end of "Bring It On" is solid and gives this hard rocker a metallic edge that a lot of G2G readers are going to latch onto right away.  This combination of both the present and the past gives me hope that XFactor1's new album, Famous.Last.Words, which is due out later this year on Megaforce, is going to be one that is will live up to its advance hype.  The band was listed by Red Bull as being one of the Top 5 bands to watch for 2011, and they are definitely a band that Glitter2Gutter is keeping its eyes...and ears...on for 2012.  Check back for a full album review later!

Rating:  I don't usually attach ratings to previews, but this is a band that is worth checking back for if these songs are any evidence.