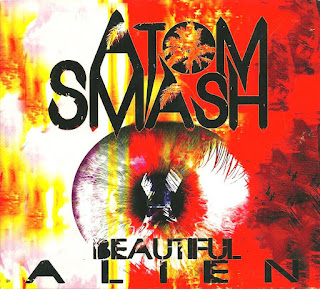 Atom Smash have returned with a new set of what I can only describe as eclectic modern hard rock.  Do not read into that description that Atom Smash would have found themselves at home on alternative rock stations in the post-grunge 90's, because that is not what I am implying.  However, it is difficult to describe the overall sound of this band because they do not stick to one single formula throughout this new album, nor does it compare 100% with their 2010 breakout album, Love Is In The Missile, which featured their biggest hit to date, "Do Her Wrong".  Beautiful Alien finds the band in a far more experimental, yet still hard rocking, mode throughout much of this record, and with the seemingly odd choice of a cover of Seal's "Kiss From A Rose", these Florida-based rockers show that there may be more to the band than many people may have guessed if all they have been exposed to is the previously mentioned "Do Her Wrong".

Beautiful Alien features only two returning members from the previous album, but drummer "Taco" and frontman, Serg, do a great job of maintaining the band's style and sound throughout the album, and the new additions of "Cowboy" Luke Rice on guitars and "Crazy" David Carrey on bass round out a very solid musical base.  It's difficult to not enjoy the diversity of "Cowboy", especially, as the man brings not only his guitar and bass with him, but he also sings...and packs a mean flute as well (yes, he plays flute on the album...but don't worry, this isn't Jethro Tull!)

The album's lead single, "The World Is Ours" has been receiving solid airplay on hard rock radio and Sirius/XM satelite radio's Octane station, and is a logical follow-up, stylewise, to "Do Her Wrong".  "The World Is Ours" is a bit more melodic in nature than "Do Her...", but still features strong guitar-driven rock and Serg's emotive vocals on this positive, uplifting rocker.  Album opener and title track "Beautiful Alien" is a powerful, guitar-centered rocker that has just a hint of country-rock to its sound, especially in the use of a slide guitar and an almost twangy downbeat style that seems, well, rather alien on an album such as this, but works incredibly well.  "Hangman" has a somewhat U2-ish feel to it, especially in the way Serg approaches the vocals, and "Cocaine Angel" is a starkly beautiful, finger-picked acoustic guitar and drum number that really feels like a comfortable, lived-in song that I am guessing Serg and "Taco" have been toying with for some time now.  "Hole In My Head" is a great, hard rocking track with a bit of an off-kilter rhythm and some excellent guitar work that I think will find its way onto rock radio very soon.  Toss in the cover of Seal's "Kiss From A Rose", which is given a bit of a hard rock facelift but remains pretty faithful to the original, and you can see why I used the term eclectic in my opening paragraph of description.  there is no single style or sound that you can point to and determine, "hey, this is what Atom Smash is all about", because no two songs sound all that much like each other.  Perhaps this is what makes Beautiful Alien such an interesting listen; it is unpredictable and yet still feels comfortable and accessible, which wouldn't seem likely with the shift in band members that Atom Smash has encounterd.  But you know what?  It works.

A couple of tracks don't really do much for me, and both are found at the end of the disc.  "Kids Got Moves" should be, at least in my head, a FAR more uptempo rocker than it turns out to be, and "2012 Baby" just doesn't go anywhere..at least nowhere that I want to go.  Again, not deal-blowers as far as destroying the rest of the album, but definitely not the strength of the album by any means.

Now, I do have a couple of complaints (albeit rather small ones).  First...as I have stated a thousand and one times...I HATE DIGIPACKS, and this album comes in the most annoying kind...the slip-case digi that affords the disc all to many opportunities to be scratched or to fall out.  ARGH!  Secondly, there is a hidden, unnamed track at the end of "Kids Got Moves" that I really don't see any reason for inclusion here.  I don't know why bands put perfectly good...or totally useless...songs at the end of the last track, ESPECIALLY if they are going to hide it behind 6 or 7 minutes of static or silence.  This is just annoying, and all the more so when the track doesn't add anything to the album, as is the case here.  Finally, I really wish the lyrics were included here, as I think Serg definitely has some things to say on this album.  Granted, his vocals are clean and easy enough to understand 95% of the time, but there is just something about being able to sing along if the karaoke mood should strike.

Atom Smash have managed to mature as songwriters while also retaining much of their hard-rocking identity from their debut album.  Beautiful Alien really is not like any other albums I have reviewed in the last six (or more) months, and while it will not melt your face off with blistering metallic intensity, it does rock hard in several places while still managing to be melodic and, as I labeled it earlier, eclectic, bordering on alternative in a couple of spots.  Not the best album of the year, but also nowhere near the worst, Atom Smash's Beautiful Alien strikes me as a good album to both rock out to and unwind with, all depending upon the track number that pops up on your stereo's display screen.  I don't know why they are no longer with Jive Records, but if it was the label's decision to let Atom Smash go...it was a bad decision.  This is a very talented band that I think is going to continue to grow and develop into one of the more unique bands in the hard rock scene.

While their musical approach is not likely to be every G2G fan's cup of tea, I think that many people will enjoy the off-the-beaten-path approach taken by this Florida unit.  I am one of the many who does not normally steer in this direction musically, but I found myself enjoying Beautiful Alien more and more with each listen, especially when I am in that frame of mind to hear something a little different than everyone else on the radio...

Rating:  Rock this at an entertaining...and musically skilled....6.5.

Back To Reviews Index
Posted by arttieTHE1manparty at 4:31 PM