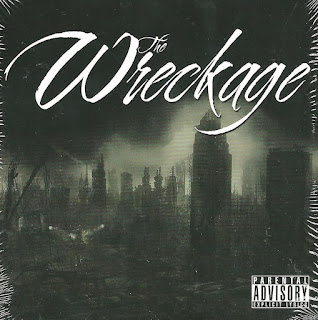 Hailing from Omaha, NE, The Wreckage is a modern hard rock band with an undeniable similarity in sound to the previously mentioned Christian band, Skillet.  In fact, I had a couple of people flat out ask me what Skillet record the track "Breaking Through" was from; the similarities are that stark.  Granted, there are no female vocals with The Wreckage, and there aren't the synthesized strings that Skillet sometimes uses, but it us uncanny how much the two bands sound alike, especially on the opening track, "Breaking Through".  I think a lot of it has to do with lead vocalist Grant Kendrick who could step in at any time for Skillet's John Cooper should the need arise.

There is also an obvious connection and kinship with fellow Omaha-based hard rockers, Emphatic, as all three songs here were at least co-written by Emphatic's guitar player (and main songwriter) Justin McCain, who also had a hand in the recording, mixing, and mastering, as did Emphatic's keyboard player/sampler, Jeff Fenn.  It should also be noted that Emphatic's former drummer, Matt Denker, occupies the seat behind the kit for The Wreckage, so this is obviously something of a family affair.  Heck, Kendrick has even stepped up and helped out Emphatic on vocals on occasion.  How much closer can two bands get?

All three tracks here are straight-forward modern hard rock numbers featuring solid guitar work with a metallic edge, a tight rhythm section (especially on the drums), a bit of sampling, and the previously mentioned gritty-yet-clean vocal style.  For my money, "Breaking Through" is the strongest song here, although all are very solid, with "Don't Fall In Love" being released as a single.  Everything here would easily slip into the playlist on Sirius/XM's Octane station without anyone ever being the wiser about this being an independent release, as the production is top-notch and the sound quality is excellent.  My only complaint is I would like to hear some slower material on the next release, simply to hear the band tackling something a bit off their obvious beaten path, musically.  By the way, while they do have an additional song available on their Facebook, it is NOTHING like the material on this EP, as it is pretty much straight-up death metal and not likely to appeal to fans of this release.  Just be forewarned...

Omaha has become something of a hot bed in the Midwestern music scene, and I would not be at all shocked if The Wreckage becomes the next band to break big out of the Cornhusker state.  Having had the chance to see their live performance a few weeks ago, I can tell you that these guys bring it live with a high-energy stage show, so if you get the chance to check them out, you might want to do so now...before their ticket prices take a serious jump! Oh, and snag a couple of copies of this EP while you are there so you have one and have an extra to share!  Record labels looking for a new band with the right look and sound to fit modern rock radio need look no further than The Wreckage, who are primed and ready to step up to the next level.

Rating:  Granted, it is just an EP, but it's an independent effort and it is impressive.  Crank this to 7.5 and hang on for the full-length, as I think it will smoke!

Back To Reviews Index﻿

UPDATED 3/4/13:  Since the writing of this original review, things have heated up for these Omaha natives. I'd like to think I had something to do with this (although I did not), as The Wreckage has launched themselves into Sirius/XM's countdown on the Octane station.  At last check, The Wreckage's song "Breaking Through" was at number 4 and still climbing, so who knows what good is on the horizon for these great guys.  Best of luck from G2G!
Posted by arttieTHE1manparty at 2:01 PM