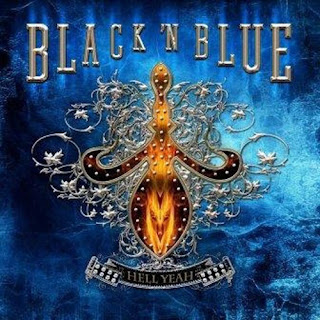 (c)2011 Frontiers Records
Jamie "The Saint" St. James--Vocals
Shawn Sonnenschein--Guitars, Backing Vocals
Jeff "Woop" Warner--Guitars, Backing Vocals
Patrick Young--Bass, Backing Vocals
Pete Holmes--Drums
I've been holding off on reviewing this CD for a little over a week, giving it a chance to grow on me.  Now, before you take that for a bad thing, let me explain.  I have LOVED Black 'N Blue for many, many years now.  The combination of Jamie St. James, one of the most underrated vocalists in the genre, and the equally underrated guitar skills of Tommy Thayer just made magic when they were firing on all cylinders.  Sure, "The Saint's" lyrics could definitely be rather immature at times, but that was part of the fun and charm of this band.  Once I heard that Jamie had ended his Warrant experiment, I was hopeful that we might get the chance to hear some new BnB material.  Once I heard that we were definitely going to get a new BnB album, I was very excited...until I heard Tommy was not on board.  I am not sure if his contract with KISS would not allow him to record outside the band, if he simply didn't have time (as KISS is reportedly in the studio at this time), or if he simply didn't want to rehash the past.  Regardless, the loss of Thayer seemed to me to be a huge obstacle to Black 'N Blue pulling off yet another charmed 80's band comeback, even if the rest of the original band was once again on board.
Hell Yeah! is the first new material from Black 'N Blue since In Heat was released in 1988, but from the very first segment of "Monkey", it is apparent the band has not missed a beat.  This is pure Black 'N Blue from note one, and it continues right on through the first four tracks.  New guitar slinger Sonnenschein has the sound down pat, and while he may not be quite as inventive solo-wise as Thayer could be, he is definitely more than competent, especially alongside seasoned veteral Woop.  Everything is here from the tight rhythm section to the screaming guitars, and Jamie's vocals are everything that longtime Black 'N Blue fans remember.  And the lyrics?  How can you not smile when you hear Jamie belting out such classic deep-thinkers as "As you can see, I ain't no Mr. Rogers...but I still like Eskimo Pie!  My snake tongue, it needs a feeding...as I look into your deep brown eye" from the second track, "Target"?  Ridiculously immature?  Sure, but it's also pure Black 'N Blue sexual-innuendo-laden nonsense the way fans remember.  This disc is off to a monster of a start to these ears!


Two of the really cool moments on the disc are when Black 'N Blue slows things down into ballad territory.  "Fools Bleed" has an almost Def Leppard feel to it with a very simple repetitive verse section similar to "Billy's Got A Gun" followed up by a big layered chorus.  "Trippin'" is an interesting little 46 second intro track that leads into "Fallin' Down" (get it?  "Trippin'" and "Fallin' Down"....?), which is also pulled off brilliantly!  Both ballads fit nicely and are in the top five or six songs on the album and is on par with any ballad this band has ever done, including "Miss Mystery" or "Stranger".

Other standout tracks would be "Candy", "I Smell A Rat", and "Hell Yeah!".  There are a couple of tracks that come off as more filler than real substance, at least to my ears.  "So Long" just doesn't have the same vibe as the rest of the album, and "Come On" is just a bit too simplistic and almost feels punkish compared to the rest of the big-haired arena rockers on this disc.  Neither is terrible, nor even necessarily skip-worthy, but again, they just don't fit the flow of the disc all that well for me.  Additionally, things bog down in a couple of spots due mostly to the inclusion of a couple of joke tracks and a bizarre song that is simply not Black 'N Blue material.  "Jamie's Got The Beer" is kind of a redneck twangy thing that really serves no purpose, and album closer "A Tribute To Hawking" is a hidden track that is a waste of time before the album repeats. As to the oddity?  "World Goes Around" has a very weird, Middle-Eastern vibe to it (is that a sitar I hear?) with kind of a trippy, dreamlike delivery that just doesn't work for me at all. Take these blips off of this record and you have a truly great flowing disc; leave them in and the album becomes rather disjointed and doesn't glide from track to track like it could.

So...after a week or so of repeated listening, what's the verdict?  To me, Hell Yeah! still doesn't top In Heat  as far as being a complete album, nor does it have some of the instantly classic songs that the first two records have.  However, when this album is at its peak, it is an excellent record, and even when it is slightly-off, it is still better than so many other attempted comebacks.  I can see myself keeping this album in rotation for quite some time, especially after ripping it to my mp3 player and leaving the weaker handful of tracks behind.  One of the best comebacks I have heard yet, especially from a band that was, for all intents and purposes, completely dead and buried just a few years ago.

Rating:  Crank this at 8 and prepare to get that goofy 80's grin back on your face as "The Saint" and Company are back!
Return To Reviews Index
Posted by arttieTHE1manparty at 5:55 PM