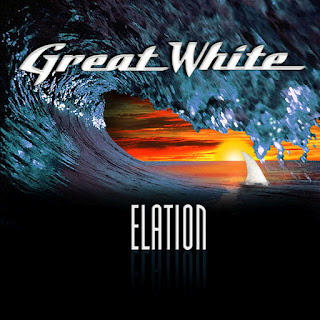 Elation.  An ironic title, because I can honestly say that for the first time I am NOT filled with elation when listening to a new album by my all-time favorite band, Great White.  I am sorry to say that this album is nothing short of a travesty, in my opinion, not simply because Jack Russell is not the singer (as he should be, no disrespect intended toward Ilous, whom I loved with XYZ...), but also because Kendall, Lardie, and Desbrow appear to have forgotten what the Great White sound is.

For more than half of this album, Ilous comes across as a near-clone of Jeff Keith of Tesla, which I guess is okay considering this record sounds more akin to that band (which I love) than to Great White.  But that is the problem, also.  Never on this album do you feel like you are listening to a Great White record.  Not once.  There are a couple of "almosts", but it is as if soul of the band is gone, both stylistically and vocally.  The songs aren't necessarily bad, they just don't have any life to them.  The signature bluesy sound that has always been Great White is totally lacking now, even on songs that should be right up the band's alley.  For example, "Hard To Say Goodbye" is the type of ballad that Jack was known for absolutely owning, but Ilous, despite his best efforts, just doesn't pack the vocal punch that Russell would.  The same can be said of the acoustic closer, "Complicated", which aches for the performance that you can hear Jack delivering.

The rocking numbers suffer, as well.   Album opener, "(I've Got) Something For You" sounds more like something Night Ranger has been doing than a Great White song (no disrespect to Night Ranger intended).  "Heart Of A Man" is just plain boring, and the barroom boogie attempt of "Love Is Enough" fails to bring any life to the latter part of the album.  "Love Train" feels lifeless and flat, which is frustrating because in the past the band would have added in a big, fat bottom end groove that would have had this "train" chugging along nicely, but here, it seems the "train" is stuck in neutral as this mid-tempo number goes nowhere.

To me, the best song, and the most Great White of the tracks, is "Shotgun Willie's", an uptempo number that, musically, sounds like it might have fit well on the Can't Get There From Here album.  Ilous' Keith impression continues here, but at least it works pretty well.  "Resolution" is another "almost Great White" track, reminding me a bit of "Mista Bone", but, as I mentioned with "Love Train", it is missing that groove that would have come so naturally on older releases, and, while Terry does a decent vocal turn here, you just KNOW Jack would have nailed the sass and attitude that this track is begging for.   "Lowdown" has a pretty good classic Great White vibe, but Terry's vocals just don't have the smoke and grit that Jack would have delivered here.  The same can be said for the only other track I can say I truly like, "Feelin' So Much Better"; Terry's vocals make it a solid, servicable track, but Jack's vocals would have owned this song.

Seriously, I don't know why Kendall and Co. were so adamant about keeping the Great White name when they did everything in their power to not sound like Great White!   I mean, come on...four tracks out of twelve that bear even a passing resemblence to Great White?  Why bother?  Granted, I realize it is a marketing thing, but come on...at least make an effort to please the fans that have stuck with you for all these years, because it's not like teenagers and early-twenty-somethings are clamoring for the reunions of these 80's bands--it's the hard-core fanbase that snaps up most of these albums and attends the rock-reunion festivals that pop up across the country every summer.  I can say with all honesty that there is no way I will be attending a Great White concert with this current line-up, because this is simply not Great White now, and I have serious questions about the band's ability to pull off the classic material live while somehow incorporating this new style and sound into their show.

Overall, this is not a terrible record...it's just a terrible Great White record and horribly disappointing.  If Elation had been released as a Kendall/Ilous side-project, I think it would have been a decent enough, solid-if-unspectacular, effort.  As it stands, this album is going to get more attention due to the dysfunctional state of the band than it is for the music recorded here.  Again, while not horrible musically, this is not a record that is going to be getting tons of airplay from me...or likely anyone else.  The one thing this record does, and does VERY well, is prove that Jack was the lifeblood, the heart, and the soul of Great White, no matter how much his former bandmates want to run him down on-line and in the media.  A major letdown from start to finish, with only brief stops at what could have been solid, if less-than-classic, Great White material.

Rating:  As a Great White effort, TURN THIS DOWN to a 3.5.  Even if you can get around the fact that this no longer sounds like Great White, I still wouldn't turn this up past 5, as it just doesn't have much life for 2/3 of the album.

Posted by arttieTHE1manparty at 4:29 PM