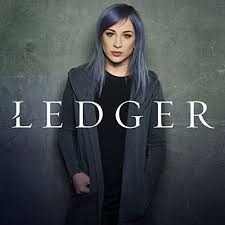 If you have ever had the chance to see Skillet in concert, there is usually a moment in time when the band's tiny-yet-fierce drummer, Jen Ledger, comes out from behind the kit to allow her to showcase her vocal talents away from the kit that hides her away for so much of the show.  Perhaps taking her cue from those concert moments, Ledger fully comes out from behind the kit here on her debut solo EP.  Lest one believe that this is something of a fracture of Skillet, the album was co-produced by Skillet rhythm guitarist/keyboard player, Korey Cooper, and the band's frontman and founder, John Cooper, lends his husky, snarly voice to one of the tracks here, as well.

The album kicks off with the lead single, "Not Dead Yet", a sassy rock number that incorporates piano, synths, and big drums, but don't expect any searing guitar licks to jump out at you, because that is not the direction of this track, or the EP, for that matter.  Ledger's voice sounds a bit processed in places, but that could also be partly due to the heavy use of electronics and synths in not only this song, but throughout the whole 6 track record.  She adds a clean ferocity to her vocals on the punchy chorus, while using a much more reserved, smoky...maybe even sultry...vocal approach on the verse sections, and her drumming, as would be expected, is top notch, with interesting patterns and fills throughout the song and EP.  I'm not sure anyone could have predicted the massive hit that this song has become, garnering airplay on not only Christian rock stations, but also on mainstream rock radio and even Octane on Sirius/XM.

"Warrior" is the biggest rock moment of the record, which is to be expected when John Cooper is in the mix.  However, the introductory moments of the track would not immediately indicate that, as a robotic-sounding Ledger leads things in with the repeated line, "Heart starts to pound, shaking the ground, this is the sound".  But then the drums hit and an edgy guitar riff kicks the track into full rock gear.  Not a fast song, but the heaviest thing on this record, this track alone should give Skillet fans all the reason they need to snag this EP.  The first verse is all Ledger, A cooing Ledger trill breaks up Cooper's snarling lines on the second verse, and the two pair up for a couple of lines here, as well, before Cooper gives way to Ledger for a couple of lines, with Cooper re-entering to shove the song into the chorus, which he participates in.  Big arena drum lines are present throughout this track, as is the gritty rhythm guitar, and Ledger's defiant stance vocals are the perfect fit for this track that usually ends up on repeat a couple of times when this EP is popped in by me.

"Bold" goes the other way from "Warrior", opting for more electronic elements and a softer vocal approach from Ledger, who manages to come across as sounding vulnerable on the verses, but empowered and strong on the chorus sections.  I will be very surprised if this track is not released as a single in the near future, as it is pure down tempo EDM ear candy, with no aspirations for big arena rock status.  The electronically enhanced drums and swirling, atmospheric synths supply a strong foundation for Ledger to really let her voice take the center stage here.

"Foreigner" is quirky and different than anything else here, as Ledger plays around with some nursery rhymes to forge the verses that run atop a bed of synths and programming before the chorus adds a solid punch with heavier drums and bass thumps, as well as a bit of guitar work.  Sure, this is more synthpop than the hard rock, but that chorus is just so catchy, and Ledger's voice so smooth and powerful, that it is virtually impossible to turn away from "Foreigner".  Ledger uses the song to point out that social media and reality TV are constantly perpetuating roles and ideals upon people that are virtually impossible to meet, creating self-loathing and misery in those people who try to pursue such things.  The title, "Foreigner", relates to the fact that we are foreigners in this world, destined to just pass through on our way to Heaven, and that giving in to the trappings of this fallen, dysfunctional world merely distracts us from our greater goals while on Earth.

"Ruins" is a true ballad, relying heavily on a piano and synthesized strings for much of the instrumental work here, as Ledger flexes her vocal muscle here, easily bouncing her voice up and down in range, and adding a whispery quality when required.  One thing that I truly appreciate about this track is that her voice sounds less processed than it often does when she's backing things up in Skillet, or even in other places on this EP.  Her backing vocal tracks here are powerful and provide a gorgeous echo to the lines here about love lost and learning to love again.

The album closes with the heavy bass dance groove of "Iconic", which like every other track here is catchy, hooky, and commands the attention of the listener, even if the style really isn't your cup of tea.  I keep going back and forth between this and "Warrior" as to which is my favorite track here (although "Bold" is definitely in the mix, as well), as both have just a bit more of a rock punch than some of the others that, with just a few twists and tweaks, could allow for them to be Skillet songs.  But Ledger avoids that trap and takes "Iconic" in more of an EDM direction than modern radio rock.  If you listen closely, there are some killer percussive moments here, with Ledger adding some fun twists to the typical dance floor beat of most music today.  I would have loved to hear a guitar solo rip through this track instead of the synth solo that we are given, but I totally get it and appreciate her determination to not go the Skillet route, which would likely have been very easy to do.  Some nice programming elements are mixed in, and there's even a brief moment when all the music stops and it's just Ledger's voice that we are hearing before the hip-shaking groove kicks its way back into the mix.  A great, fun way to close out a surprising EP.

Mine is a digital copy, so I am unsure of packaging or anything of the like.  The production is even-handed, with the synths staying back in the mix when necessary to allow Ledger's voice to fly, and stepping up to fill the solo voids left by a lack of consistent guitar work.

Rating:  Its hard not to like what the young Skillet drummer has done here, so crank Ledger to 7.5!