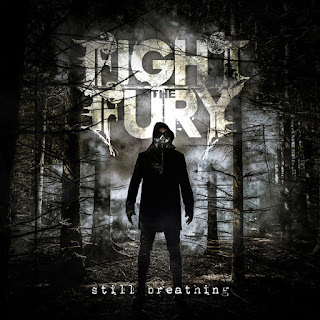 2018 was an interesting year for the biggest band in Christian hard music, Skillet, and a great year for their fans.  First, the band re-released their latest album, Unleashed, near the end of 2017 with numerous new tracks and updated artwork, calling it Unleashed Beyond.    At least one of the new bonus tracks charted, with others gaining airplay as well, in 2018.  Then, drummer Jen Ledger stepped out from behind the kit to release her debut solo CD, the excellent EP Ledger.  And then, lead vocalist/bassist and band founder, John Cooper, released this EP with his new side-project, Fight The Fury.

When you first look at Fight The Fury, you can't look past the fact that the band is half of Skillet, with that band's guitar player, Seth Morrison, joining Cooper here.  To be honest, the band is like 5/8 Skillet, because the other guitar player, John Panzer III actually auditioned for Skillet at one time, but was reportedly turned away because of his age (he was only a teen at the time of his audition).  Then, when you hear the first line of "My Demons", the first track and lead single from the EP, it is immediately obvious that this is Cooper's voice blaring out at me from my speakers.  I mean, the guy just has one of those voices that is instantly recognizable, even in the sometimes cookie-cutter vocal world of modern hard rock.  John Cooper sounds like John Cooper, end of story.

But, the similarities really end there, as Fight The Fury is a significantly heavier band that Skillet.  In all honesty, the only track that Skillet would likely ever attempt to do as a band would be the previously mentioned "My Demons", which it could be argued really is just a heavier, less-programmed version of a Skillet song.  I don't have any problems with that line of comparison being drawn, and I am sure that has something to do with why that particular track was chosen as the first one to hit radio; there is a comfort factor here that I feel was designed to ease the listener in to what was to come.  The guitars are more in-your-face than they tend to be on all but the heaviest Skillet songs, and there is a lot more of an aggressive feeling to the rhythm guitars and the drums, which hit particularly hard all throughout the EP.  You can even hear some double bass work in places on the track, which has pretty much become the standard for any band in the 20-teens metal scene.  But the comparisons to Skillet pretty much end after "My Demons" ends and the blistering "Dominate Me" kicks in.

"Dominate Me" has an absolutely crushing approach that Skillet would never touch, as it would scare off a good chunk of their audience!  A hard-hitting rhythm guitar rips through the speakers first, before Cooper barks a gruff "Go!", and the band is off and running.  Reminding me of Sevendust in the way the guitars come out so choppy and angry, and Cooper's voice bounces across the top of the rhythm of the track, always threatening to break out into an aggro-metal scream, but never quite cutting loose.  Morrison's guitar solo here is perfect, really showing that he has as much talent for this type of music as he does the closer-to-the-vest hard rock of his day gig.  The bass rumbles pretty hard here, also, and the drums are fantastic, as they are throughout the record.

"Still Burning" is probably my favorite track on the EP.  Again utilizing that hard, choppy guitar style of the first couple of tracks, "Still Burning" has a guitar tone that reminds me of old school Metallica, and the drum patterns on this track would likely have Lars Ulrich's approval as well.  This is not to say the track sounds like Metallica across the board, because it does not, as it remains far too modern for the Metallica comparison to be drawn in a straight line.  However, I don't believe for a second that the hints of Metallica are not unintentional, as Cooper has long stated that the Bay Area Thrashers are a definite influence on him musically.  Cooper unleashes some pretty good screams on this track, but also utilizes a harshly whispered approach on the opening lines of each verse section that really sets the barks and screams apart.  Good, good stuff, and once again, the guitars are absolutely spot on for a track such as this.  This should be the second single, in my opinion, and should hit not only the Octane crowd, but also Liquid Metal, and any mainstream rock/metal station out there that still plays what the audience is going to scream for.

"I Cannot" is the "slowest" track on the album, which is ridiculous to say, because the only slower part is actually the chorus sections, and even those aren't withing shouting distance of a ballad or anything like that.  This is the track that utilizes the most electronic elements on the EP, and it is on this track that Cooper revisits a bit more of the melodic vocal approach that he has used in his main band.  The chorus is more Skillet than any other track other than "My Demons", but it doesn't do anything to diminish the song.

The album closes with another metallic assault in "Lose Hold Of It All".  The first section is more punishing rhythm guitar punches to the gut and kick drum blasts to the face, layered upon by Cooper's darkest, harshest vocals from the EP.  There is a killer guitar solo before the final run through the chorus, then after a false ending, some seriously frantic, fret-running guitar acrobatics to lead off the outro section of this track, which is my second favorite of the record.  Again echoing some of the more progressive thrash stylings of ...Justice-era Metallica, this is a super-fun song to listen to and really puts a bookend on the project for me.

Also of some interest to fans will likely be the fact that Cooper has repeatedly said in interviews that where Skillet is an openly Christian band, Fight The Fury is not.  That does not mean that Cooper denies his faith or anything like that, but this is a far darker project, lyrically, than anything Cooper has worked on before.  "My Demons", for example, is about the sexual abuse of a child and the damage that is done to that child.  I have some fairly serious questions about the lyrics of "Dominate Me", as they definitely seem to have an ambiguity to them that could easily lead a listener to find a sexual slant to them, although I have read that they are actually about a lost person looking for someone...anyone...to completely devote yourself to when your world is crumbling.  On the flip side, despite sounding angry and aggressive as snot, "Burning For You" comes across as a modern metal worship song of the highest degree, which is awesome, as Cooper screams, "Your's eternally, I'm still burning, I'm still burning... Still burning true, for You".  I know that "My Demons" has been picked up by numerous Christian and positive rock stations across the nation, and there is certainly nothing evil about any of the songs here, but I have a hard time envisioning "Dominate Me" being accepted by most of these same stations.

I know there are physical copies of the CD available, but my copy is digital, so I cannot speak to the packaging.  However, since it is release by Atlantic Records, I am guessing there is at least a moderate amount of work put into the packaging.

Production is crisp and clean, the separation of instruments is solid, and the vocals are mixed extremely well.  The bass is present throughout the EP, and the teamwork on the guitars, and the heavy hitting from the drums, leaves me wishing this was at least a couple of songs longer, if not a full album.

Rating:  Far, far better than I was afraid it might turn out to be, I would crank this to 8!  I love this more and more with each spin; I just wish it spun for more than 20 minutes.

Posted by arttieTHE1manparty at 5:32 PM