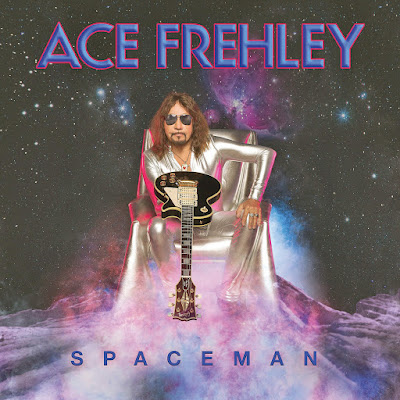 As his former bandmates in KISS prepare to go on their "final" tour, original guitarist, Ace Frehley, just keeps cranking out new albums.  This one, Spaceman, is his third new release in the past 4 years, which is quite a churning out of material from the 67 year-old axe-slinger, especially when you consider it has been almost seven years since the last KISS studio effort.  And while his is not likely to ever top his solo album from 1978 (EASILY the best of the four KISS solo records from that year), or his first couple of Frehley's Comet records, it is always fun to see what the Spaceman will come up with next.  In this instance, Ace has seemingly returned to his 70s hard rock roots a bit, which is fine by me.  But, as always, Ace has a couple of surprises up his sleeve on this record.

For starters, KISS bandmate, Gene Simmons, co-wrote and appears on bass on the album's opener, "Without You I'm Nothing".  This song is a perfect example of what Ace has always done best; straight-forward hard guitar rock, a la mid-70s KISS.  The track rolls along nicely, with Simmons' bass rumbling in the background as Ace builds to a big guitar solo that you can just instantly tell is Frehley, as his tone and style are pretty much unmistakable if you have been a fan of his, or of early KISS, for more than 15 minutes.  His vocal approach is also rather unmistakable, as his "singing" falls somewhere south of singing and just north of spoken word at times.  Not the album's finest moment, but a solid opener that should have fans fairly expectant right off the bat.

Ace doesn't disappoint with the next track, "Rockin' With The Boys", which feels like it could have come straight off that classic 1978 record.  In fact, the track was written in the 1970s, and it has a definite classic KISS feel to it.  In fact, I'm kind of surprised there hasn't been some sort of lawsuit filed by Paul and Gene to try to lay claim to the track as it was written during Frehley's first stint with the legendary band.  The call-and-response backing vocals have a very Gene-led KISS feel to them, although Simmons is not featured here.  Ace's guitar sounds retro-fresh here, and "Rockin'..." is definitely one of the top three songs on the album, and top five or six Ace has released since he went fully solo and dropped the Frehley's Comet name with 2009's Anomaly album.  Good, good stuff.

"Your Wish Is My Command", another Simmons co-write, feels like a slower "Shout It Out Loud" as far as the melody line goes, but the guitar solo here is leaps and bounds better than the one on "Shout It Out Loud".  Nothing overly special, but nothing deserving of the skip button, by any means, and as far as I am concerned, the album starts off 3-for-3.

Well, actually, it's 4-for-4 with "Bronx Boy" being another top track from not only this album, but also Frehley's solo career.  The guitars are snarly here, and Ace's vocals are about as good as they get from him here as he recalls his youth experiences in an Irish street gang back in the Bronx in the 60s.  Ace also supplies the bass for this track, and the man has a true knack for that instrument, as well, as it has a definite presence in this track and is catchy as heck!  References to switchblades, zip guns, and rumbles date the lyrics a bit, but that's part of the fun here, and let's face it, we're all here to feast our ears on the guitar solo that Ace absolutely tears into on this neat-and-tidy, sub-3 minute rocker.  This is the type of song that Ace is made to play and he owns this track fully.

"I Wanna Go Back" is an Eddie Money cover, and I was surprised at how well it actually works here.  Ace sings more here than anywhere else on the record, and the extra flair added to the guitar sections of the song really make it stand out from what Money did.  Now, don't get me wrong, I'm not declaring this the superior version of the song, because Eddie Money dominated that song back in the day, but this is a pretty good run at a classic song.

The other track where Spaceman absolutely hits fully is on the album's closer, "Quantum Flux", which finds Ace doing what ace does best, and that is shredding his guitar strings.  As he is often wont to do, Ace wraps up the album with an instrumental, but this time he takes a bit of a prog rock approach, which he handles with great skill.  More than 6 minutes long, this is a great way to close things out, with Ace getting some acoustic guitar assistance to support his electrified work, and the writing on this song is some of the best on the record. All in all, a very cool song with the added bonus of not having to listen around Ace's vocal limitations to hear the exceptionallity of the music.

The remainder of the songs here range from pretty good to musically excellent, but are frequently hampered by clumsy, forced-rhyme lyrics, which if we are honest with ourselves, all of KISS' records have been guilty of at times.  "Pursuit Of Rock And Roll" has some of the tastiest guitar work on the record, with a scorching solo (and a really tasty outro, as well), but the clunky vocal style and chuckle-worthy lyrics take a portion of the song's effectiveness away.  "Mission To Mars" is the hardest rocking track here, with some absolutely stellar guitar work, and while the lyrics are meant to be cheesy and fun, they stretch things a bit too far for my taste.  "Off My Back" would be the "pretty good musically" track I referenced above, as there is really nothing special about this one, and the lyrics (and vocal approach) just make it that much less interesting.  I'd have to say this is the only real "filler" track on the record, but with only 9 songs total, Spaceman can't really afford the luxury of fluff.  That being said, the guitar solo almost saves this plodding, mid-tempo rocker...almost, but not quite.

I've heard a lot of negative talk about this album, and frankly, I don't get it.  This is Ace Frehley doing what Ace Frehley does.  Did people think he was suddenly going to become a fantastic singer?  Were people expecting big, symphonic metal pieces, with strings and multiple layers of vocals?  All in all, this is an album that is at least comparable to every solo Frehley album that has been made, and probably my second...maybe third...favorite of his solo catalog.  Again, he was never going to touch the magic of the '78 record, but I feel it is a slight step better than Anomaly, and probably just as good as the surprising Space Invader.

The packaging is nice, with a big, fold-out poster of Ace on the inside.  Lyrics would have been a nice touch, but it's not like Ace is hard to understand (you just don't always understand why he's singing what he's singing...).  The production is solid, if not flashy, and has enough grit to make it obvious Ace is doing this because this is what Ace does:  show up, plug in, rock out, period.

No, he's not back in his New York Groove, but this Bronx Boy ain't done rocking you yet.  And he's doing it with more heart and soul than KISS has shown since Psycho Circus!

Rating:  Better than many would have you believe.  I crank this to 7, and if not for the lyrics on a few tracks, it may have been an 8.

Back To Reviews Index
Posted by arttieTHE1manparty at 4:02 PM