FLOTSAM AND JETSAM "The End Of Chaos" 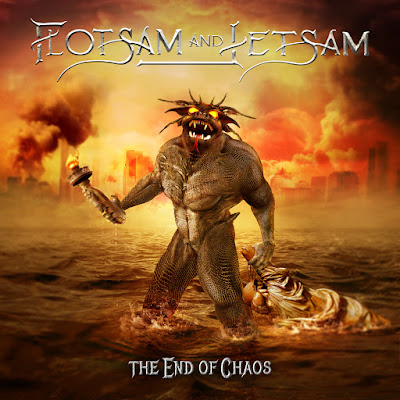 It has been more than 30 years...33, by the time this album hits stores...since Phoenix-based thrashers, Flotsam And Jetsam, released their debut album, Doomsday For The Deceiver.  While that was a good precursor of things to come for the band, it was their follow-up, the absolutely must own thrash classic, No Place For Disgrace, that really showed just how impressive this band was, combining pure speed and adrenaline thrash tinged with hints of progressive metal and featuring the wail of lead vocalist, A.K. Knutson.  Their third album, When The Storm Comes Down, was a frequent spinner on my show on the college radio station I worked at, as was the aptly-titled fourth effort, Cuatro.  I truly felt that F&J was destined to become at least as big as Testament or Metal Church in thrash circles, but for some reason, fate had a different idea for the band, as numerous line-up changes, label changes, and 4-5 year long gaps between albums slowed the momentum the first few records had built up.

While it has been a bit of a stretch since the band was at their commercial zenith, there has never been a let up in output, although some of the band's post-Cuatro efforts were somewhat subpar compared to those first four records.  Then, in 2016, the band came out with their self-titled release, sounding like a completely rejuvenated machine, firing on all cylinders and out to show that they were not dinosaurs among the other younger bands in the heavy metal/neo-thrash world.  I was honestly taken by surprise by the ferocity of some of the tracks on Flotsam And Jetsam, and thought that that record was an amazing way to call it a career.  But not only was Flotsam And Jetsam not the band's swan song, it was simply a precursor to the blast of metal they unleash on this new record, The End Of Chaos.

The album kicks off with "Prisoner Of Time", a track that sounds like what you might expect if Iron Maiden wrote a thrash song.  Maiden-esque twin guitars anchor the track, which also features melodic, layered vocals, and high speed drum fills that immediately let the listener know this is no "old guy's metal" going on here; these guys are here to kick your butt!  I have to admit that this song took me a bit by surprise at first, as there is definitely a melodic quality to the track that had not been present in Flotsam And Jetsam for a few years.  Michael Spencer gets to show off his stuff on bass in a couple of different places, which is very cool to hear, and the guitar solo on this track brought a smile to my face almost instantly, as I was taken aback by the speed and fury it was attacked with, while still retaining such a melodic style.

Track two kicks the high speed thrash into gear, lest the listener believe this was to be a more power metal-styled release.  "Control" is pretty much just an adrenaline rush set to music, with Knutson adding a bit more coarseness to his vocals, which sound every bit as good today as they did when I first picked up Doomsday For The Deceiver all those years ago.  The song is extremely tight, with no sloppiness in the rhythm guitars or the bass, which can sometimes be an issue with bands trying to rip through a high-velocity song such as this one.

"Recover" slips back into "Maiden And Jetsam" territory, but dangit if they don't pull this style off amazingly well.  As much as I was seeking a full-throttle thrash attack, I find myself enjoying these heavy-yet-marginally-restrained melodic moments more and more with each spin of The End Of Chaos.  Knutson's vocals are just an absolutely perfect fit for this type of song, and Mary's galloping drum style sets the tone in such an obvious way that it feels like this is what Flotsam And Jetsam has been doing their entire career.  While I realize it will likely never happen, I can't help but wonder what would happen if F&J decided to throw down on a couple of Maiden tunes for a covers album.  I can just hear "Run To The Hills" with Knutson on vocals and the grittier, thrashier styled guitars when I listen to "Recover".

"Prepare For Chaos" is back to the thrashier, grittier style that F&J is more known for, although it is still not at full-octane speed, like "Control" was a couple of tracks earlier.  For older fans, this track reminds me a bit of the way the band tackled "Saturday Night's Alright (For Fighting)" on No Place...

"Slowly Insane" changes that up, as this is a blistering, high speed affair that really showcases the greatness of Ken Mary on the drums.  Tempo changes, crushing double-kicks, abusive rolls, and churning fills accentuate the fret-melting tandem guitar work from Gilbert and Conley, which includes an insanely speedy solo run that simply has to be heard to be believed!  Knutson works a bit more in his lower register here, but still elevates to a piercing wail when necessary.  Simply excellent stuff here!

"Architects Of Hate" sounds like it came straight out of the 80s Bay Area Thrash scene, which is a beautiful thing for me, as that is the era of thrash that I cut my metallic teeth on!  Knutson is spot-on here, sounding like he could easily slip back into "Hard On You" mode from No Place For Disgrace, and the swirling guitars and rapid-fire drums remind me of the best stuff the band has ever released.

There are simply no weak cuts here, no moments of the band letting up on the creativity or the aggression.  Whether thrashing along to the bass-heavy "Unwelcome Surprise", or the chugging, churning "Survive", with its tempo changes and altered time signatures, or the quirky intro section of "Good Or Bad", complete with tribal drum patterns that are staggered with the rhythm guitar sections, Flotsam And Jetsam keeps the listener plugged in and on constant alert for something new to smack them across the face as they turn the corner from song to song.

Rather than close on a somber moment, as many albums are wont to do, Flotsam And Jetsam attacks you one last time, as the aptly titled "The End" is one of the fastest tracks on the record during the verse sections, but has a bigger, sweeping, more melodic chorus section where Knutson wails, "I can see the end is taking over, and it always brings me down" as he laments the state of society today.  The vocals on the chorus section are intertwined and layered beautifully, and Conley rips through one last blistering solo as Gilbert lays waste to another set of strings on the rhythm runs here!  A perfect ending to one of the best melodic thrash albums I have heard in YEARS!  As great as the Necronomicon release was earlier this year (2018), I think F&J may top it in 2019 with The End Of Chaos, which is really saying something!

Speaking of "The End", when asked if The End Of Chaos was truly "the end", Knutson exclaimed, "Hell, no!", emphasizing the band has no intentions of quitting, which is a great thing for metal.  While Knutson admits that some of the previous versions of F&J were simply touring bands, or as he put it, "a lineup...that was just together to go out on vacations and then have the promoters pay for it," this new version is the real deal, out to cave your head in while you enjoy every thrashtastic moment of it!  As long as Knutson's voice holds out, and as long as Gilbert and Conley keep writing infectious, hook-filled thrash while ripping out their blistering twin-axe attack, Flotsam And Jetsam is going to be one of the highlights of the metal scene for me.  The addition of Ken Mary on drums, solidifying the already bedrock bottom end that Michael Spencer has so capably kept rumbling for the past several years, is simply the chrome polish on a finely-tuned metal machine.  Hopefully this line-up will come out of 2019's European touring with Destruction and Overkill, and head straight back to the studio for another full-on metallic onslaught.

It should be noted that the production here is excellent, with every instrument heard cleanly, including the bass which is often lost in the thrash mix, especially on older albums.  The production is modern in approach, but still retains the grittiness that is essential on a thrash album; clean, but not polished.  The rhythm section is given plenty of punch to drive the songs, and Knutson's vocals are perfectly leveled in the mix.  Big-time credit and thanks should go to Jacob Hansen who mixed, mastered, and produced the record, and gives Flotsam And Jetsam the kind of sound necessary to propel them across the metal landscape of 2019 and 2020.

It is simply amazing to me that some bands continue to put out quality material after 15, 20...even 30 years, while other bands can't string two albums in a row together without losing track of who they are or what they sound like.  Flotsam And Jetsam may have the most complete album of their 13 disc catalog on their hands, and that's saying something!  While maybe not quite as dynamic as their classic No Place For Disgrace, there is no question for me that The End Of Chaos is their heaviest album yet, and definitely a Top 4 album for these legends, possibly even Top 3!  Thrash fans...and metal fans, in general...simply must seek this album out when it is available in 2019!  What a great start to a year!

Rating:  A definite cranker, here!  Turn this up to 9 and mosh away, friends!