NAZARETH "Tattooed On My Brain" 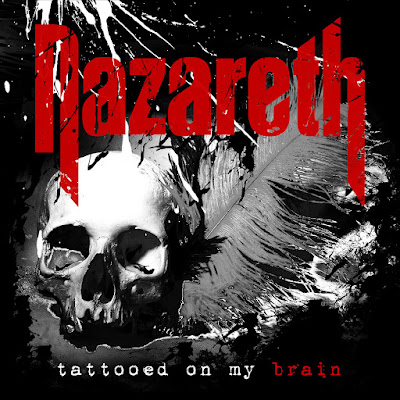 2018 marked the 50th anniversary for legendary rockers, Nazareth, and to celebrate, the band released their latest effort, Tattooed On My Briain, on Frontiers Records back in October.  This is the 24th studio album for the band, and their first since 2014.  That record, Rock N Roll Telephone, was the last for original lead vocalist, Dan McCafferty, who was forced to retire due to health issues.  So, with only Pete Agnew remaining of the original line-up, just how Nazareth is this version of the band going to sound?   First, you have to keep in mind that guitarist, Jimmy Murrison, has been on board for more than 20 years now, and Pete's son, Lee Agnew, has been pounding out rhythms on the drums since 1999, so the only "new" face here is vocalist Carl Sentance, who does a more than serviceable job on the microphone throughout this record.

If I had to choose a favorite from the record, the opening cut would serve just fine, as "Never Dance With The Devil" rocks harder than anything else on the record, and finds the band moving forward with their style and sound, but without forsaking who they have been in the past.  Lee Agnew leads the track in before giving way to some thick power chords from Murrison, supported by Pete's strong bass presence, and the new voice of the band, Carl Sentance.  Sentance has a considerably higher range than McCafferty did, and he sings with a cleaner voice than the whiskey-soaked rasp of the original vocalist.  Some readers may be familiar with Sentance from when he fronted Krokus for their 1999 album, Round 13, and that band is an obvious point of comparison for another of the best tracks here, "State Of Emergency", which has something of a "Ballroom Blitz" feel to it.  Once again, the strong bass from Pete Agnew, who actually gets a brief solo section on this track, is a major part of the overall sound, and the great guitar solo here from Murrison is spot-on for this uptemo rocker.

Other favorites here would be the times the band reaches back a bit to the bluesier style they always incorporated into their earlier work.  Two excellent bluesy cuts "Push" and "The Secret Is Out" fall in line back-to-back and feature some excellent dirty blues guitar from Murrison, and both find Sentance sounding very reminiscent of AC/DC's Bon Scott. The bass and drums for both are rock solid, with the elder Agnew playing deep in the pocket here, churning out a strong support structure for these mid-tempo rockers.  "Don't Throw Your Love Away" sounds like a musical collision between Cinderella and Led Zeppelin, to be honest, a bit of the former's hair sound blended with the latter's hard-edged blues riffage, and it really works well musically, even if the lyrics are a bit simple, particularly on the chorus.  Other standouts would be the catchy, "Crazy Molly", with its sassy, bump n grind rhythm and cool guitars (not to mention the closing gong!), the heavy rocker, "Silent Symphony", with it's classic Deep Purple guitar riffing, and "Pole To Pole", which is a more uptempo rocker, with a catchy hook and a strong guitar solo, that will again likely draw comparisons to AC/DC or, more modernly, Dirty Looks.  You can give the track a listen below on the official audio release from Frontiers.

I also have to admit to loving the cleverly-titled "Rubik's Romance", with its cheeky opening line, "More complicated than a Rubik's/More sides and colors, its always changing...".  This is a great track with some of the most creative lyrics I have heard in some time, to be honest.  It's nowhere near as slow as, say, "Love Hurts", but it is definitely one of the more down-tempo tracks on the album, and regardless of speed, "Rubik's Romance" is a really fun listen!  "Change" is pretty much a straight-up blues rock number, especially on the verses, before the band kicks things up a notch on the punchy chorus sections.  Good, good stuff here!

At 13 tracks, there is a bit too much here, and I think a couple of tracks could have been cut fairly easily.  For starters, I'd actually cut the title track, which is too poppy for the rest of the record, in my opinion, and I'd probably drop the moody closer, "You Call Me", which features Pete taking a run at the lead vocals.  It's not a horrible song, but doesn't fit anything else on the record.  If you are Nazareth, and you likely don't know when you're going to have the chance to record again, I get why they laid down as many tracks as they could.  Plus, Tattooed... gives the band a chance to showcase the new direction the band is steering the Nazareth ship in, which I think they do more than successfully for the majority of this surprisingly good record.

Mine is a digital promo copy, so I am not sure of the packaging here, but since it is Frontiers Records, I am going to assume the packaging is at least above average, if not excellent.

In a year that saw a LOT of 70s hard rock bands reunite for another run with great albums (Uriah Heep, Saxon, Ace Frehley, etc), Nazareth has produced one of the best with a solid collection of new songs, a few of which I am sure will find their way into set lists for the next decade or so.  Not the classic of Hair Of The Dog or Razamanaz, and not as heavy as No Mean City, which are my top three albums in the Nazareth catalog, but Tattooed On My Brain is definitely a quality release that is a fun listen, even after repeated plays.