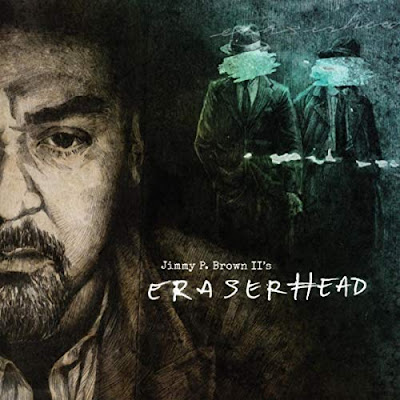 If you know anything about the Christian heavy metal scene of the 80s and 90s, you likely need no introduction to the name Jimmy P. Brown II.  And if you know anything of the thrash metal scene from that same time frame through the current, again, Brown's name is not unfamiliar to you, as he is the founder, lead vocalist, and rhythm guitar player for the band Deliverance.

But if you are a fan of Deliverance, you also know that there is a definite split personality for that band.  There is a fairly expansive chasm of style separating the two approaches of the band.  On one side, you have the thrashiness of the self-titled debut record, the thrash masterpiece (Christian or secular) that is Weapons Of Our Warfare, What A Joke, or more recent efforts, such as the somewhat surprising return of Hear What I Say, or this year's excellent The Subversive Kind.  On the other side of the musical divide is the darker, moodier, heavy-yet-more progressive version of the band, which released some absolutely amazing music on records like personal favorite, Learn, as well as River Disturbance, Camelot In Smithereens, the oddity that is Assimilation, which seemed to try to span the gap while also throwing quirky electronica elements into the mix, and the middle-of-the-road-stylistically As Above, So Below.  And, it seems, most of the band's fans fall into one camp or the other, with very few of us straddling the rather significant fence that separates the two styles.  As I have mentioned before, I have loved this band since its beginnings, and I can honestly say I love both versions of Deliverance, although I spend more time with the progressive version of the band these days than I do the thrash version, and so I was particularly excited when I heard that Eraserhead was going to see the light of day.

Eraserhead, for all intents and purposes, is the same Deliverance that released Learn in 1993, minus the keyboard player.  Brown, Morales, and Knox were the band on that record, and they have returned 25 years later for this new album, which I could not be happier about, since, as I mentioned above, Learn is my favorite album in the Deliverance catalog.

It should be noted that this is not being marketed as a Deliverance album, as both the album and the band are called Eraserhead.  This is by design, I am sure, since Deliverance made their spectacular return to their thrash roots earlier this year, and Jimmy likely wanted to keep the two albums separated by name as much as they are by sound and style.

The album starts off with the moody "Ego", which starts off with a hard hitting drum-and-guitar lead in, before settling into a bass-heavy mid-tempo progressive metal number, complete with Brown's Bowie-meets-Tate tenor vocals soaring effortlessly above the musical fray.  The combination of Morales' bass and Knox's drums is punchy and powerful, aided by Brown's always impressive rhythm playing, but it is his solo work here that is something of a surprise treat.  Not amazingly flashy or blisteringly fast, Brown proves himself to be more than competent on lead guitar.  This is a great start to the record, as "Ego" sounds like it could have been taken straight from River Disturbance, the music flows that well despite the more than 20 years that separate that record from this one.

Likewise, the bass punch that kicks off "Stained" is very reminiscent of the bass that intros the song "Sanctuary" on '93's Learn album, although Brown's lead guitars here sound more in line with something off of a 70s classic rock album in places, before Jimmy shows off a bit of what he is capable of on a big, screaming guitar solo.  Morale's bass is a huge presence throughout the track, and Knox is equally strong.  This is an instantly catchy song that builds upon "Ego" in both texture and tempo, before giving way to the faster-still, "Indecisive".

Once again, a 70s blues-styled guitar lick opens things up, before Jimmy kicks into a lower-registered Bowie-influenced vocal line.  A full-on funk-rock track ensues from here, with Morales playing up and down the neck of his bass, Knox wailing away behind him, as Jimmy again launches himself into a pretty impressive guitar solo.  There are some supporting female backing vocals in the verse sections here that really work well on the fastest track of the record to this point.

Things turn down tempo-wise once again on "Entertaining Angels", which is actually a Newsboys cover.  However, I can guarantee you that Newsboys never play this track in this way!  Definitely heavier, yet still poppy in all the right spots, there is an urgency to this track not found on the original, which can be directly attributed to Brown's vocals and the wailing guitar lick that runs in the background throughout the track.  The melody from the original is largely there, but that is about all, as Deliv...err...Eraserhead tackles this song head on and makes it their own.

"The Scales" is one of the lighter moments on the record, with a less-progressive, less-moody take on things.  The Beatles-like "aaahs" behind the chorus lines are an interesting touch, as is the dreamy, 70s-inspired interlude, complete with swirling backing guitars, echoing reverb on the vocals, and psychedelic wah-wah effects on the lead solo.  Again, Morales is a big presence here and his talent is such a big part of what made 90s era Deliverance the musical powerhouse that it was.  I am so glad he came on board for this project.

"Memoria" may be my favorite track on the album, as it is the perfect representation of where this album is musically.  Very similar in rhythm and tempo to the previously mentioned "Sanctuary", "Memoria" would have fit perfectly on 1993's Learn album, but in no way does it sound dated here.  Jimmy's vocals are absolutely spot-on here as he powers across the surface of Knox's steady rhythm and Morales' thumping bass.  Mid-tempo and melancholy, this is exactly the type of song I have been seeking from any of Jimmy's projects and albums of the past several years.  Again, Brown proves his worth on lead guitar, and nifty little flamenco guitar part is even dropped in for good measure, before the perfectly layered vocals have Jimmy answering Jimmy through the chorus section.  A progressive metal masterpiece, "Memoria" is well worth skipping to, although you'd be bypassing some excellent music in doing so.  This song never fails to garner a repeat when I am listening, it is that amazing to my ears.

"A Story Of Time" again lightens the mood a tad, with the guitars cleaned up just a bit and used in a more rock/less metal manner.  The drums are not as dense, the bass not as thick, and Jimmy's vocals have a less moody air about them.  The production has a lighter hand here than on other tracks, as well, giving it a brighter feel overall.  Jimmy's spoken bridge reminds me of several of the interludes used by Queensryche on Operation MindCrime, but with nowhere near the darkness.

"The Swell Lot Of Thieves" retains more of a hard blues-rock approach, but it works well. Once again, the guitars don't have the metallic edge here that they do in other places, sounding dirtier, even "grungier" here for much of the track, and slide guitars are incorporated into the song, as well.  Jimmy's vocals take on a more spoken-word style through the verse sections, although he returns to singing on the choruses,  The solo section is quirky, to say the least, and Jimmy showcases a diversity of styles on his guitar.  Not my favorite track, but definitely interesting and worthy of inclusion here.

If "Memoria" is my favorite song, "Digital Postage Stamp" is definitely in the top three.  Starting off in a manner very much akin to Queensryche's "Eyes Of A Stranger", as far as style and tempo, this song is considerably heavier than the previous two, with harder hitting drums and a big cymbal presence, as well as a punchier bass approach.  Eric Clayton of Saviour Machine lends his considerable vocal talents to the backing support for Brown here, on this five-plus minute long melodic rocker.

The album closes with my number two track, "The Watchers", with Clayton again providing background vocal assistance.  Clocking in at just under seven minutes, "The Watchers" carries a "Silent Lucidity" approach for the first minute and a half, or so, with a big bass line and sparse use of guitars and drums, as Brown runs his vocals from soft and introspective to a more Gothic sounding wail.  The guitars and drums hit pretty hard in the chorus sections of the song, with a big, sweeping guitar solo soaring in at the four minute mark, once again highlighting that were it not for his duties on rhythm guitar all these years, Brown could likely have handled the lead duties on those 90s-era Deliverance records.  Call and answer backing vocals in the chorus section are nicely done, and the drums from Knox here are among the best on the album.

The production is superb, with Brown producing, mixing, and recording the record himself (mastering was done by Rob Colwell).  The packaging is top-notch, as well, with a 12-page booklet featuring color sketches of the band members, full lyrics, thank-you's and writing credits.

He started the year and ended the year in big fashion, did Jimmy P. Brown II, first with Deliverance and now with Eraserhead.  Where he goes from here, I am unsure, but I know that I hope both projects make appearances again in the not-too-distant-future.  His is a talent that few can match, in my opinion, and I sincerely hope that more people outside of the Christian metal world come to know just how great his music is, regardless of what style he is playing.  (Don't forget his full-on progressive rock band, Jupiter VI and their great, Floyd-ish album, Movable Walls from a few years back).

Rating:  Pure and simple, this is a great record that NEEDS to be cranked!  I have no problems giving this a 9!

Back To Reviews Index
Posted by arttieTHE1manparty at 3:08 PM