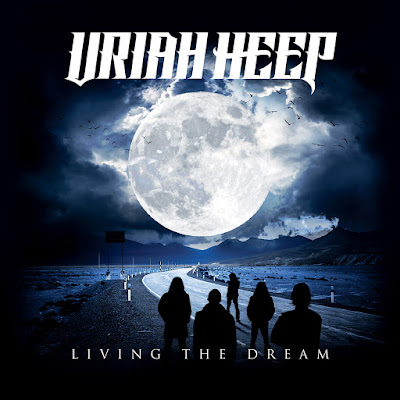 So...here it is, the tail end of 2018, and I am reviewing a new Uriah Heep album.  Yes, THAT Uriah Heep, as in Very 'Eavy...Very 'Umble from 19-freaking-70, Uriah Heep!  As in, 19-freaking-72's "Easy Livin'" Uriah Heep!  And while only Mick Box remains from the original line-up, two other members (Lanzon and Shaw) have been on board since 1986, so even 3/5 of the "reformed" version of the band has been around for 32 years!  That is borderline insanity, my friends!

I'm not going to go into the band's full backstory, as any band that has been around for 48 years has plenty of backstory to tell, and I don't have that kind of space.  But I will point out that Uriah Heep has been consistently releasing records for the entirety of their career, with Living The Dream being the 25th entry into their studio catalog.  And, as one might imagine, a band with that kind of catalog has some albums that are more hit than miss...and a few others that swing the other way.  So, understanding that, where does Living The Dream fall?

For starters, the band still retains relatively the same 70s-inspired classic hard rock sound it has utilized for the vast majority of their catalog, falling in that Deep Purple, UFO, Who, even Rainbow realm.  Heavy use of the Hammond organ, mixed in with pretty straight forward rhythm guitars and typically solid bass lines, some rather good drum work, with Box's powerful, hook-laden, catchy-yet-not-flashy lead guitar solos is pretty much standard fare on a Uriah Heep record, and that formula holds true here, as well.  But, as with most all of Heep's catalog, it is the impeccable harmony vocals that really stand out, at least for me.  Remember, this band was born in an era where members not only played their instrument, but they also held their own with backing vocals, and few bands have done this as well as Uriah Heep has.

From the opening moments of "Grazed By Heaven", it is pure Uriah Heep rock n roll on this album, and I can't imagine any longtime Heep fans (Heepers?  Heepees?) not diving headfirst into this record and grinning from ear to ear.  While some of the record comes across as a bit formulaic ("Take Away My Soul" sounds very been there/heard that to me...well done, no doubt, but not overly original), there are multiple moments where even a casual fan, such as myself, can't help but utter an awed, "damn!".  Case in point, the track that I feel the album pretty much revolves around, "Rocks In The Road".  Borderline Who meets Deep Purple...with a bit of Tesla tossed into the mix (the intro guitar riff sounds like it was lifted STRAIGHT from "Modern Day Cowboy")...this eight-plus minute prog rocker sounds like it could have been just at home on an album from 40 years ago, yet it still manages to sound fresh and energetic.  The tempo change on the last vocal bridge of the track is merely a launching spot for the real work of the song, as a droning bass line paves the way for a building organ presence, a gritty guitar riff, and ever escalating drums, before a huge guitar run closes out nearly four minutes of classic prog rock instrumental work that few bands today would even consider attempting...and still fewer could pull off.

The album's title track is a rather strong affair, as well, with those gorgeously layered vocals introducing the track, soon accompanied by a pretty heavy guitar riff, and those killer Hammond fills from Lanzon.  Vocally, this is as good as it gets on the record, and "Living The Dream", the song, is definitely a competitor for best track on Living The Dream, the album.  Heavy in all the right places, but without robbing the band of their 70s prog stylings, this is one smooth, cool rocker that I find myself repeating frequently.  Gilbrook has a pretty sharp drum line on this one, as well, and this song also features the most ripping guitar solo from Box that I have heard in some time.  The guy can still bring it, to be sure!

"Waters Flowin'" will draw listeners to make comparisons to Zeppelin on this stylish rocker, again bolstered by the huge layered vocals supporting Shaw's powerful, emotive lead vocals, complete with more "na na's" than have been put on an album since Journey nearly na-na'd us to death on "Lovin', Touchin' Squeezin'" back in '79!  Then, just as quickly, the band kicks back into another edgy, proggy rocker, with "It's All Been Said", which starts off brazenly, only to back off during the verse section where the lyrics lament commercialism and the modern world, before the band comes crashing back in, again in a very Who-ish manner, and it's off to the races with the Hammond organ and some of the best drum work on the record.

"Goodbye To Innocence" starts off with some killer guitar work, leading the listener to believe it's going to be a big, riffy rocker, before the rhythm section changes everything up and we are treated to a barroom boogie number, complete with a big wink and nudge about meeting the girl that's gonna change your life, son.

The other real treat here, for me, is the penultimate track, "Falling Under Your Spell", which sounds a lot like an updated "Easy Livin'" to these ears, but not so much that the band could be accused of ripping themselves off, simply to fill out a track listing.  This is a great guitar-and-organ rocker, and it reminds me a lot of some of the stuff that the band put out at that same time (think Demons And Wizards or Sweet Freedom...or even 1975's underappreciated, harder-edged, Return To Fantasy, which may be my favorite Heep record).

"Dreams Of Yesteryear" is a fine closer, also, as the big, moody prog rocker is led in by a nice, gritty guitar line, before Shaw waxes a bit nostalgic, telling the listener, "Let me tell you how it was, so many years ago...".  In a way, it seems a bit out of place, really, because nothing else about this record sounds nostalgic so much as it sounds like a classic rock band doing classic rock for a more modern crowd.

Look, I realize these guys have been doing this for a LONG time, but they don't show it, either in their performances or their songwriting, as it would be so easy for a band this long in the tooth to simply put an album on cruise control and coast.  This is a band that still enjoys what they are doing, and as long as Box feels he wants to continue, I don't see Uriah Heep stopping anytime soon.

Granted, I do not own the entire catalog...less than half, actually.  But I would say that this album easily falls into the top third of Uriah Heep's catalog for me, and would be a great starting point for any new fan who may have only experienced the band's classic hits previously.  Long time fans should also seek this one out, as they will surely find themselves hoping at least a couple of tunes from Living The Dream make it into the set list of this still consistently touring band.

Back To Reviews Index
Posted by arttieTHE1manparty at 6:25 PM