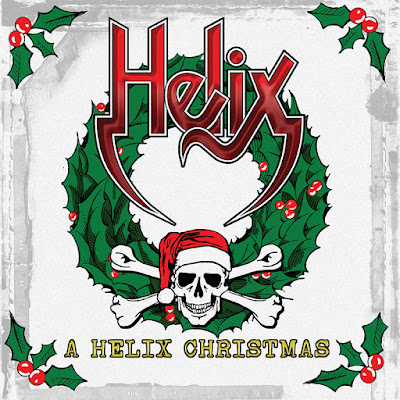 Helix has been around a long time...a LONG time, folks.  Believe it or not, 2018 was the 44th anniversary of the Canadian band, and while many changes have taken place over the years, two things have been consistent:  Brian Vollmer and the Helix brand of heavy metal.  And, when a band has been around and active this long, it is almost inevitable that there will be a Christmas album floating around, right?

In 2008, Helix released their initial Christmas album, A Heavy Metal Christmas, which featured the first ten tracks listed above.  However, for this release, the band added "All I Want For Christmas (Is The Leafs To Win The Cup)", which had previously only been available as a 7" vinyl single, and the newly recorded, Helix version of the modern classic, "Grandma Got Ran Over By A Reindeer".

Most of these songs hold relatively faithful to the original, classic versions...albeit considerably louder and with Vollmer's unique vocal style rather than a children's choir or some suave crooner filling you full of Christmas cheer.  That being said, there are a few tracks here that really stand out for me.

While I have never been a Beatles/John Lennon fan, I have to admit that I have always loved the song "Happy Xmas (War Is Over)" as far as non-traditional tunes go.  Vollmer does a pretty good job of reining himself in, and he utilizes a generally smoother vocal approach than you will find in a typical Helix track.  And guess what; the guy can sing!  He further proves this later on the traditional Christmas classic, "Silent Night", which the band performs with a reverence such a powerful classic truly deserves.  Even when the big power ballad guitar kicks in, there is an emotion to the playing that fits the mood of the track perfectly, as it gives way to the second verse, which echoes the first in approach, as it is just Vollmer and a single, clean electric guitar.  I like it, what can I say.

"Sock It To Me Santa" was originally released by Bob Seger back in 1966, but it is given new life by Helix, who turn the song into a high-octane punk sleaze number, with Vollmer sounding at times a lot like Phil Lewis from LA Guns.  Short (just 2:18), fast, and fun, this is a great little track to throw into the mix, as is the follow-up, the raucous Helix version of "Jingle Bells".  "Christmas Time Is Here Again" nearly matches "Sock It To Me Santa" for intensity and punkish attitude, and it is a fun way to end the album proper before the two bonus tracks kick in.

Of the two new inclusions on this CD, "All I Want For Christmas (Is The Leafs To Win The Cup)" is definitely my favorite.  Combining their love for metal and hockey, these Canadians create a humorous mid-tempo rocker, complete with the catchy "Ho ho ho, Go Leafs, Go!" chant from the band that I am pretty sure the team actually uses around the holidays.  (If they don't, please explain to me why!)  Not likely to be played anywhere other than Canada...and specifically in Toronto...this is still a fun, original twist on a Christmas tune.  By the way, it is NOT performed to the tune of "All I Want For Christmas (Is My Two Front Teeth)", or the uber-cheesy, Mariah Carey "All I Want For Christmas Is You".  This is a pure Helix rocker through and through.

"Grandma Got Ran Over By A Reindeer" starts off with a narrative from Vollmer and the bass player, Daryl Gray, as the set the stage for just how ol' Granny met her demise.  It's humorous...the first couple of times...but it wears thin after too many listens, but hey, it's a Christmas album, so how many times are you going to play it per year, right?  Anyway, the song breaks into a high speed version, complete with double-bass kicks from the drum and some fast and furious rhythm guitar playing, with Gray holding down the vocals for the track, as well.  Again, it's fun, but I'd be lying if I said I haven't grown pretty tired of this song in ANY version over the years.

Again, there's nothing shockingly amazing here, but it is definitely a fun collection to throw in the party mix around the holidays.  The volume levels have been cleaned up so everything sounds smooth and clean here as it transitions from the older songs to the newest ones, and the cover artwork is distinctly different from the 2008 release.  Mine is a digital review copy, so I can't comment on any packaging issues or qualities, but since No Life Till Metal is partnered with Roxx Productions/Roxx Records,  I am sure the packaging is of the highest quality.

By the way, should you find yourself unwrapping some Christmas cash, No Life Til Metal has also reissued the last Helix studio album, the really good Bastard Of The Blues, both on limited edition vinyl and CD.  You can find it HERE.

Rating:  As I always say, rating Christmas albums is difficult, but for the sake of consistency, I'd say you can crank this to 7, because the performances here are very good, and Vollmer sounds great, Christmas songs or not.

Back To Reviews Index
Posted by arttieTHE1manparty at 11:08 AM