BEXLEY "Lost In The Moment" 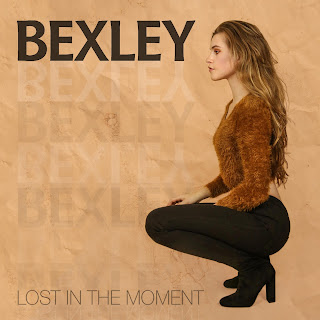 Every now and then, a new artist will just pop up out of nowhere in my mailbox/in-box, that I have pretty much zero interest in reviewing.  The style isn't a fit with me, the artist or band is uninteresting, the production is so bad I can't sit through the record; there are a lot of reasons why I give albums a "thanks, pass...", then delete it or just put it in "the stack".  Its pretty much a guarantee I listen to 95% of everything that is sent to me (if its death or black metal, I don't bother), but as a one man operation, there is simply no way I can review everything fairly and effectively, so I don't try.  But occasionally, an artist will show up that seemingly has nothing for me at first glance, but after I give it that guaranteed first spin, I sit up and go, "Hey...now we're on to something here..."

Bexley is one such artist.  Raised in Seattle, singing "forever", and playing guitar since she got tired of using backing tracks at the age of 13.  Hers is a sound that is definitely a product of her environment, and with influences stretching from Robert Plant to The Beatles to Alice In Chains to Soundgarden, her debut EP, Lost In The Moment doles out some serious angst and emotion, filtered through her melodic vocals and her distorted guitar.

Things open up with "Run Rabbit Run", which finds the young singer/guitarist delving into a decidedly 90s alternative/grunge style, albeit with some poppish overtones, especially in the vocals.  Her voice is almost too sweet, too innocent sounding to fit the music...almost.  In all actuality, the duality of her voice and the accompanying music creates a sonic tapestry that doesn't sound like retro worship as much as it sounds like it comes from someone who was there, living that style and sound and a part of the scene.  All this would potentially be possible were it not for the fact that Bexley is just 22 years old!

"Toxic Love" sheds the pop sensibilities of "Run Rabbit Run" and instead delves into a sludgy, grungy morass that Alice In Chains would call home in the early nineties.  Bexley's still relatively sweet sounding voice on the verse sections is a stark contrast to the Chris Cornell-haunting-the-studio approach of the chorus, where down-tuned guitars and a muddied rhythm section drench the song with a flannel-and-Doc Martens coat of depression and angst, giving the track a unique sound unlike anything on the radio now.

"Falling To Pieces" treads similar waters, a Soundgarden meets 70s psychedelic rock, Hole meets the Beatles, kind of sound.  Still very much a relative of the Seattle sound of the 90s, "Falling To Pieces" features more thick, bottom end grungy rock, but also has some off-tuned guitar riffing and a vocal line that sounds a bit like Lizzy Hale in spots.

"Sometimes" becomes a bit less dank and dark, with a relatively sweet-sounding vocal line, particularly on the chorus section, and Veruca Salt pops into my head as a means of comparison.  The verse sections are relatively noise free,  with a simple guitar line and drum pattern, but the fuzz kicks in on the chorus sections in much the same way Nirvana would hold things back for the majority of a song like "Come As You Are" before unleashing the true fury of the song on the chorus parts.  This is probably my favorite track on the EP and I hope that this is where Bexley finds herself focusing her style on in the future.

"Deal" closes things out, and once again we get a Veruca Salt/Shirley Manson (Garbage) feel to the vocals, some eerily haunting, echoing fingersnaps mixed in with the percussion section, a repetitive, plucky guitar line, and more angst-in-the-chorus song structuring.  A bit repetitive, but still effective, "Deal" provides a solid closing to an overall surprising debut.

Produced by Aaron Edwards, who has also worked with Black Veil Brides and Sick Puppies, Lost In The Moment is thick, dense, and murky...intentionally...with songs that sound like they oozed straight out of the 90s Seattle scene and somehow landed in a more modern, updated recording studio.

Musically, the performances on Lost In The Moment range from competent to excellent, with Bexley's guitar skills definitely belying her tender age.  In fact, her skills on the guitar are of high enough measure that she has been featured in the book Rock Gods, alongside such heavy hitters as Slash and Jimmy Page!  Additionally, she has performed on the Revolver "Hottest Chicks In Rock" tour, is featured in the Spotify "Fierce Femmes" playlist, and has shared the stage with Lacuna Coil, Sick Puppies, and Rob Zombie, among others.  Not a bad way to kick off what appears to be a promising career.

Back To Reviews Index
Posted by arttieTHE1manparty at 4:44 PM