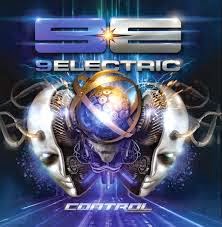 9Electric is an act that I only recently became aware of after seeing them perform as an opening act on Emphatic's latest tour through the midwest.  This effort is actually the bands's second EP and continues the band's Static-X inspired brand of industrial/techno metal.  Normally this is not my style of music at all, but I will admit that a couple of tracks here are extremely catchy and have wormed their way into one of my workout mixes.

One such track is the album's opener, Time Bomb, which just explodes out of your speakers with a bottom-heavy groove and a driving rhythm that immediately sets your head in motion and is likely to get your air-drums some serious action.  As you would expect with this type of music (do they still call it techno or industrial?  I'm seriously not into this stuff, in general...), there are some looped effects going on here, but the actual instrumentation is solid as well, particularly in Lopez's handling of the rhythm guitar and Electric's particularly adept drumming.  Lead vocalist, Thunderwood, employs a fairly clean style of vocals with just a bit of a rough edge mixed into his tenor, shouted delivery style.

The follow-up track is particularly interesting to me as it features some amazing female co-lead vocals from Heidi Shepherd who fronts the Butcher Babies.  The interplay between Thunderwood (should I call him Mr. Wood?) and Shepherd is excellent on "Bullet Tooth", and I found myself wishing she appeared on more than just this one track as I think it would have given additional depth to a couple of the later efforts here.  Again, the music is a pulsing, throbbing electronic mish-mash of effects and some killer guitar work, with strong bottom-end work from both Lopez and bass player, CaseyDC.

Fans of the band are likely to be a bit disappointed as "Feel This" is a previously released track, but to me it was a new track (obviously), and is, again, one of the better moments here.  A solid, dare I say danceable riff and rhythm drive the track with Thunderwood using a bit gruffer vocals in the verses than on the rest of the tracks here, while returning to his higher-ranged tenor on the simplistic-yet-catchy chorus.

Honestly, though, after these first three tracks, I start to lose a bit of interest because the rest of the EP starts to sound the same to these ears.  Again, I will be the first to admit this may be a by-product of my lack of exposure to this genre of hard music, but after a while all the rhythms seem to meld into each other.  "Under Attack" is pretty cool, though, and reminds me of Powerman 5000, which leads me to my next point.

For lack of a better comparison I think of 9Electric being to Static-X what I consider Powerman 5000 to be to White Zombie.  They are similar in style, sound, and approach, but the latter entries (X and Zombie) are the innovators, while the former (9E and Powerman) are the imitators.  In fact, I have been told that one of the final appearances of Wayne Static was on 9Electric's previous EP, and the band's website (www.9electric.com) features a prominent "RIP Wayne Static" across the top of the page, so there is no real question as to where they draw their influence and, apparently, their friendship.

I have no doubt that people who are fans of the previously mentioned bands, or this style in general, will find my description lacking in some way, and that's fine.  I will tell you that these guys put on a GREAT, high energy live show that kept people on their feet throughout, and the guys were all very friendly to interact with, talking to anyone who approached them after their show.  Perhaps that would be the best way to connect with the band before deciding whether or not you want to pick up this new EP, because I can honestly say that without seeing them live first, there is not much of a chance I would have snagged this disc.

Rating:  Short and a bit repetitive, I still encourage you to rock this at a 6.5.

Posted by arttieTHE1manparty at 7:21 PM