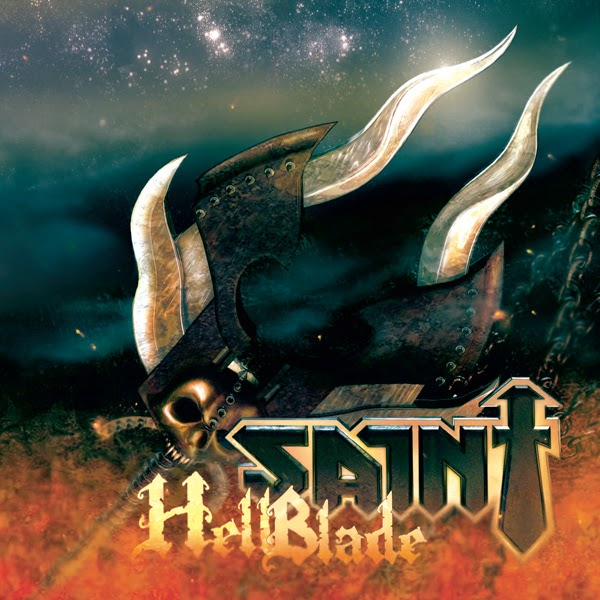 Now THIS is what classic Christian metal is all about!  I know that sounds like the way to end a review and not start one, but it is exactly what I think whenever I put this album in.  Josh's piercing vocals, Jerry's screaming lead guitars, Richard's rumbling bass lines and complementary backing vocals, and Bill's thundering drums really make this, at least for me, one of the best truly metal albums of the last decade.  Don't look for anything "core" on this album, there are no death metal growls or black metal shrieks...and certainly no emo whining...just 100% pure, authentic heavy metal the way that Saint has been doing it since they started playing together, regardless of the line-up that surrounded Richard and Josh.

On Hell Blade, I truly feel that the band has topped the 1980's masterpiecs Time's End and Too Late For Living, which is a huge feat.  And, while In The Battle, The Mark, and Crime Scene Earth (particularly the 2.0 version) were all solid albums, each was missing that little something that would push each into that "classic" category.  Hell Blade has that something, to be sure, although I can't put my finger 100% on what that something is.  To be sure, this album has the best production of the "comeback" albums that started with In The Battle, but I'm not sure that is the complete reason for this disc's greatness.  The full-time return of Josh to the microphone is huge for me (not knocking Richard's capable efforts on Crime Scene Earth), and he brings a vocal intensity, maybe even an urgency, that I think has been missing for a few albums from his still always powerful singing.  Richard's bass playing and songwriting and Jerry's lead playing are at all-time bests here, also, but again, I don't know that any of these things singularly pushes this album to the top of the Saint heap.  Perhaps it is a combination of all these things that makes this such a great album...but none of these things would matter without the songs.

Hell Blade has numerous songs on it that would find their way onto any personal "Best Of Saint" album that I would ever make.  The title track, with Josh's barked choruses and his always-will-be-compared-to-Halford screams, is an instant classic, as is the pounding "SinnerPeace".  For me, the two biggest tracks here are "New World Order", with its very topical subject matter, and "Hell Train", complete with a sinister laugh following Josh's call for "all aboard!" leading right into a rhythmic chugging bass-and-rhythm guitar line, and a POUNDING drum section, that one would expect from a "train" song.  "To The Cross" is another powerful number, especially lyrically, and "The Blade" is another punishing track that finds the band in top form.  To be completely honest, the only track I could do without is the opening instrumental, "(The Ascent)", but this feeds so seamlessly into "The Blade" that I don't even really think of it as a separate track.

As is typical of so many Saint songs and albums, the lyrics frequently touch on prophecy and End-Times material, with "New World Order" being a prime example here.  Various newsreel snippets from different world leaders is incorporated to excellent effect on this track, and I just love how it all works together.  "Hell Blade", likewise, is a another prophetic track lyrically, with Satan, the Antichrist, being the "hell blade" that is referred to in the track.  Always key to me is the fact that all of the lyrics are included here, which just makes this package all the more impressive for me.

If I had one complaint about this album, I guess it would have to be that it is only about 40 minutes long...not even that if you don't count the instrumental intro.  I would love to have had another song or two here, but not if any additional material was of lesser quality that would deter from the album's overall greatness.  OH!  It's also a digipack, which I hate, so I guess there are two things I can complain about.  Rats....

If you pick up only one of the Saint comeback albums, my recommendation would be Hell Blade, although all of the albums from In The Battle on are very good.  I am anxiously awaiting the next Saint album, hoping it is even close to the level that this one is.

Back To Review Index
Posted by arttieTHE1manparty at 8:16 PM