CRASH MIDNIGHT "Lost In The City" 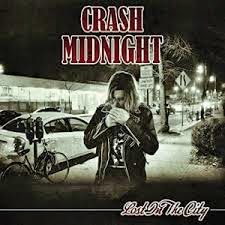 I don't know much, if anything, about the Boston music scene, but if Crash Midnight is any indication of the sounds coming out of that city these days, I have to wonder how long it will be before more people are exploring the area for new bands to check out.  Combining elements of punk, GnR sleaze, and 70's era hard rock with some modern updates, Crash Midnight manages to make retro sound rather cool...while not really sounding like they are trying to be anything but themselves.

The band comes roaring out of the gate with "151", a scorching rocker that oozes attitude, as lead yowler Soho snarls to the listener to "Get back, Jack, I'm a tippin' back, Gonna ride this road til it all goes black..." in this ode to the higher-octane beverages the band likely uses for mouthwash in the morning!  "Made For The Money" keeps the foot on the hard classic rock riff machine's accelerator, with timeless guitar riffing, solid-if-simple drumming, and Soho's brazen vocals.

"Welcome To Boston" is probably my favorite track here and it reminds me a bit of Guns N Roses and "Welcome To The Jungle", to be honest.  The track just drips with sleaze and sass, from the Slash-esque guitar riffs being slung about by Donaldson and Friedman, to the Axl-like screech  and sneer of Soho.  While not likely to explode the music scene for the band the way "Jungle" did for GnR, "Welcome To Boston" is a kick ass rock tune that gives me hope for bands that are willing to just go out there and tear things up, being themselves and rocking out.  Simply put, I love this song...a lot!

"Outta Control" drifts back more toward the 70's end of the band's spectrum, where they sound equally at home, but then the Guns comparisons are likely to come back once "You're The Only One" kicks in.  Again, don't think of this as GnR worship, because that isn't the intention or desire of the band, but there is no doubt these guys were likely cranking Axl, Slash, and Adler while smoking in their parent's basements and garages.

"City Girl" shifts the band into punkish hyper drive as far as speed goes, playing fast and loose with a simplistic rocker, and "Goin' Down The Drain", with it's opening riff that reminds me of "Life In The Fast Lane", is likely the anthem for the band, as it sounds as much like a goal for the band as a warning for these guys.  "Take It" is repetitive and raw, but dang if it isn't catchy as all get-out, and "Long As It's Free" rips and tears its way into your brain with its hook and a slamming guitar work.

Don't think for a second that these guys don't have a softer side, by the way, as they do manage to slow things down for a moment with the barroom blues ballad, "Somewhere Yesterday".  A soulful guitar solo, some well-placed harmonica, and whiskey-soaked vocals perfectly glide across the sawdust-and-tobacco-spit-covered floor of your favorite dive.

Sparsely produced, as it should be, Lost In The City is one of the real sleeper hits of 2014 for this reviewer, and if they come anywhere close to me you can bet I will be in the front row, dodging beer bottles, spit, and stage divers alike.  Honestly, I don't know what there is not to like about this record, as even the packaging is nicely done with complete lyrics and credits, as well as a few shots of the band included.  Nicely done for a small, independent label release.

At times the band reminds me of the early output of The Last Vegas, raw and snotty, retro yet modern hard rock that punched you in the nose when you put it on, but they may be even more attitude-driven than TLV.  If this first album is any indication of where this band is headed, I want to make sure to be there for what happens next, because unless this ride ends up in a smoldering, twisted mess on the side of the road, these guys are possibly on the fast track to the hard rock underground where they may find themselves worshiped as the next coming of the gods of classic sleaze rock!

Rating:  Immensely crankable!  Push this sucker clear up to 9 and prepare for the ride!  Things are gonna get good!

Back To Reviews Index
Posted by arttieTHE1manparty at 10:15 PM