BRIAN "HEAD" WELCH "Save Me From Myself" 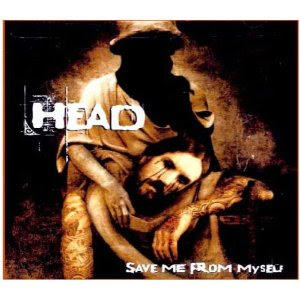 First things first, folks...if you don't like KoRn's style of music, you are not going to like Brian "Head" Welch's album, period.  You can just stop reading now, and please don't waste my time telling me how much this music stinks, becuase I DID warn you.  However, if you are still reading, I encourage you to do so with an open mind, looking(and listening) for the underlying message here, as it is an important reason for why I also didn't dismiss this album out of hand upon first hearing it.

At many points throughout this album, it is, as one should expect, very much in line with the music KoRn was releasing in the mid-1990's and early 2000's.  Welch was a founding member of the influential band, and his guitar playing and songwriting was featured on the band's albums from 1993 to 2005.  However, after feeling his life falling apart, becoming addicted to drugs and alcohol, experiencing suicidal feelings, and following a frightening episode in which he felt he was dying, Welch left the band, cleaned himself up, wrote a couple of books, and released this album.  There is no doubt where the music is headed (no pun intended) from the very beginning of this album, as the nu-metal stylings of KoRn are all over this.  That being said, this is NOT a KoRn clone album, by any means, with the most significant difference actually being much of the guitar playing here.

"L.O.V.E." opens the disc with some slightly dischordant notes that might instantly have KoRn fans nodding their heads in appreciation, only to bring in an almost industrial sounding guitar that will likely throw those same fans for a bit of a loop.  Additionally, especially on the bridge, Welch can be heard singing, something which is NOT a KoRn staple!  It is not until the Johnathan Davis-esque vocal barking on the chorus that the listener might be shaken back to the reality that this is an ablum by the founding guitar player of the nu-metal giants.

"Flush" was the lead single for the album and I have to admit its still a bit silly to hear the sound of Welch "vomiting" into a toilet to start the track, and the flushing toilet sound effect at the end is borderline comical.  The song is an autobiographical one about Welch's days of meth addiction, and the accompanying video is so graphic that it was actually pulled by some video programs and led some Christian bookstores to stop selling the album, at least temporarily.  "Re-Bel" is a song that Welch wrote about children who flee abusive parents and find their way to salvation through Christ.  I do not believe this was an autobiographical song, but rather is about children Welch has known in his life.  As someone who has worked with troubled kids for many years, this song struck a chord with me on a personal level and is one of my favorites here.

"Adonai" is another song which has a definite KoRn feeling to it, especially in the middle section where Welch uses a previously employed musical tactic of taking a nursery rhyme ("Ring Around The Rosie"), altering the lyrics to fit the song, and then building from there.  "Money", a track bout people who worship money or use it as a tool for evil, features some extremely harsh, screaming vocals and haunting guitar tones that KoRn fans will recognize as classic "Head" style.

Other songs are not as easily recognizable as being in the KoRn style, especially not the current sound that band has adopted since Welch left.  "Shake", one of my personal favorites, is rather progressive in the way it is put together, utilizing a guitar style and tone that I can only describe as "jangly" for much of the song before incorporating a more aggressive, harsher tone in the breakdown of the song.  "Home" has very little in the way of a KoRn feel to it, also, and is one of the best tracks here, in my opinion.  This song again employs a more industrial sound to the guitars and doesn't feature any real breakdown which is pretty much a requirement for KoRn, or most nu-metal, songs.

The high point of the album, at least for me, is the nearly 10 minute long album closing epic, "Washed By Blood".  Here Welch uses synthesized string arrangements in a fashion that a lot of Skillet fans will recognize and he also employs a much cleaner vocal style for much of the track, actually singing through the verses of this song then breaking down into more of a whisper about half-way through the track where the music also fades off into a sound reminiscent of a music box.   The song rebuilds itself in aggression from there until we are at full-bore screaming and furious rhythm guitar and drums for about a minute, before the synthesized "voice of God" slows things back down, ushering in the "washed by blood" chorus again and taking things to the song's end.  Once again, this is a huge song with a powerful message of redemption and salvation that I think is Welch's way of wrapping up all of the wounds and frustrations and angers that he has exposed throughout this record.

It should be noted that none of the members of the band would follow Welch to his current project, Love And Death.  While all solid in their performances, this album is about 90% Welch, as he contributes every instrument except bass on this effort.  There is no drummer listed, so one can only assume that the drums are programmed, which would seem to indicate Welch took care of that duty as well.

I had been exposed to a lot of the band's music while working on a college radio station, and I admit to liking the first two albums because they were heavy and different. That being said, I would never have labeled myself as a KoRn fan, by any stretch. I am a fan of Head's, however, which surprised me the first time I heard myself say it or saw myself writing it in a review.  I am not going to sit here and tell you this is my favorite album of all time or that I play it non-stop, because neither is true.  I think of this album as a lot like Sixx A.M.'s Heroin Diaries Soundtrack album, as I think Save Me From Myself really goes hand-in-hand with the book Welch authored about his salvation.  Musically, Save Me From Myself is on-par with the majority of what I have heard from this genre, even expanding upon the nu-metal foundation in places. Lyrically, while simplistic at times, the messages that are delivered here are powerful, autobiographical, and sometimes painful to listen to/read in the lyrics sheet.  It is true that lyrics are obviously not Welch's strong point, but he more than gets his point across and the starkness of the words to these songs adds a sort of power to many of the messages.  This album is a testimony of one man's fall from the top of the music industry to the absolute, near-death bottom, and then pulling himself back up with the help of God and the love of Christ, and no matter how some criticize the writing, that message comes through lound and clear on this album in a brutally honest way that may turn some people off, while drawing others in at the same time.

Rating:  Personally, I would advise people to rock this album to 6.5...but I imagine KoRn fans may be torn on where to place the knob, depending upon their era preference for the band.

Back To Reviews Index
Posted by arttieTHE1manparty at 11:27 AM