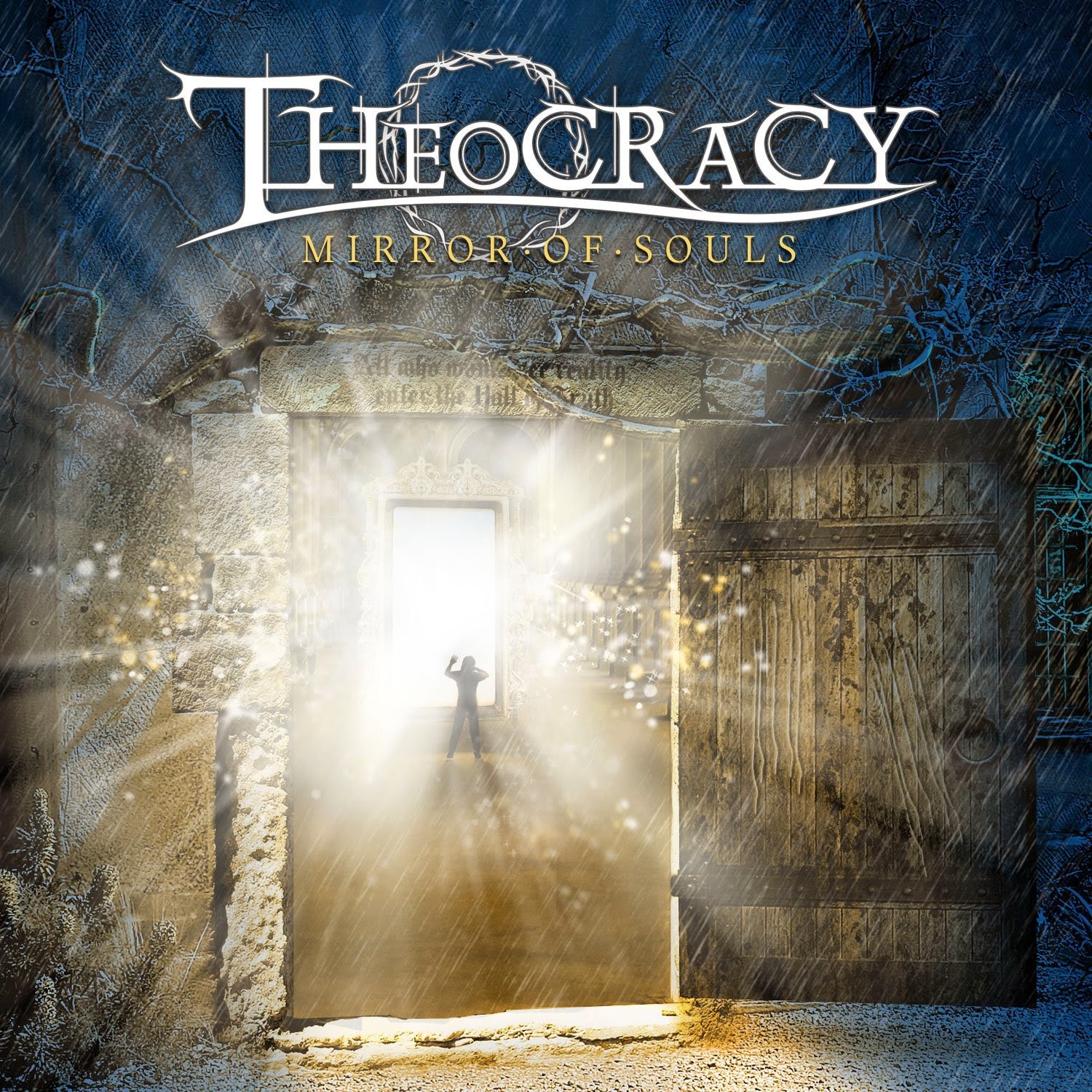 Every once in a while, an album comes around that seems to define a genre.  In my estimation, Theocracy's second album, Mirror Of Souls, is the definition of epic power metal in the Christian metal genre and more than holds its own against its secular counterparts.  As good as the band's self-titled debut album was, Mirror Of Souls surpasses it in every way.  This is a monster of an album that has to be heard in its entirety to truly appreciate its greatness, as snippets of songs simply don't do these majestic mini-epics justice.

One of the major points of change between this album and the debut is that Theocracy is now an actual band and not just Matt Smith doing everything on his own.  The recruiting of Jonathan Hinds and Shawn Benson truly affects the sound on this disc, as Smith was allowed to focus on his strengths which are vocals and his own guitar parts.  Granted, he also played bass and keyboards on this disc, but it really does feel like a "band" project now, which is a very good thing to these ears.

Three words that come immediately to mind when listening to this album are "catchy", "epic", and "melodic".  I say "catchy" because every single song here has a hook of some sort, whether it be a vocal melody or a guitar line or even a lyric that instantly snags the listener's attention and won't let go.  A perfect example is "Laying The Demon To Rest", which happens to have all three of the hooks I mentioned.  I do not feel I am overstating when I say that this may be one of the best Chrsitian metal songs...ever.  The layers of vocals and the melody they are attatched to instantly become embedded in my brain and it takes days to shake it loose!  But even more, at least for me, is the lyrical message of this song about how we all struggle with sin and our own personal demons and our need to call out to God for assistance in these struggles.  At over nine and a half minutes, this song is only the SECOND longest on the album and also calls to mind another one of those words I mentioned above:  "epic".

For fans of those truly epic, seemingly endless power metal journeys, "Mirror Of Souls", the song, is exactly what you are searching for.  Stretching out to more than 22 minutes and somewhat separated into two halves ("movements" might be the more musical term), this is an incredible piece of music that, despite its massive length, does not bore me or tempt me to push the fast forward or skip buttons.  A nice blend of progressive and more traditional power metal, this track has plenty of room to try out various approaches from fast and furious, especially near the front end of the song, to a more melodic approach, including an acoustic section, in the second portion of the song.  It is truly an amazing piece of music to absorb as a whole.

Mixed in that last description was that third word..."melodic".  That is something that is evident throughout the album, but is perhaps most evident in the slower areas of the disc.  As I mentioned, "Laying The Demon To Rest" certainly has melodic passages to it, but that song would never be considered slow or balladesque by any stretch of the imagination.  The following track, "Bethlehem", however, might be the closest thing to a ballad that Theocracy has done up to this point in their career.  "The Writing In The Sand" is another semi-ballad song which, like "Bethlehem", really showcases the melodic side of the band, using smooth transitions and guitar interplay between Smith and Hinds to weave the song rather than the blistering, breakneck pace of songs like "Absolution Day" or the crunching heaviness of "Martyr".

When taken in individual pieces, there are many great individual moments on this disc.  Of the songs I have not previously mentioned,  "A Tower Of Ashes" is a nearly 5 minute long instrumental that really sets the tone for the album, and "On Eagles' Wings" borders on praise and worship-style music in its lyrical approach, especially in the chorus, but make no mistake about the metalic quality of this track.  However, it is the way that this entire album ebbs and flows throughout that creates the true greatness of this piece of music.  Transitioning from lightning speed to acoustic interludes to melodic passages to thundering forcefulness, this album delivers something for everyone who is a fan of epic power metal.  I have seen this album referred to as "orchestral metal" a time or two, and I think I understand what was being said, although I don't think people should be led to believe there is a major incorporation of strings or anything like that, because there is not.  So, rather than attempt to put a genre or style rating on this album I will simply say that I truly believe this is one of the most important pieces of music in Christian metal history...period.  Virtually flawless, it has also been re-released in Digibook format with a bonus track and a 20 page booklet.

Keep up with Theocracy at www.Theocracymusic.com .

Rating:  Crank this to 10 and surround yourself with epic musical greatness!

Back To Review Index
Posted by arttieTHE1manparty at 8:21 PM