CROSSFORCE "Rocking 'Til The Final Day" 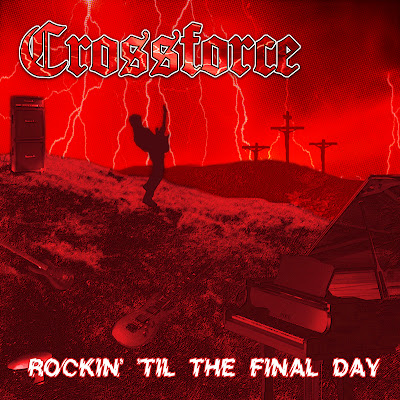 Crossforce is one of those bands that a lot of people say they have heard OF, but few people have actually heard.  While I had heard Tracks 1 through 6 before, albeit in MUCH rougher condition, even at the peak of my demo-tape trading days, I had never heard the Tracks 7 through 13, as these were taken from a very limited edition demo that was done exclusively for Frontline Records in an attempt to secure a record deal.  When put together, these thirteen tracks complete an awesome collection of classic metal with some scorching guitar work, powerful vocals, and surprisingly good production considering the demo status of the combined works here, which is largely the result of some excellent remastering work.

Hailing from San Francisco, California, Crossforce played a brand of metal that, while containing some keyboard elements, was still very much in the classic metal vein and had not morphed into the exploding hair metal sound that was going on not too far away in Hollywood and Los Angeles.  This is not AOR, this is not glam, this is not hard rock...Crossforce is pure metal with NWOBHM influences.

Tracks 1 through 6 have been cleaned up very nicely and sound very crisp and clear despite the passage of 25 years and the demo nature of the recording.  The guitars are exceptionally sharp and flashy here, really showcasing the talent of Castillo.  Nowhere is this more evident than on songs like "Our Father", which has an Ultimate Sin type of Ozzy Osbourne vibe to it, or on "Out Of The Darkness", which fits nicely alongside Barren Cross's older material in terms of style and sound (although there is a keyboard presence on Crossforce's music).  "Ready N Waiting" is probably my favorite of the early tracks here, as it is just crushingly heavy with a killer riff and a memorable chorus that snags in the brain.  Of course, Castillo really shines here, also, ripping off a monster solo at about the 2:30 mark in the song and carrying it out for a good 25 to 30 seconds before fading back into the background.  The title track has a definite NWOBHM feel about the intro, not unlike some of Def Leppard's older, heavier material, but it quickly rips into another metallic rocker with just enough of a keyboard accent to fill in the little gaps.  Good stuff!

Tracks 7 through 13 are a real treat for the listener, as these are taken from a live rehearsal demo that was made for Frontline Records.  You get to actually hear the introduction for each of these songs, which is pretty cool.  Not only are these songs very rare, but they performed very well considering their live nature!  The mixing is excellent and the musicianship is top notch, but there is a bit of roughness left over, giving these songs the live feel that they should have.  Personally, I think "The Call" (not the Deliverance song of the same name), and "It's Your Life" are the strongest of the songs on this particular demo, but all are solid.  "Wait And See" has a bit of a Zeppelin feel to the main guitar riff, but it is not a rip off by any means.  "Weeping World" is the only true ballad to make it onto this set, and it definitely is more keyboard-driven than the rest of the material, yet it is still not drifting into AOR territory.

Lyrically, these guys are unashamed of their Christian stance and pull no punches.  There is no fear of using Christ's name, talking about Heaven and hell, or using Biblical messages.  There is not any Scriptural quotation going on here that I could pull out on my first few spins through the material, but I also do not have a lyrics sheet in front of me.  Excellent faith-based material delivered in a killer metal fashion which shows exactly why this little unsigned band was tapped to open the first Christian Metal Mardi Gras show back in 1987!

Those who are fortunate enough to get in on the limited edition pre-order deal from Roxx Productions will be treated to a second bonus disc, a nice full-color poster, and a guitar pick!  I will have more information about that bonus disc as soon as mine arrives!  If you have not yet ordered your copy, I urge you to do so immediately by going to Roxx Productions.  Don't miss out on this incredible piece of Christian metal history!

Rating: As a collection, I give this set a very solid 7.5 Cranking!

Posted by arttieTHE1manparty at 11:08 AM