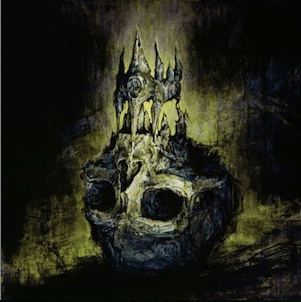 Brutal metalcore are the first two words that come to mind when listening to the latest effort from The Devil Wears Prada.  Not a concept album like the little Zombie EP that they released a little over a year ago, this latest effort, Dead Throne, finds the band crushing their way through the most punishing, and most creative, music they have released to date.  While always being labeled something of a cookie-cutter metalcore band, Dead Throne showcases a band that has expanded upon their sound, more capably intermixing Hranica's gutteral death growls and piercing, almost blackened screams, with DePoyster's clean vocals, all layered over dischordant metallic riffs.  The album still features breakdowns all over the place, as is common in the metalcore scene, but on this disc there are also guitar solos intermixed with those breakdowns to give the songs more depth.  From what I have read, this is largely due to the fact that Rubey essentially took all of the songwriting duties upon himself for this album, resulting in the more brutal, more metal stylings found on Dead Throne.  If that is what it took for this band to finally transcend the Hot Topic Metalcore Band of the Month status that a lot of people had tagged them with...well, I wish Rubey would have stepped up sooner!

With many of the album's songs focusing on themes of anti-idolatry, the lyrical content is definitely something that many fans will be able to relate to, both on a personal and spiritual level.  While still hard to comprehend much of the time, all the lyrics to the songs are included, which is always a bonus.

Personal favorites would be "R.I.T", the thundering "Born To Lose", and the title track.  I also found myself digging the instrumental track "Kansas", although I found the keyboard intro to be a bit long.  Album closer, "Hold Fast", is another very solid track to these ears, with the keyboards adding some interesting atmospheric depth to the otherwise pummeling music and throat-rending vocals.

Perhaps it is because I came into this album with such low expectations that I find myself somewhat taken aback.  Maybe it is simply because the band has matured so much and is that much better than they were in 2005 or 2006.  Regardless, Dead Throne is leaps and bounds better than anything this band has released to date and if they continue to improve by even a fraction of this jump on every album, The Devil Wears Prada may very well find themselves closer to the pinnacle of the Christian metalcore scene...and make themselves a force to be reckoned with in the secular scene as well.

Rating:  Crank this to a crushing 7.5