DESYRE "Warning Of The Night" 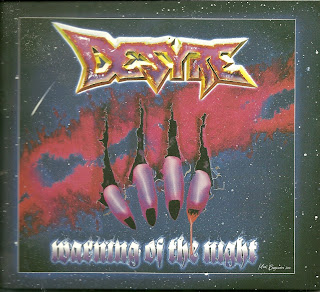 It's not often that I "want to like" a band. By that, I mean that rarely do I get a CD from someone I have talked with, that I enjoyed getting to know, and just hoped and prayed that the CD was good because I really like the person. I was in that situation with Desyre's debut effort, Warning Of The Night, because I had met and chatted with Mazi Bee on-line, and found him to be a very likeable guy, very dedicated to his music and band, not to mention very dedicated to the task of spreading the Gospel through his music. When he told me the band was recording their debut CD, I pre-ordered it, anxious to get it in my hands and give it a few spins. I couldn't wait to like this CD.

Sadly, my desire to like it does not match up with what I actually feel about it.

It is not that the music is bad, because it is not. In fact, the musicianship on the CD is very good for the most part. The guitars, especially, have a great glam/hair metal feel to them, and this band knows exactly the sound they are after, even labelling their sound "Hair Metal Madness" (also the title of their first demo) on the inlay of the digi-pack. The rhythm section is pretty tight, also, although the sound of the drums is a bit "echoey" (is that a word?) and hollow at times, which I attribute to what was likely a very small redording budget. Even the song structure is generally sound and very much a throwback to the 1980's. Lyrically, for those who find these things important, the band is also very up-front about their faith and only occasionally struggle with translation from their native Finnish to English. All of these things are average to above average, or even very good, as in the guitar department.

The vocals are a completely different story.

Part of the problem, again, is the limited recording budget. The vocals alternate between being too out front and almost buried in the mix. For example, on ""Yule Night Brightness", a Christmas metal song, Mazi's vocals are so low on the verses that I honestly can't make out what he is saying without the lyrics sheet. The chorus is fine, but the verses are just a mish-mash of mumbling in Finnish-accented English and very hard to make out. Mazi also falls out of key on several occasions, which I am not 100% sure in unintentional. When he is on, he has a pretty good, if somewhat limited range-wise, voice for this type of material, and pulls some of these songs off very well. Some, however, are rendered almost unlistenable by the clash between Mazi's lead vocals and the also frequently off-key backing vocals. To his credit, Mazi has been very respectful of the criticism he has received about the vocals, and he vows that they will be better on the next album (which is being recorded as I review this effort).

Some of the songs are very strong in their structure, performance, and sound. I think the up-tempo rocker "The Battle" is probably the best song on the disc and Mazi's vocals actually sound incredibly on-key and on-target here. Perhaps the mid-to-lower register most of this song is performed in is where he is more at home. "Burning In The 3rd Degree" is actually a cover song and is another good track with some solid lead guitar work and touches of 80's New Wave-ish keyboards, which is logical since the song is a lesser-known track from the Terminator soundtrack originally performed by Tahnee Cain & the Trianglz (tell me that isn't a New Wave name!). There is a hidden track at the end of "3rd Degree" which is actually a Finnish-language version of "The Undoings Of My Life", which is, in both forms, a fairly decent mid-tempo number that gives Mazi and Coco some time to flash their guitar talent and again finds Mazi singing in a more comfortable middle range and not straining to hit higher notes he struggles with.

The packaging is pretty good for an indy product, with full lyrics, photos, credits, and thank you's. Again, I hate digi-packs, but since there is nothing I can do about it, I will stop my commentary there.  One little added bonus for those of us who pre-ordered the album was this sticker which came with the disc. 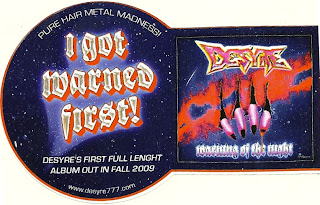 Overall, I think the potential is there and the love for this sound and style of music is definitely present. Also, most importantly, the heart for the band as a ministry is strong, which cannot be understated. There are just some kinks to be worked out. Had this been a self-professed demo, I think it would have been more kindly accepted by most people, as we all know demos quite often sound nothing like the finished product. For this to be a first studio effort can be looked at as either a really bad offering with nowhere for the band to go, or as a starting point for the band to build. I choose to go with the latter.

Rating: Turn this down to 4.5 but keep an eye and ear out, because I truly feel the next effort will be far superior.