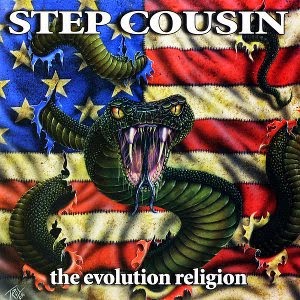 Additional Musicians:
Adam Rhodes--Piano on "In My Darkest Hour"
Jamie Holmes--Flute on "A Friend Like You"
Matt Thompkins--Vocals on "I Don't Need It Now"
Jasmine Mellert--Spoken Word on "Tears On My Pillow"
Kent Hovind--Spoken Word on "The Evolution Religion"

Step Cousin, the...well....I guess step-cousin of Lordchain returned with this, their third album, in 2009.  It had been over seven years since Step Cousin had recorded anything new, and I had to wonder if anything major had changed between 2002's Innocence Before Oblivion and this new effort.  Happily, the answer is no, not much has changed.  Once again, Kelly Matthews and Jeff Grady, both also members of Lordchain, have brought forth a darker, crunchier, thrashier side of their musical selves, combining elements of thrash, death, and progressive metal to come up with a very unique album that fans of bands such as Tourniquet, Mortification, and Grave Forsaken, among others.

Kelly handles the majority of the vocals (the exception being the guest vocalists listed above), and he varies his delivery from a nearly full-on death metal growl to more of a Luke Easter-era Tourniquet approach.  Nowhere are these styles more evident than on a song like "Behind The Veil" which utilizes both vocal approaces in the same song.  This track reeks of Mortification as far as Kelly's drumming approach (and the deathy vocals, as well), but it also mixes in some progressive thrash that would do Tourniquet proud.

The title track, "The Evolution Religion" is even more of a Tourniquet-styled progressive thrasher and is easily my favorite track on this very good album.  This song argues that the government allows evolution to be taught in schools despite the fact that it is very much being pushed as an alternative sort of religion by many people.  The music is essentially progressive thrash for the most part, but there is also a KILLER acoustic interlude with some excellent drum-and-cymbal work by Matthews.  What absolutely makes this song for me is the HILARIOUS vocal drop-ins by Kent Hovind who does a dead-on impersonation of those documentary scientists from the 70's and 80's that narrated so many shool filmstrips that a lot of us were forced to endure as kids. The first narrative explains the song in about 15 seconds, and goes as follows:

"See both creation and evolution are inherently religious.  The difference is the evolution religion is tax-supported (meaning the government funds the teaching of it).  That's the difference."

This is an excellent point that is put over through the use of a bit of humor, which I find myself chuckling and nodding my head at every time I hear this song.  This track alone is worth the purchase of this album....trust me.

The band also utilizes some interesting musical instrument choices, such as the inclusion of a flute solo (no, don't think Jethro Tull here!) on "A Friend Like You".  This is an emotional track lyrically that features a killer groove, some more excellent drumming by Matthews, and some very nice solo work from Gray, along with the flute solo which, much to my surprise, really works well in this setting.

Stand-out cuts for me would be the title track, "In My Darkest Hour", "Cold", another thrasher with a humorous Time-And-Temp vocal intro, "Tears On My Pillow", and slightly more melodic "Scarred".  "Obituary" is solid, as well.  I'm not as fond of "Life And Dreams" or "This Is The Time", but neither is a bad song.  I kind of get the feeling that tinkering with the track listing might have helped these songs a bit, but I'm not a sound engineer, so who am I to say, right?

Step Cousin is a really cool project that I wish would get a bit more notice from the metal community, Christian or secular, as I think this two-man band shows a lot of talent in not only their instrumental approach but in the songwriting as well.  It is clear the band has taken their influences, mixed in a touch of their own Lordchain background, and poured our some great groove-oriented progressive thrash.  The production is very good, especially when it is remembered that this is an independent release, and the packaging, while simple, does include full lyrics to each song as well as cover art done by Troy Dunmire who has also done work for Mortification in the past.  Very cool stuff....  Now, I just hope they don't wait another seven years before the next Step Cousin record.

Back To Reviews Index
Posted by arttieTHE1manparty at 8:08 PM