SAINT "Broad Is The Gate" 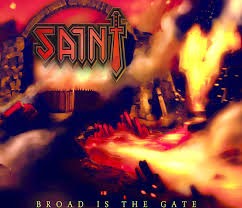 If there has been one Christian band that has been the real torch-bearer for traditional heavy metal, it is unquestionably Saint.  Long compared to the legendary Judas Priest for their stylistic approach (as well as the powerful sonic wailing of long-time frontman, Josh Kramer), Saint seemingly never wavers from their approach to bringing their message of salvation...and warnings of damnation...to the metal masses.

But for the first time in seemingly forever, things are slightly different for these Oregon metalheads, and while not horrible, there is no arguing that the difference is noticeable.  That difference, if you check the listing above, is the absence of the previously mentioned Kramer on lead vocals, and a new man behind the mic in Brian Phyll Miller.

It should be noted that Kramer had been absent before, with Lynch handling the vocal duties in a largely successful manner, primarily (and most recently) on the original pressing of Crime Scene Earth.  On that version, Lynch tackled 6 of the 9 songs, with Kramer handling three.  Later, the band re-recorded the album with Kramer on all of the lead screams, resulting in Crime Scene Earth 2.0.  Additionally, this is not Miller's first go-round with the band, as he shared lead vocals with Kramer on the band's last album, Desperate Night, fronting one of the albums songs to Kramer's eight (Lynch fronted two, himself).   However, with Miller being added as THE full-time vocalist now this is the version of Saint that will be going forward for the foreseeable future.
Musically, the band's sound remains much the same, employing that Priest-esque NWOBHM sound that they have long since mastered and made their own.  The guitar tandem of Johnson and newcomer Smith is excellent and the few fans who continue to grumble about the absence of long-time Saint guitar slinger, Dee Harrington, likely haven't given the latest couple of records a true listen, as Johnson has shown himself to be a more than capable shredder.  Smith allows the band to utilize that true twin-guitar sound that adds so much power and life to this style of music.  I think it would be a definite treat to hear this tandem in a live setting as I have a feeling the pair would play off of each other in a remarkable way, as they sound extremely tight here.

Likewise, the strong rhythm section of band founder Lynch and drummer Knowland keeps the band ever-pounding forward, driving each of these metallic numbers with a throbbing pulse of energy.  This can be heard from the moment the cymbals start crashing and the bass starts throbbing on the opening track, "Broad Is The Gate".

That leads us to the vocals.  Naturally, there are going to be comparisons and contrasts between Miller and Kramer.  Miller sings in a slightly higher register than Kramer on his clean, singing parts, with a bit more grit to his voice.  Kramer has the superior scream and seems to vocally command the songs a bit more, which could also be a by-product of so many years of perfecting his craft.  Both are vocally powerful and project well, with Miller really showcasing his abilities on my favorite track of the album, "We Will Fight".  In the spirit of fairness, I prefer Kramer's vocals, but, also in the spirit of fairness, his are the vocals of my youth, as I have been with this band since the 1980's, and Kramer has pretty much always been there.  Miller is a capable replacement and, as I stated about the guitar tandem, I would relish the opportunity to hear Miller live to witness firsthand how he handles the classics in the Saint catalog.  I'm guessing his performance would be excellent.  But as far as the album goes, is it obvious there is a different singer?  No question, especially to long time fans.  Is it odd to hear?  Sure, at first.  But does it ruin the record?  The easy answer is no.

The songs themselves are traditional Saint NWOBHM.  The previously mentioned "We Will Fight", "Broad Is The Gate", "We All Stand", and "Hero" are all songs that are likely to find themselves in the band's setlists, nestled in alongside catalog classics and more recent headbangers.  These four are definitely the cream of the crop on this record, along with the criminally short "Reach The Sky".   This is a monster of a song with guitar work here that is truly OFF THE CHARTS, incredibly fast and very sharply performed.  I really wish this track had been given more time to expand the solo, possibly even adding in a second extended solo break where the song currently ends, before coming back into the chorus, and then soloing out.  I LOVE what was done here, I just wish it had been longer.

A couple of other tracks leaving me wanting.  "Demon Pill" is incredibly short and comes off as almost unfinished at just 2:35, and the closing instrumental piece, "Metal Cross" feels like a last minute add-on to fill time.  To be fair, I judge all instrumentals that a band does by the best they have ever released, and I think Saint will be hard-pressed to ever touch the amazing greatness of "Returning" from the classic Too Late For Living album, so "Metal Cross" is probably doomed from the start...at least for me.  Personally, I would have loved for 50 seconds of this 1:45 track to have been given to "Reach The Sky" and "Demon Pill" respectively, allowing each to reach their full potential.
The one song I haven't mentioned yet is "Never Same".  This song is a head scratcher for me.  This is the first time I can recall the band experimenting with more orchestral moments (I could be forgetting something from the band's massive back catalog).  Knowland is credited with the "orchestrations" on this track, so I am understanding this to mean he added in the keyboard accents and the symphonic elements to this track which has something of a Euro-power metal feel to it in places.  It also reminds me of something the Scorpions might try to do, especially in the way Miller handles the vocals here.  I like the song quite a bit, actually, but it doesn't really fit with the rest of the album.

To my ears, the mix sounds a bit raw in places...almost garage-ish...especially the cymbals and the snare.  The guitars are crisp and out front, as they should be, and the vocals are recorded equally as well.  I'm not sure if there was a problem with the way the kit was mic'd or if this was an intentional approach to give the effort more of a raw, live sound, but personally, I would have liked to have heard them cleaned up a bit.  None of the songs are ruined, and I have gotten used to the sound with the numerous listens I have given to the album, so perhaps this is more of a personal nit-pick than a real issue with the recording.

The packaging is above average, especially for an independent release.  Yes, it is a cardboard tri-fold slipcase, but all of the lyrics are included, as is a picture of the band, some brief recording and writing credits, and basic website information.

All in all, a satisfying effort from one of the few remaining bands, Christian or secular, who remain true to their musical roots and continue to press on in the classic heavy metal style.  Miller is a capable vocalist and the addition of Smith once again gives the band a fuller, classic metal sound.  While not a threat to the classic tandem of Time's End and Too Late For Living, or the pinnacle of the band's catalog, Hell Blade, this new album is professionally recorded, solidly performed, and features real teeth behind its metallic bite.

Saint marches on, and in fine fashion, with Broad Is The Gate.

Rating:  Crank this to a 7.5, with three short songs likely holding this back from being an 8 or greater.

Back To Reviews Index
Posted by arttieTHE1manparty at 1:16 PM