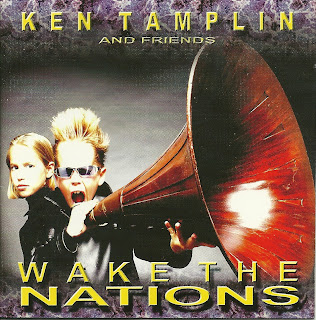 Wow...when Ken Tamplin goes an extended period of time between solo efforts, he apparently does a LOT of writing...and then records it all!  These are 18 full songs, none of which clocks in at under 3:12, so that's a lot of music to digest all in one CD.  And, as you might expect, there is a fair amount of lesser material, but when the music here is on, IT IS ON!

There are no weak songs for the first seven tracks, as things start off with a bang on the very first song, the powerful "The Story Of Love" which features powerhouse vocal contributions from Jeff Scott Soto and Philip Bardowell.  This song is easily the best on the disc, in my opinion, and combines not only these great singers but a killer message about how Jesus shows/showed His love for man despite our brutal treatment of Him.  Powerful stuff that I am surprised didn't get more support from Christian rock radio.  Incidentally, the video for this song is included on the bonus DVD that is included in the 2-disc version of this album.

From here, the album continues on with the smoking "We've Jihad Enough" which, as the title implies, is about the violence and disaster of the "holy wars" being waged by terrorists across the world in the name of religion.  "Falling Houses" features a very catchy chorus and a nice guitar hook that carries the song.  "Man With A Plan" is another great song whcih features an excellent guitar solo from Jeff Waters.  Although I will be the first to admit I don't like the electronic drum sound on this track, it is not a horrible distraction and I can live with it.  "Hare Kristians" is a bit more poppy in its song structure and heavy keyboard use, but it is still an above average track.  The title track, "Wake The Nations" is one of my favorites here,  as it is a more straight-ahead rocker with dueling solos courtesy of Mr. Tamplin and Scott Van Zen which are among the guitar highlights on the disc.  In fact, Van Zen and Tamplin both outshine their bigger name peers for the vast majority of this album, which is really saying something and speaks to the considerable axe skill of both.

"God In Heaven" is a blues-influenced track that slows things down a bit from the previous six songs, but really showcases Tamplin's considerable vocal skills and, again, features some excellent guitar work from Van Zen.  Fans of Rez's blusier style should find a lot to love in this song!

"Peace On Earth" is the first song that has me at least reaching for the skip button, even though I don't always hit it.  It's a solid song but doesn't fit the style of most of the album and is a bit too commercial and adult comtemporary sounding for me.  Fear not, however, as things pick back up immediately, as "Mystery" might be the heaviest song on the album, starting off with a crunchy guitar riff and thundering drums before another catchy chorus and nice solo escort you the rest of the way through the track.

From this point the rest of the disc is pretty hit or miss for me.  "7 Eleven People" is a weird commentary on everyday people in everyday situations, but I don't grasp where Ken is trying to take the listener. However, the Friedman/Beach solo tradeoff is excellent and salvages an odd song.  "Cell Phone Freaks" has a KILLER solo by Richie Kotzen, but the song itself is kind of lame lyrically, at least for me, and is saved only by the solo.  Other songs are not so lucky, however.  "Saints And Heroes" is just kind of there as a song, not really doing a lot musically until the solo from Mattias Eklundh.  Still others, such as "Sing", "Waiting For Your Love", and "Every Day Is Precious" really come across as songs that were used as filler material, which I don't think was necessary on an 18 track disc.

The album closes on a solid note, with worthy rocker "Freedom" bringing up the rear.  This song, as much or more than any other here, really reminds me of the Shout days of Tamplin, and is one of the top half dozen songs here.  It's a nice way to close a generally solid album that I think really could have been trimmed by 4 or 5 songs, giving the listener an excellent hard rocking disc full of some very powerful Christian-themed messages, insightful social commentary, and political observation.  As it stands, this is definitely a massive undertaking with a couple of clunkers that keeps this from being the powerhouse album I think it could have been.

The bonus DVD contains the videos for "The Story Of Love" and "Falling Houses" as well as song "backstage" material.  The videos are not overly spectacular in their appearance, but they are nice little add-ons.  I honestly have not watched the "backstage" material, as things like this hold little interest for me.

Rating:  The best material outweighs the weakest stuff JUST enough to allow you to crank this album at 7, but minus a few lesser tracks, this may have been an 8 or 8.5!  Seek this out...

Posted by arttieTHE1manparty at 11:15 AM