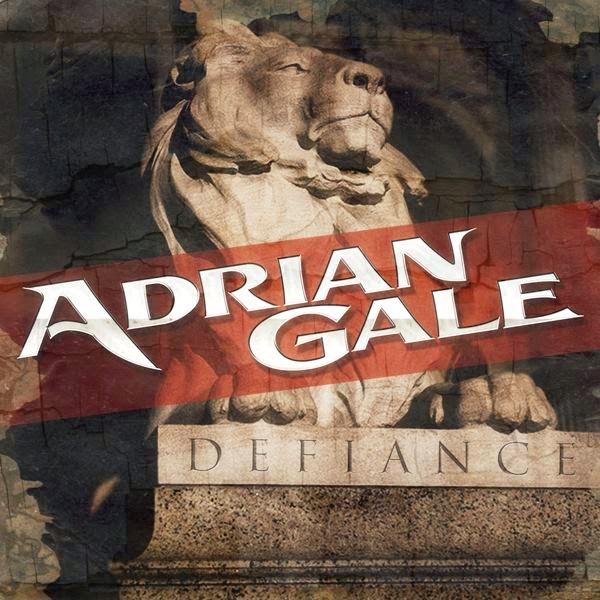 Since their resurrection a couple of years ago, Adriangale has been on a tear, releasing two new studio albums in the space of about 18 months.  Sucker Punch! was a great comeback record for the guys and many people, myself included, were rather surprised at how quickly this latest effort followed.  Would it be a case of too much too soon?

Jamie Rowe and Vic Rivera, the main men behind the "band", return with what may be their best performance yet with Defiance, a new set of ten near perfect melodic rock tracks.  Searing guitars, edgy yet melodic vocals, positive lyrics, and meatier production than the band has ever used give this latest album the musical punch necessary to really drive the record.  Jamie Rowe sounds as strong and fresh as ever vocally, reminding me of his younger days when his previous band, Guardian, was at the top of their game with Fire & Love and Miracle Mile.  There really is no mistaking the tenor rasp that characterizes the majority of Rowe's vocals, and there is plenty of that to go around here.  Take, for instance, the album opener and title track, "Defiance".  Crunchier and moodier than many of their previous efforts, this song is one that too much vocal polish or shine would have ruined, but Rowe steps to the plate and smacks a home run, charging through the verses before the amazingly melodic backing vocals chime in on the hooky chorus of this hard rocking number.  "Yours Forever" and "Back To You" are equally hard rocking numbers that, once again, remind me a lot of the edgier Guardian material, and "Sometimes" may be the heaviest hitter on the record with a nice ripping guitar solo from the oft-overlooked third member of the band, Eddie Campbell.  To be honest, I wish Campbell would be given more time to shine on this record (or ANY record), as the guy can flat out shred and really brings a classic 80's style to the fretboard that mixes in so well on the harder material here.  Good, good stuff, to be sure.

The guys don't let their melodic side suffer for the added punch given to the guitars here, as "What About Love" hearkens back to previous efforts from Crunch and Sucker Punch!  Crisp layered backing vocals and some excellent, clean, technical guitar riffing from Rivera are a melodic rocker's dream here, and Rowe's vocals somehow manage to capture a smoother quality without changing their overall sound.  "Warning Signs" is another melodic rocking gem that pulls from their catalog of experience, and the quasi-80's ballad, "Last Of My Heart" is the Zippo-inducing track of the lot with it's electric piano, a scorching guitar solo, and big time harmonies.

The album closer is an interesting choice as, for those not aware, "Speed" is actually a cover of a lesser-known Billy Idol song from the soundtrack for the movie...you guessed it....Speed.  If you don't recognize it, that's okay as the song didn't even chart in the United States back in 1994 when it originally was release.  Fast forward 20 years and with a little update in production and some minor tweaks, Idol and his ever-present axe-master, Steve Stevens are morphed into Jamie Rowe and Vic Rivera.  While no one will mistake them as clones, the new version packs a wallop and is a great way to wrap things up on this newest Adriangale effort.

The production, as I have touched on, is not as slick and smooth as on previous Adriangale (or a lot of Kivel) releases, and it serves the band well.  Whereas a band like Tango Down really benefited from the polish of the production on their last effort, Adriangale is just as well-served with some of the rough edges left intact here.  The additional grit Rivera gives the record more character to my ears, and the extra heft swings the album right into my wheelhouse as far as styles I enjoy listening to.  It is worth noting that once again, Ty Sims of Bombay Black worked behind the scenes, adding his immense talent to the mastering process of this top quality production.

As is typical of every Kivel Records release I have received, Defiance is very well packaged, complete with a full booklet, all lyrics and writing credits, thank you's, and several photos.  I wish other labels would take note here because for those who believe the ONLY thing that matters is the music...well, let me say this...there's a reason I don't download much music, and the complete package is the main reason why!  It's nice to hold additional artwork and lyrics in your hands as you listen along to a new album by just about anyone.

While many people knock Adriangale as being a project more than a band, I have to ask, "who cares?!"  Great music is great music, and Adriangale knows something about making exactly that.  Unlike a lot of bands, studio band or not, Adriangale seemingly manages to continually up the ante for themselves and so many others in the melodic rock genre.  They know what their fans want and they deliver time after time.  As good as Sucker Punch! was, Defiance is just a smidgen better with beefier guitars and grittier production.

Rating:  Crank this one all the way to 9.5!  An excellent piece of musical art through and through!

Posted by arttieTHE1manparty at 9:32 PM