JAG "Fire In The Temple" 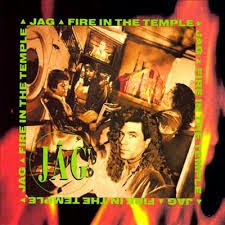 No one will ever mistake JAG for a metal band, but they were certainly a good hard rock/AOR band in the late 1980's and early 1990's.  A friend of mine sent me Fire In The Temple, which was the band's last album (that I am aware of), telling me that I would "love it!" and compared it to some of the melodic hard rock bands he knew I liked, such as Foreigner, Journey, Boston, etc.  Ummmm....not so much, at least for the majority of the album.  While there are some decent AOR tracks, the album never really reaches "hard rock" territory, at least for very long, and it kind of blends into the background after a few listens.  The often-used comparison to Whiteheart became even more solid on this album as no fewer than four former or current members of that band performed on this album.  In fact, there are so many guest musicians on this album, I am not really sure who plays on what, or what the actual members of JAG even did!

The album starts off promisingly enough with one of the harder rocking numbers in "Stand By Love" which features Garies' smooth but powerful vocal delivery and a nice, if understated, guitar solo.  However, by track two, "Invisible Man", the harder-edged guitars are gone and the band incorporates keyboard programming that, while somewhat reminiscent of some of the moodier stuff bands like Foreigner were doing around this time, continues with a more electronic feel than most of the hard rock bands of the time, Christian or secular.  It is an interesting song, but not one of my favorites by any means.  "Streams In The Desert" is pure CCM to my ears and, again, is not a bad song, but this album is starting to become pretty slow and ballad-oriented by this point.  That trend continues with the next track which is one of the more interesting song choices here, at least for me.

"Long Lost Friend" is a song performed by contemporary country artists Restless Heart on their 1989 album Fast Moving Train.  The song was co-written by Restless Heart lead vocalist Larry Stewart, who also supplies guest vocals on the track.  There is a fairly substantial difference in the tracks, although both keep the song in ballad territory.  The use of some keyboard programming on the JAG version adds a bit more of a pop feel to the track, but I doubt fans of Restless Heart would be offended by this version, and vice versa, which I am not 100% sure is a good thing for most people.  Truth be told, however, I actually prefer Restless Heart's version (hey!  I spent a decade in 80s/early 90s country radio...sue me!).

JAG finally returns to at least mid-tempo rock territory with the next track, "I Keep Coming Back" which features a simplistic, yet catchy chorus and a very pop-rock style that could have easily charted alongside Foreigner or Boston at the time.  The title track, "Fire In The Temple", is an up-tempo number that starts off with an nice acoustic guitar intro before picking up with a bit more rock flair than some of the other tracks here.  Once again, a strong chorus is one of the key elements here, and this is one of the best tracks on the disc.  "Mine, Mine, Mine" rocks harder than anything else on the disc and bears at least a passing resemblance to Kenny Loggins' Top Gun hit "Danger Zone", at least in the guitar riff before the verses kick in.  If the entire album had been made up of songs like this one and the album opener, I would be able to say that I was pretty interested.  Sadly, that is not the case.

"Land Of The Living" ironically barely keeps my pulse going, and "1000 Words" is so pop I have to skip it when I hear it.  Album closer, "A Circle Unbroken" is not wholly different than Elton John's "Circle Of Life" in tempo and delivery, and I can honestly say I am thankful the album has come to a close.

I have the first two JAG albums and, while neither one blows my speakers, both are significantly harder, at least in spots, and generally more consistent than this disc.  Perhaps it is best that JAG laid the band to rest with this effort, as it really is nothing to get to overly excited about.  Fans of the more laid back style that Whiteheart used at times would likely love this record, and maybe even fans of bands like Mr. Mister.   A couple of songs would worm their way onto a "best of JAG" compilation if I were to make one, but the vast majority of this album is just too slow, too pop, and frankly, too boring for me to get into.  The album title had me hoping for more, and even the cover looked a bit more hard rock than the music delivered.  Needless to say, my previously mentioned friend who suggested I would "love" this album was flat wrong.

Rating:  Turn this down to 4 and look for their first album if you really want to hear JAG at their best.

Back To Reviews Index
Posted by arttieTHE1manparty at 8:34 PM