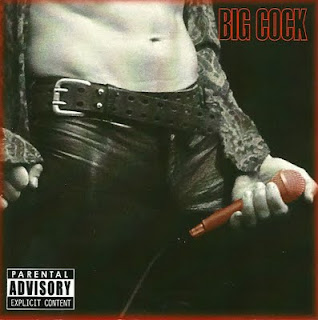 Before he went on to front the newest version of Warrant, and after his brief gig with Lynch Mob, Robert Mason was prowling the stage with the microphone for this band.  Not a shy band by any means, Big Cock...ahem...hangs it out there for everyone to see exactly what they are about, from their unabashed album cover to several song titles which leave no doubt about the sleaze factor of this band.

On this, their second album in just over a year, the band returns to the gutter to dredge up even more sleaze and sludge for fans of their straight-ahead style of hard rock.  There are a lot of songs to sort through here, and all of them clock in at almost exactly three minutes, so despite the large number of tracks, the disc moves along at a good clip.  The fact that the vast majority of this album blasts forward at full speed helps things keep moving as well.

Aside from the rather juvenile lyrics and lockerroom titles, the band is surprisingly adept at delivering some fairly decent hard rock tunes at times.  Stand outs would be "Fu**ed Up!", "Real Man", and the surprisingly good "Booze & My Baby", which Mason declares is "for the ladies".  Not sure about that, but it is a good song with a catchy rhythm and a nice solo courtesy of Henzerling.  "Take Me" is another good, bare-bones rocker that has a bit of a 70's AC/DC vibe.

The band does manage to throw the listener a couple of curve balls on this album.  One oddity here is the cover of of Paul Anka's "She's A Lady", which I think the band pulls off exceptionally well.  The albm closer, "Let's Make Love", sounds like it could have been taken from Tesla's Five Man Acoustical Jam album stylistically, and it works very well.  In fact, I wouldn't mind hearing the band tackle a couple more acoustic tracks such as this one, as opposed to the ridiculous ballad "Every Inch Of Me", which sounds like the band ripped off a Mr. Big or Extreme ballad and then tried to figure out how to make it as nasty as possible.   "Scottsdale Girls" has a very 60's sounding vibe to it, and again, the band figures out a way to make it work musically, even if the lyrics are, once again, less than mentally stimulating.

Big Cock is one of the few bands I have ever encountered who could compete with Steel Panther for juvenile, sexually-charged, perverse lyrics.  That isn't really a compliment, however, as Steel Panther at least acknowledges the fact that they are something of a joke band...and Steel Panther is more talented as musicians.  With multiple albums under their belt (there is at least one more after this), Big Cock appears to be in this for the long haul, depending upon what happens with Mason and his Warrant gig (the lead singer history of that band seems to indicate Mason won't last long...).  If you can get past the lyrics, or if soft-core audio porn is what you are after, Big Cock is probably right up your alley.  As for me, while I am definitely a sleaze fan and not a prude by any stretch, the banality of the lyrics just becomes tedious to endure and I find myself shelving this disc rather quickly.

Rating:  Turn this down to 4.5, but give the Anka cover a shot and see what you think.

Return To Reviews Index
Posted by arttieTHE1manparty at 6:39 PM