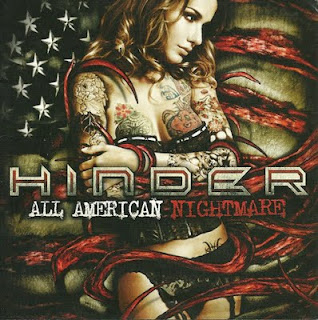 (c)2010 Universal Republic Records
Austin Winkler--Lead Vocals
Joe "Blower" Garvey--Guiter, Vocals
Mark King--Guitar, Piano, Vocals
Mike Rodden--Bass, Vocals
Cody Hanson--Drums
All American Nightmare is the third major release from this group from Oklahoma City, and fourth release overall if you count they abysmal post-grunge effort, Far From Close.  This newest effort is, by far, the heaviest material the band has put forth yet, although it does still contain a few commercially appealing songs to keep the folks at radio happy.
From note one, my ears were loving what they were hearing when I first popped this disc in!  Kicking things off is the blistering "2 Sides Of Me", which lets the listener know IMMEDIATELY that this is not going to be an album full of "Lips Of An Angel" styled songs.  Screaming guitars and Winkler's equally screaming vocals rip through a powerful song with an insanely catchy chorus!  Not slowing down at all, or even taking a breather for that matter, the title track and lead single "All American Nightmare" rips what was left of the listener's eardrums out with even more crunch-and-screech from the guitar tandem of Garvey and King.  Two-for-two as far as I am concerned, and this album is only 20% done.
The band does back off a bit on the next track, "What Ya Gonna Do", a rock ballad infused with a bit of a country-styled sentiment with a chorus of "What ya gonna do when the whiskey ain't workin' no more, life don't feel like before...what ya gonna do...".  I have heard some people complain about this song, and the similarly-styled "Red Tail Lights", but I think both songs work very well and showcase a band that is capable of multiple styles.  "What Ya Gonna Do" also came off VERY well live and the crowd was very much in the palm of Winkler's hands for this track.
"Hey Ho", the band's anti-rap song, is the closest thing to a throw-away track on the album, and I did not like it much at all on first listen.  It has grown on me a bit, however, and I don't skip it when it comes on; it just kind of blends into the background.
"The Life" is the first time the band ventures into true ballad territory and I will be shocked if it doesn't end up as a single at some point.  Very radio friendly, but not overly poppy or anything...just a good ballad with a rocked-up chorus that Winkler's voice really expresses itself on.  "Everybody's Wrong" is the disc's other ballad, but it is not quite as strong as "The Life", in my opinion, but it is still a quality track.

Two of the next three tracks come out blazing again, with "Waking Up The Devil" and "Striptease" both being full-speed heavy-hitters.  "Striptease" is a particularly angry song in which Hinder takes a swipe at all the radio pop divas out there now, although no one particular bimbo is singled out (I have heard Britney Spears and Paris Hilton are kind of a two-headed monster that the song is directed at...).

"Put That Record On" is the regular album closer and is another song that came off very well in a live setting.  Similar in feel to Nickelback's "This Afternoon" in style and "Photograph" in sentiment, only referring to music as the cause for reflection upon one's past.  A good song that, again, has radio written all over it.

For those who have the expanded version of this album, "Good Life" is another up-tempo rocker with swagger, which I would have liked to have seen make the regular edition.  "Bad Mutha Fu**a" is an odd song that is completely out of place on this disc and the only song that routinely gets the skip treatment from me.  The final two cuts are demo versions of standard-edition tracks that don't offer much in the way of differences from their full-production versions.

This is exactly what I hoped for from Hinder, especially following the excellent Take It To The Limit.  This is Hinder taking chunks of the best of the old Sunset Strip scene and mixing in the crunch and anger of the modern hard rock scene, blending them to perfection.  This is an excellent record that deserves far better treatment saleswise than it has gotten in its first year of release.  Hopefully the couple of radio singles here, along with the band's high-octane live show, will spark further sales because this is one of the best modern hard rock records to come out, period.

Rating:  Crank this sucker to 9!

Back To Reviews Index
Posted by arttieTHE1manparty at 2:32 PM