WANTED "Too Hot To Handle" 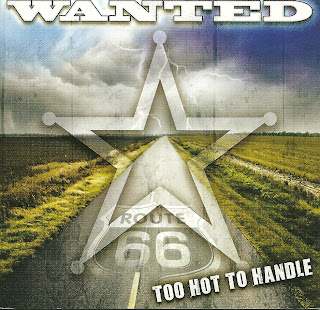 Someday, I might start a "Should Have Been Stars" hall of fame...okay, probably not.   But if I DID, Wanted would be in there.  These guys had that Sunset Strip-look, a sound that screamed Skid Row (listen to the "Oh yeah...!" that opens the song "Whiskey & Women" and you will SWEAR it was lifted straight from "Youth Gone Wild"...), an excellent live sound, a manager with a band that had already been signed to a major label deal (Sweet F.A.), and a chance to record at least two singles with Geffen Records (Whitesnake, Aerosmith, etc.).  Yet for everything that seemed to be going their way, the planets simply did not align and Wanted faded into obscurity.

As far as the studio tracks go, the previously mentioned "Whiskey & Women" and the boogie-woogie styled title track, "Too Hot To Handle" are some kick-ass hard rock tunes that seriously contend with anything put out at the time.  "Mr. Right" is another excellent up-tempo rocker, and "Lost In Me Forever" is serious lighter-in-the-air ballad material.  In fact, "Lost In Me Forever" is one of the two tracks recoreded for Geffen which really has me scratching my head, trying to figure out what went wrong, because this had radio hit written all over it.  For that matter, the other Geffen track, "Be Still My Heart", while not quite as solid as "Mr. Right" or the title track, is a very good uptempo number which reminds me stylistically of a lot of what Slaughter or even Motley Crue was doing at the time.  In fact, the only studio tracks on this set that I have any real complaints about would be "Another Day" and "Blue Jean Baby".  My issue with "Another Day" is simply that it BLATANTLY rips off Aerosmith's "Walk This Way" riff and then speeds it up to almost punkish speeds, which just rubs me the wrong way despite the fact that the song really isn't all that bad.  "Blue Jean Baby", despite rocking along very well musically, just seems somewhat childish in its lyrical content.  Again, not terrible, and better than a lot of the fluff and filler you find on major label releases.

For me, it's the live content here that really shows what this band was capable of.  Heck, the band's intro for their shows is cool enough to be included here!  I would have loved to hear studio versions of most of these songs, with "Anchors Aweigh", "Sidewalk Seducer", and "Rhythm & Rhyme" really grabbing my attention, along with another Slaughter-esque track in "See It Through".

Again, I have no idea what went wrong for these guys, as there is NOTHING here that I can point to as being the reason this band didn't succeed.  Sisk is, at least vocally, a very competent front man, and the guitar tandem of Saylors and Wilson display a lot of style and flair without sounding like wankfest guitar-god wannabes by running the fretboads and hitting the whammy bar for every solo.  The rhythm section also proves worthy, especially evident on the live set, where Lee and Cole lock into these songs and keep things pumping along.

As is typical of the great stuff that Eonian puts out, the band's brief biography is included in the liner notes, but all that is mentioned is that "the relationship between the label and the band's management went south, soured, and eventually dissolved, killing any chance that Wanted would be signed to the label".  Maybe it was money, maybe it was song-ownership rights...who knows.  Thankfully, Eonian tracked this stuff down and put it out there for us to hear, because this is high quality, hard rockin' hair metal that ranks with the best of the unsigned bands that I have come across so far.

Rating:  Crank this to 8, even on the live material.

Return To Reviews Index
Posted by arttieTHE1manparty at 7:18 PM