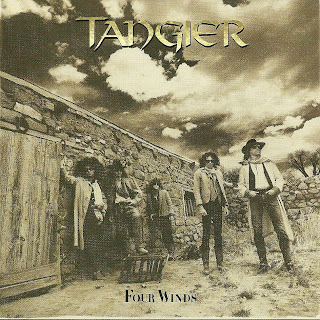 In the 80's and early 90's there were a lot of bands that had a lot of talent but just never seemed to catch that big break.  Tangier proves that it wasn't just unsigned independent bands that had this issue, as these guys had a major label deal and STILL didn't make the big time.  But, as I stated at the outset, it was not for a lack of talent.

Four Winds is actually the band's second album, but first on a big label (their self-titled album on Wolfe Records is quite a collectors item).  This is a truly great album featuring several very melodic hard rock songs with catchy hooks and choruses that should have spelled rock radio success.  Album opener, "Ripcord" is a prime example of such a song.  This uptempo hard rocker has a tasty solo in it, a chorus that, while simple, wriggles its way into your brain and sticks there, and solid tenor vocals that hint at David Coverdale or David Reece (Bangalore Choir, Quiet Riot) at times.  Follow-up song, "Mississippi" is drenched in blues and soul, as you might expect from the song title, and is a great piece of music.  "On The Line" is another excellent mid-tempo, blusier-edged southern rocker that isn't far removed from what the second incarnation of Bad Company (Holy Water, Dangerous Age, etc.) was doing at the time.  While this track was given the video treatment, it still didn't do what it should have, which had to be frustrating.  "Southbound Train" also had a video made for it, and deservedly so, as this is one great song that sounds like a beefed up version of .38 Special, but with better vocals and guitar.  "Four Winds", the song, is another great hard southern rock tune that just REEKS of Molly Hatchet or maybe the Outlaws, but again with better vocals.   It's when the band is in this vein that they are at their strongest, and they seem to know it, as "Fever For Gold" and "Sweet Surrender" continue in this hard-rockin' southern style, with the first track being more mid-tempo in style while the latter is pure southern boogie-woogie rock n roll.  The final two tracks, while not bad, are not as solid in my opinion, with the backing vocals on "Good Lovin'" being a particular annoyance for me.

It is probably not coincidence that bands such as Tangier, Tora Tora, Tattoo Rodeo, Sweet FA, and others that tried for this bluesy, hard southern rock sound all failed to really blast their way to the tops of the charts.  Maybe it is also not coincidence that bands like Whitesnake and, to some degree, Deep Purple and Bad Company, modified their sounds as they aged, heading toward more of a pop production and hair metal sound and managed to remain relevant.  I do wonder if Tangier and their ilk would have enjoyed the same success if they had come along in the late 1970's instead of the late 1980's, and also had the chance to modify their sound like Whitesnake did.

At the same time, it makes me wonder how Tesla managed to break so big....

If you see Four Winds, snag it.  You are not going to be disappointed....

Rating:  Crank this to 7 while looking for their other stuff as well.

Back To Reviews Index
Posted by arttieTHE1manparty at 3:54 PM