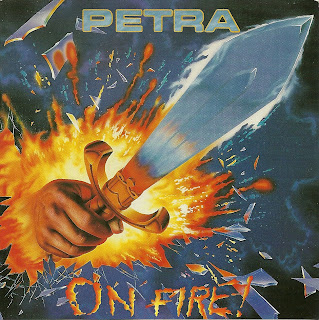 
For those who may be unaware, Petra is, hands down, the biggest Christian rock act of all time, selling well over ten million albums, rivalling the total sold by Stryper.  By the early 1980's Petra had modified their sound to become more of a straight-forward rock band along the lines of Foreigner or Boston.  But with this, the band's third album with John Schlitt as lead vocalist (and the third album produced by the Elefante brothers), Petra released an album that was full-on hard rock, even bordering on metal on a couple of tracks and their popularity was never higher as the band earned their first Dove Award (think Christian Grammy) and were nominated for their fifth Grammy.
The first three tracks on this album leave no doubt that while the band was largely the same (with the exception of new bass player Ronny Cates), this Petra had an all new attitude and was out to "rock the hell" out of their listeners!  "Fired Up", "Hit You Where You Live", and especially the metallic "Mine Field" are all smoking rockers that really show the strength and power of Schlitt's vocals, the soloing skill of Hartman on guitar, and the thunderous sound that the Elefantes coaxed out of Weaver on drums.  As has always been the case with Petra, there is a fairly liberal dose of keyboards in the mix, but they are not a detraction from the sound on this album and actually provide a balancing point for the fans who may be more enamored by the AOR leanings of some of Petra's older material.  "Mine Field" actually reached number one on the Christian rock charts, as did the album's first ballad, "First Love".
Personally, I have never been a fan of Petra's ballads, and this album is no different.  Yes, the songs are put together well and performed with great skill, but they are simply too keyboard-driven for me, never reaching the level of "power ballad" status, and, as such, falling pretty flat on my ears.  This is not only true of "First Love" but also "Somebody's Gonna Praise His Name" and "Homeless Few", which are, ironically, among the most popular ballads the band has ever released.
When the band is rocking on this disc, however, they do no wrong for me.  "Defector" is another excellent hard-rocker, and "Counsel Of The Holy", a song about the Bible, is a great, great mid-tempo hard rock song which again pushes the boundaries of metal and showcases some of the strongest vocals Schlitt had delivered up to this point (along with "Mine Field").  "Stand In The Gap", while not as hard-hitting as some other tracks, is still a very good rocker which is not out of place on the record.
Unlike Stryper, who has always had strong crossover appeal to non-Christian audiences, Petra has never really caught on with the secular music buying public, and that is a shame.  In my opinion, the period from 1986 (Back To The Streets) to 1991 (Unseen Power) features some of the strongest material from any of the Christian bands and rivals the material put out by Petra's secular counterparts.  On Fire! may be the best of the bunch, especially if you are looking for the hardest, dare I say "heaviest" material the band had ever released (at least until the Jeckyll And Hyde album in 2003), and it is an album I feel all hard rock fans, Christian or not, would be wise to check out.
Rating:  Despite my lack of love for the ballads, this album is still crank-worthy...juice it to 7.5!
Back To Reviews Index
Posted by arttieTHE1manparty at 7:59 PM