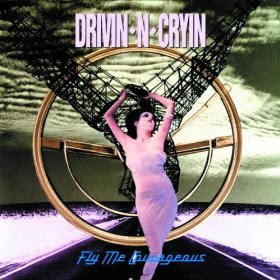 Drivin' N Cryin' is a hard band to categorize, at least in my opinion.  On the one hand you have a lead singer who sounds somewhat similar to Jane's Addiction's Perry Farrel or a young Tom Petty, a band that plays hard Southern rock in the vein of the Black Crowes, and a guitar player who channels a lot of the Sunset Strip scene in his solos.  So how do you classify them?  Perhaps classifying this band is part of the problem; perhaps they should just be taken for what they are.

There is no denying the obvious when listening to this album...it rocks.  It is not the heaviest album you will ever encounter, by any stretch of the imagination.  It is, however, chock full of hooks, memorable-if-simple choruses, and some great song structures.  The problem, if you want to call it that, is that it is impossible to get past the title track when talking about Fly Me Courageous the album.  The song is just insanely catchy and rhythmic, the vocals are passionately delivered, and there is a smoking guitar solo in the mix that just has all the elements that hard rock/hair metal fans love.  Additionally, the song became an unintentional hit, as it was released during the start of the Persian Gulf War and it was reported that pilots from the U.S. Navy and Air Force were listening to the song before takeoff.  That's powerful stuff, intended or not, and the song took off from there, charting in the top 20 of both Billboard's Modern Rock and Mainstream Rock charts.

Outside of that popular song, the album does feature two other Top 20 Mainstream Rock singles in "Build A Fire" and "The Innocent".  "Build A Fire" has definite southern rock roots and sounds like a logical musical follow-up to the popular title track.  Drummer Sullivan, who was in a pre-record deal version of the Black Crowes, locks into a groove with Nielsen and the pair carry this bouncing rock number, with another nice, if understated, guitar solo layering nicely over the backbeat.  "The Innocent", is another up-tempo rocker, although it starts out with a pretty mellow acoustic intro.

The rest of the album is somewhat hit-or-miss for me, and it is easy to see why those three songs were the choices for singles.  That is not to say there are no other good songs here, just that none are as commercially accessible or radio friendly.  "Rush Hour" is the fastest song here, a driving rock number that carries a frantic pace for a couple of minutes before apparently hitting a traffic jam and then slowing down into a plodding rhythm for the guitar solo, before cranking back up again.  A very interesting song structure here that I love and this is one of my favorite songs on the disc.  "Let's Go Dancing" is a straight-forward, mid-tempo acoustic number with the exception of the bass guitar, with a very sparse arrangement and simple structure.  "Lost In The Shuffle" is another high-energy rocker and "Together" is solid rock number that has a kind of Mellencamp feel to it, and is, again, one of the better tracks here.

Not all works to perfection for me.  Album opener,  "Around The Block Again" just has too much of a Petty feel for me, as I am not a huge fan of Tom and his Heartbreakers, although I can certainly appreciate their musical ability.  "Chain Reaction" sounds to me like it was taken straight from a Black Crowes album and just isn't overly original to my ears.  The only real ballad on this album, "For You", kind of falls flat for me, lacking any real emotion or musical punch.  I understand that Drivin' N Cryin' isn't trying to create a huge, lighter-in-the-air power ballad here, but that doesn't mean there can't be SOME power.  This reminds me of a Soul Assylum type of song where the music is almost as whiny as the lyrics.  It simply doesn't work for me.

As my attempted description probably indicates, Drivin' N Cryin' is a very hard band to pigeonhole, especially on this record, which most people consider to be the band's hardest rocking album.  The massively popular title track gets airplay on hard rock stations and even on Sirus/XM Satelite Radio's "Hair Nation" channel.  Other songs find themselves played on alternative radio, which I think is fitting in a fringe way.  I am not a huge fan of the band in general, and I only own one other album by the band, but I do like this record pretty well and I love the title track, which I played the crap out of back in my college radio days.  It's odd that with this being their most commercially successful album it is also one of the hardest to find in used CD stores, possibly because no one wants to let go of it.

Back To Reviews Index
Posted by arttieTHE1manparty at 10:08 AM