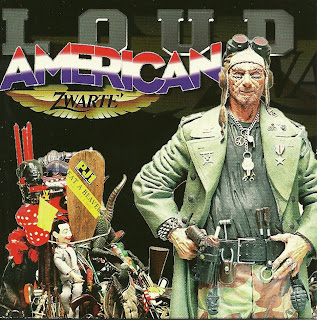 (c)2001 Minor Major Music
Randall Zwart--Lead Vocals, Guitar
Bob Zwart--Percussion, Vocals
Baron Duncan--Bass, Vocals
Edmund Filarecki--Lead Guitar
Unless you are from the Midewest United States, there is a very good chance you have never heard of Zwarte.  Since I am from that region, Zwarte is a band that I have met, watched, hung out with, and listened to for the better part of the past twenty years...and they are still going strong, albeit with a few personnelle changes over the years.  Seemingly always just missing out on that "big break", the band finally reached at least a moderate level of fame by writing and recording the song "Sturgis" which is now used as the "official anthem" of the massive motorcycle rally of the same name.
Loud American is the band's fifth CD, released in 2001, and features the song "Be On My Way", which was featured in the movie, "Rustin'", which stars Meat Loaf. (Never seen it?  Me, either...).  Aside from that massive hit (pun intended), this album fails to offer up what pretty much every other Zwarte album offers...mostly mid-tempo classic hard rock with flashes of Eddie's guitar talent, Randall's laid-back vocals, and some humorous, if often snide, ovservations and commentary on mid-American life.  Instead, Loud American is anything but loud and seems confused as to what it is trying to be.
Album opener "Scream" sounds like the band's attempt to go a bit in a modern direction with their sound and, frankly, I don't like it all that well.  I don't know if the band was attempting to make a statement with that song or if they were trying to attract different listeners, but this is the only song on the album that strays from the Zwarte sound and, as such, is an odd choice for the opening song.
After getting past "Scream", the CD gets to the heart of the Zwarte sound.  "Wanna Dance" sounds like it could fit on practically any Zwarte release in their catalog, as does the title cut, "Loud American".  "Gimme Shelter" is a Rolling Stones cover that gets the Zwarte treatment, with the band slowing the tempo just a bit and Randall's hung-over vocals working pretty well here.  Purists will probably throw a tantrum upon hearing it, but as with the covers they do in concert, Zwarte shows that they are not above taking a classic and making it their own, whether you like it or not.
By this point in the album, Zwarte finds themselves shifting into more of a blues mode.  The throw-away"Butt Crack Blues" is a mildly humorous song found in the "Jukebox Version" on this album.  Trust me, it's not something you are going to play over and over, whether on CD or a jukebox, but it is worth a chuckle.  "Moonshine" keeps the bluesy shuffle going, and "Pay The Money" stays the course with Baron taking a shot at lead vocals.  "I Kissed Her Lips" again treads the slower-tempo blues territory, with this being the strongest of the set thus far.
"Uncle Pervy" is another throw-away, as far as these ears are concerned, then the album closes with two of the strongest songs of the disc, the mid-tempo rocker "Kickin' Cryin", and the afore-mentioned "Be On My Way", which is a very laid back, acoustic based number that again snuggles up close to a blues-styled song with a nice acoustic guitar solo in the middle.
Overall, this is a fairly unbalanced album and nowhere near the best that Zwarte has to offer.  There are a couple of tracks here that are worth giving a semi-frequent spin to, but the disc in general lacks the punch that the band displays live and never really rocks out, with the exception of the modern-rock attempt of "Scream".  As such, Edmund never gets to flash his guitar talent, Bob spends most of his time in "keep a steady tempo" mode on drums, and Baron's bass is relatively tame throughout.  Zwarte is not a bad band at all...but this is not the album to pick up if you want to find them at their best.
Rating:  Turn this one down to 4 but don't turn the band off.  There is much better stuff out there...

Return To Reviews Index
Posted by arttieTHE1manparty at 1:50 PM