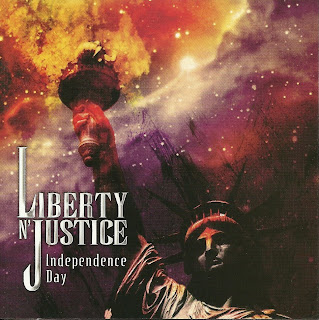 (c) 2007 LNJ Records
Liberty N' Justice is:
Justin Murr--Bass
...and a lot of famous rockstars!
What LnJ started in 2004 with Welcome To The Revolution, and continued in 2006 with Soundtrack of a Soul, was continued in 2007 with Independence Day. On this effort, Liberty N Justice changes things up just a bit, putting forth a more laid-back sound with this largely acoustic rock album. However, unlike some other band's acoustic projects,  Independence Day is not a career retrospective done in a slightly different fashion simply to sell a couple of extra albums (Bon Jovi, anyone?), or regurgitated and sadly watered-down hits done without electricity (such as the VH1 “Stripped“ set of discs).  Independence Day is an album full of new songs for this group of musicians, and is done to show another side of the project.

Rockers, rest easy. This is not an acoustic album in the fully unplugged, almost folky or country sense. There are still lead guitar solos, they just aren’t chock full of distortion; there are still a few effects thrown into the mix, but there is not layer upon layer of keyboards or processed backing vocals. Rather, what you have here is raw, stripped, gritty hard rock, drenched in soul and the blues, and tinged with a southern rock approach in places. And much like its predecessor, Soundtrack of a Soul, Independence Day is an album does have its minor hiccups, but which proves itself an excellent example of not only the vision of group leader Murr, but also of the true talents on display by those involved.

As has become the LnJ trademark, Independence Day is bursting at the seams with big name talent, not only vocally, but behind the scenes as well. Recording/engineering star Mike Layne returns, also adding his touches on guitar, bass, drums, keyboards, and backing vocals. Mark and Shannon Hovland (Hovland) do much the same, contributing in virtually every musical area possible. Jack Frost (Savatage/Seven Witches) and Nikki Damage (Line Of Fire), along with several others, lend their talents on guitar, and EZ Gomer (Jet Circus) also jumps in on bass. Even the list of engineers on this project is impressive, with such notables as Keri Kelli (Warrant/LA Guns/Pretty Boy Floyd), Don Webster (Neon Cross), and Kelly Keagey (Night Ranger) all contributing.

For me, the highlight of the disc is tough to declare. Certainly up for consideration has to be Jack Russell on “Monkey Dance”. As a huge Great White fan, I have practically been begging Justin to get Jack on a Liberty N Justice disc, and he obliged in a big way. However, my love for this song is not merely sentimental; Jack’s smoky, blues-heavy voice lends itself especially well to a setting such as this. The infectious chorus wedges its way into your brain and seats itself there for the long haul (just ask my wife!), and Jack really gives the listener a sense that he knows something about the subject matter here (addiction and sin controlling your life). This is a track that I could easily hear Jack throw into the Great White mix and no fan would feel like something was out of whack.

“Snake Eat Snake” featuring David Raymond Reeves of Neon Cross is another standout. Again, befitting the tone of the record, David slides into a lower, grittier register here, sounding closer in tone to the songs on the “Torn” release than anything on the band’s debut. The song has a hard southern rock feel to it...almost an acoustic Charlie Daniels Band type of feel (his southern stuff, not country). David more than proves himself vocally capable here and shows that even if he is not the most well-known of the vocalists here, he is not out of his league at all.

Yet another stand-out cut to these ears is “Soldier” featuring Kelly Keagey of Night Ranger and Mark Slaughter of...well...Slaughter. The pair sound like they have been singing together for years, and Slaughter sounds especially strong here. Again, much like with Reeves, don’t expect to hear Slaughter ripping his vocal cords to shreds with piercing highs, but do anticipate a much more laid back, controlled delivery that I think suits his maturing voice very well. A strong chorus along with a throwback to childhood innocence lyrical feel make this track one of my favorites.

The “other” Kelly might surprise a lot of people here. Kelly Keeling of Baton Rouge sounds nothing like the vocalist he was as the leader of that hair metal band. On this remake of the classic Whiteheart tune, Keeling has a much more laid back sound and approach, letting more huskiness creep into his delivery and adding a more soulful feel that he did on much of Baton Rouge’s material. Given the daunting task of supporting the album's title track, Keeling delivers an excellent performance here.

Jamie Rowe, who is a mainstay of the LnJ projects, finds himself sounding very much at home here. Anyone who has heard Rowe’s performance on the “Swing, Swang, Swung” acoustic offering from his old band Guardian knows that Jamie can wrap his unique voice around a solid song and make it his own. He does exactly that here on the superb “Fade”. Sporting one of the strongest hooks and catchiest choruses on the disc (along with “Soldier” and “Monkey Dance”) this track really brings everything together and ties it all up for me. If I was forced to give just a single track to a potential buyer to highlight what this project is about, Rowe’s “Fade” would likely be that track.

“My Sacrifice” was a pleasant surprise for me as well, for much the same reasons as mentioned with Reeves and Slaughter. I am so used to hearing Shawn Pelata (Line Of Fire/K-Octave) really elevate his voice in both pitch and force of delivery that to hear him back off a bit and sing in a lower register with a much more somber delivery was a special treat. I‘m not sure if Shawn picked the track himself, or if it was assigned to him, but it was definitely a great choice and one that showcased an under-appreciated talent.

Two former Warrant frontmen contribute tracks here, as Jani Lane and  Jamie St. James (also of Black N Blue fame) do credible jobs with their chosen material.  Lane might pull off the performance award on this disc, not simply because of quality of the vocals themselves, but more with the sincerity with which he delivers the lyrics to “Addiction”. The listener really gets the feel that Lane is putting himself into this song, perhaps almost therapeutically. Always stronger on Warrant’s more soulful, bluesier material than the anthemic rockers, Lane sounds very much at home here.  St. James, meanwhile, does a stellar job with the romp-n-stomp “Bullet, Train, Breakdown”. In fact, I think St. James sounds stronger here than he ever has with Warrant, and better than he has sounded since the “In Heat” days of Black N Blue (obviously the Hell, Yeah! record is included here, also). He appears to have a full grasp on how he thinks this song should be delivered and he attacks it, especially in the gritty chorus. Perhaps this style is one St. James might consider fully exploring were to ever venture out solo once again.
Tony Mills, formerly of  Shy/Shy England and now with TNT, handles his chosen song expertly as well.  I didn't like this song a lot originally, but time has really treated this song well for me and now I like it a lot.  Not sure what changed...maybe my attitude...but the more I got to listening to this song, the stronger it became.
One track I simply can not seem to get past, however, is “Remember Me” by EZ Gomer of Jet Circus. With its quirky intro and strange, almost spacey vibe, I am not sure what to think about the structure of this song or about how Gomer’s voice works in this setting. The song just sticks out like a sore thumb to me, and is really the only thing that keeps me from just putting this disc on random/repeat in my CD player and then letting it go endlessly. In all honesty, after the first half-dozen listens or so, I have found the skip button a necessity here.

Other contributions include John Corabi (ex-Motley Crue/The Scream/Union/Ratt) on “Doubting Thomas“, Pete Loran of Trixter on “Phoenix“ and the husband and wife duo Hovland adding closing track “A Little Bit Of Love”. While none of these three is a bad performance, they all have more of a “filler track” feel to me. This was especially surprising to me with Corabi’s contribution as it is the lead track of the disc. I know the man can sing, but I never felt he really let loose here, which was disappointing for me. "Phoenix" didn't feel like it fit the rest of the project, as it really doesn't have a lot of the acoustic feel the rest of the tracks do; otherwise, I actually liked the song quite a bit. I just don't think it was representative of the project as a whole. All are certainly worthy of listening to, but none would find their way onto “The Best Of Liberty N Justice”, at least for me.

Overall, I find myself enjoying this CD a lot, even after literally hundreds of listens now. Its not often that a project such as this becomes a long-term player for me, as rarely is a normally “electric” artist able to convince me that they fit and feel comfortable in an acoustic setting. The vast majority of the singers here do not have that problem, however, and some almost seem more at home with this style than they do their current surroundings.
Rating:  Crank this to 8!
Back To Reviews Index
Posted by arttieTHE1manparty at 4:05 PM