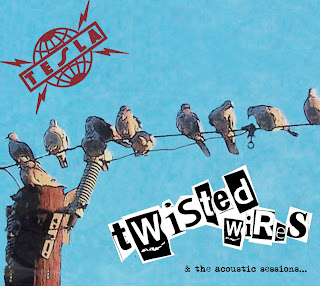 Perhaps it is fitting that Tesla chose to use their second unplugged album as a final chapter and reboot all at the same time.  Ater all, it was Tesla that essentially sparked the unplugged craze with their Five Man Acoustical Jam album, so what better way to say goodbye to one of the band's original members, as the second half of the album is the swan song for guitarist Tommy Skeoch.  Likewise, this album gives fans a chance to hear new guitar slinger Dave Rude in the acoustic setting that the band is at least semi-famous for.

To me, what makes this album a great listen is the fact that the band didn't simply rehash all of their biggest songs in an acoustic fashion.  There is no "Modern Day Cowboy", no "Love Song", "Gettin' Better" or even "Signs".  Instead, what we are treated to are versions of some of the lesser known songs in the band's catalog, including recently recorded songs like "Into The Now", which worked surprisingly well as an acoustic track.  "Shine Away" and "A Lot To Lose" are excellent songs for this type of recording and both really show the strength of Keith's unique voice which does not sound at all road-weary or strained, unlike a lot of the 80's singers who are still recording.  Of course the ballads like "Song & Emotion" work well in the acoustic format, but the same can be said of songs like "Edison's Medicine" and "Hang Tough", both of which are some of the harder rocking songs in Tesla's catalog.

There are two new Tesla songs here, as well as a new cover tune.  All three are strong songs, with the cover of the Climax Blues Band's "I Love You" fitting nicely into the set.  Of the two new originals, I would have to say that I think "2nd Street" is the strongest of the two, although I like both.  I would like to hear "plugged in" versions of both of these songs, by the way, so Tesla members...take that as a hint.

The high point for me, outside of the amazingly well-executed "Edison's Medicine" is the acoustic rendering of one of Tesla's most powerful songs ever: "Changes".  I have loved that song since the first time I heard it on Mechanical Resonance, and that love has not changed or been altered by this new version.  Keith takes his voice down just a slight bit in register, but it does not take away from this great song, and it is a great inclusion on what I feel is a very good set.

I don't know that Tesla will win any new fans with this Twisted Wires..., nor do I know that they indended to.  I do think, however, that long-standing fans of the band will find a lot to love on this recording and will enjoy hearing fresh takes on some of their favorite tracks as well as a handful of the band's more obscure songs.  The production is crisp and clean, which I will admit I was a bit concerned about with the shift to the Italian Scarlet Records label which is more known for their heavier metal acts like Primevil, Eldritch, and Necrodeath.  No need to be concerned it turns out, as Tesla sounds exactly as they should here...they sound like Tesla!

Rating:  Crank this at 8 and enjoy a bit of the past, present, and what the future has to offer!

Back To Reviews Index
Posted by arttieTHE1manparty at 12:07 PM