THEORY OF A DEADMAN "The Truth Is..." 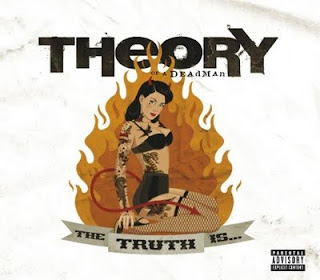 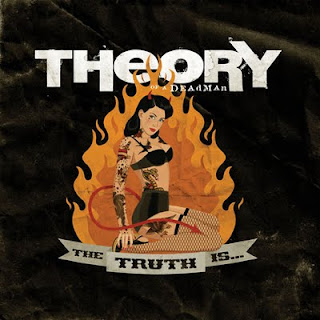 David Brenner--Rhythm Guitar
Dean Back--Bass
Joey Dandeneau--Drums
It's been over a bit over 3 years since Theory Of A Deadman really broke through with their massive hit album Scars & Souvenirs, featuring the huge radio songs "Little Smirk", "Hate My Life", "Not Meant To Be", "All Or Nothing" and the mega-smash, "Bad Girlfriend".  During that time, the band stayed busy, still touring in support of that album which had been repackaged with several bonus tracks and some cover songs.  However, a lot of people started to wonder when new material was going to be made available.  Wait no longer...
Theory Of A Deadman's fourth studio album, The Truth Is..., picks up pretty much where Scars... left off, with several several attitude-packed rockers, a couple of emotionally-charged ballads, and one or two complete misses, much the same as Scars...  The band doesn't do anything to reinvent themselves here, nor do I think they needed to.  Either you are a fan of the sleazy Canadian rockers or you are not.  If you fall into the fan category, you are likely going to really like this new record (which I do), and if you didn't like them to begin with, don't waste your time or money.
The band kicks things off with this album's rocking first single, "Lowlife", which sounds like it could have been pulled off of the Scars... album.  This is a fun track that is perfect for summer listening.  "Bitch Came Back" is sung to the exact tune that is likely going through your head right now ("Cat Came Back"), and, quite frankly, gets as annoying as the original fairly quickly, although it is, once again, a fun track...at least for a while; I imagine I will get very irritated with it being stuck in my head after a while.  "Hurricane" is easily one of my favorites, and is more of a mid-tempo rocker with some synthesized (I'm assuming) strings in the mix.  Pretty cool song.

I'm not a real fan of "Out Of My Head", largely because of the "I-ee, I-ee, I-ee, I" way he Tyler drags out the word "I" on this ballad...just annoying to me!  Once that song is out of the way/skipped, it is back to more of the good stuff, as "Gentlemen", "Love Is Hell", and the title track are all back in the more familiar vein of what fans now expect from Theory Of A Deadman.  "Gentlemen" and "The Truth Is..." are both uptempo rockers while "Love Is Hell" is a down-tempo, angry, swear-fest, as I think just about every curse word that can't be used on radio is included in this song in some way.

About 2/3 of the way through the disc, things get a bit iffy for the rest of the main disc.  Track 8, "Head Above Water" is a decent song, a mid-tempo number about not quitting, but nothing overly spectacular.  "Drag Me To Hell", on the other hand, may be the best song on the album, a high-energy, anger-fueled track that just flat out rocks!  I can imagine this is going to be a big hit in concerts and on satelite radio.  "What Was I Thinking" kind of drags things back down a bit and is not an overly memorable song with a decent chorus but no real hook to it.  "Easy To Love You" keeps the down-tempo trend going, and although it is a bit better than the previous song, it is still missing the real gutsy, gritty feel of a T.O.A.D. ballad such as Scars' "Not Meant To Be".  Standard album closer, "We Were Men" does nothing to pull the album out of the tempo slump that it is now mired in, although the material on this song is interesting (soldiers returning from war), and there is a GREAT guitar solo at about the 2:40 mark.  Very good stuff, if not up-tempo, and I am not disappointed with this being the standard album version closer; at least it ended with a powerful song.

On the expanded edition of this album, there are several bonus tracks, a couple of which I think are some of the strongest material in the collection.  "Careless" is a great rocker and I can't figure out why it wasn't included on the regular disc.  "Villain" is EXACTLY what a lot of fans are going to feel like they are missing on the main disc, as it is a sassy, snarky rocker with a great bass line and lot of attitude that could be compared to "Little Smirk" as far as the attitude it presents, and goes hand-in-hand with the album opener, "Lowlife".  I'm guessing that the band relegated this to bonus material status because it is another "language problem" song that is not likely to get any airplay outside of satelite radio.  "Does It Really Matter" may be the best ballad in the entire collection and I think it WILL become a satelite radio hit, which may be a good thing for the band as people will be seeking the expanded edition of the album just for this song.  "Better Or Worse", on the other hand, is a fairly forgettable ballad that has a real country feel to it.  The last two cuts are acoustic versions of songs already on the main disc and neither is an improvement.

The band also treated their fans to yet another acoustic version of a main disc song, with pre-orders being treated to an acoustic offering of "Lowlife", which I do not have.  It will be interesting to see if we have different songs on Best Buy, Wal-Mart, Shopko,  etc., versions of the album, or if iTunes or Amazon end up getting exclusive downloads to help feed sales.

Overall, this album feels like the little brother of Scars & Souvenirs, not likely to get the same amount of attention unless it is acting up and being naughty, which it does do on occasion.  However, the softer, more tender moments of previous albums come across rather flat this time around, at least for me.  Still, a very good, generally solid album that I think most fans will find many things to like on, and I think it will be on many people's summer playlist.

Rating:  Rock the standard version at 6.5, and CRANK the expanded version at 7.5...those extra good songs are worth the couple of extra bucks you will need to shell out.