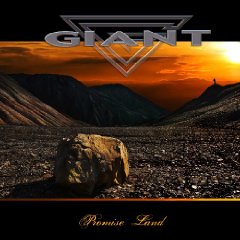 I have held off reviewing this disc because Giant is one of my favorite bands of all time and Last Of The Runaways is a Top 30 album for me, no question.  Huge vocals, excellent guitar work, both rhythm and lead, strong rhythm section, and fabulous songwriting are cornerstones of this incredible, yet mysteriously underappreciated melodic hard rock band.  If you picked up a Giant album in the past, you knew exactly what you were likely to get.

But things have changed....

For starters, lead vocalist/lead guitarist/main songwriter/founding member Dann Huff is gone.  That is an incredibly HUGE void from this band, as Dann was the heart and soul of Giant.  Also gone is keyboard player Alan Pasqua who, while often overlooked, was a big part of the Giant sound as well.  Recruited to attempt to fill the voids were new vocalist, Terry Brock, formerly of Strangeways and Seventh Key, and guitar player John Roth, formerly of Winger and also a member of Survivor vocalist Jimi Jamison's solo band.

Don't get me wrong, Brock is a very good, powerful vocalist, but his voice lacks the range and the emotion that Dann Huff brought to the group.  Likewise, Roth is a more than competent guitar player, but he sounds like he is trying to play Giant songs rather than actually being a member of Giant.  Again, it is not a lack of talent that is the problem...he just doesn't have the style or the sound that Huff has.  Just compare Roth's guitar playing and the two tracks that Dann actually performed on here, and it is obvious there is a difference.  That difference is a large part of the Giant sound.

Additionally, I think it is pretty obvious the difference in songwriting style.  Dann Huff did write five songs and co-wrote two more, which is roughly half the album.  Is it coincidence that even without reading the songwriting credits I found "Our Love", "Save Me", "Double Trouble", "Two Worlds" and "Promise Land" (all written by Huff) to be my favorite tracks?  I really don't think so...  If you close your eyes and listen to the ballad "Our Love" and imagine Dann's vocals on it, you can just hear how it would have fit with the rest of the band's back catalog.  Meanwhile, "Double Trouble" is a rocker that would have fit very well on the Time To Burn album, which is the hardest rocking disc of the Huff & Huff era.  After going back and looking at the writing credits, I was only off on one, as I truly thought that Dann's hand was in the writing on "Believer", but instead it was his guitar playing that was contributed here.  That leaves just five songs that Dann had nothing to do with (he also wrote "Through My Eyes" and "Plenty of Love").

So what about those five songs?  Are they Giant songs?  To my ears, they are Giant songs in name only.  "Complicated Man", while a nifty rocker, sounds like it is a Van Halen rip-off (can't miss the "Hot For Teacher" riff...).  "Prisoner Of Love" is another song that is not bad, but it might seem like you have heard this before.  I think that's because the chorus sounds like it is something the band Europe might have used at one time, and also because musically it is practically the same as Time To Burn's "Lay It On The Line", at least as far as the guitar goes.  So, I guess that technically does make it a Giant song, huh?  The best of the non-Dann songs is the big-time ballad "Dying To See You" which has a nice, bluesy guitar, some subtle keys in the background, and feels akin to a classic Journey song more than a Giant song, but it is good nonetheless.

So, what is the verdict on Giant with a different lead singer and different guitar player?  This is difficult.  If this had been recoreded under a completely different name, I would say that this is an above average hard rock album with powerful, if not unique, vocals, competent lead guitars, and solid rhythm playing with just the right amount of keys to keep the song textures melodic and interesting yet not overpowering enough to make the album start to drift off into AOR territory.  However, as a Giant album, it is lacking two things...Dann's voice and Dann's guitar...and those are two very GIANT things to be missing.

Rating:  Rock this at 5.5 knowing that if Dann Huff had been a full-blown participant it would have likely been 2 or 3 notches higher...


Back To Reviews Index
Posted by arttieTHE1manparty at 1:28 PM