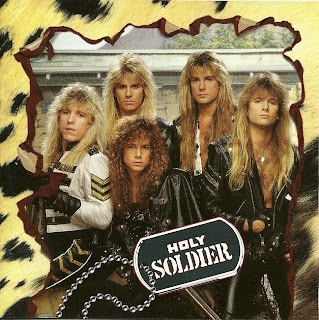 Whether you agree with the tag or not, Stryper is easily the most popular Christian hair metal band of all time.  There is no arguing that fact statistically.  That being said, I would argue that Holy Soldier was every bit as good, if not better, than Stryper musically, at least on this, their debut album, and on the follow-up.  If you have not heard either, get both...they are that good.

Holy Soldier was an immensely popular act on the Sunset Strip, frequently selling out venues and reportedly outdrawing many of their secular counterparts on a regular basis.  The combined excellent musicianship with strong songwriting, a very popular live show, and, let's face it, they had the look as well.  If any band on the Strip had a better combination, I am not sure who that band would be.  What Holy Soldier reportedly refused to do, however, was to sell out their Christian beliefs and to water down their message as was supposedly requested by some bigger labels.  I am not 100% sure if this is completely accurate, but it would seem to make sense as these guys signed to the Christian label Word instead of a big label like Epic or Atlantic or someone else.

Despite this being their first album, Holy Soldier is a very well-crafted, polished album, perhaps due in large part to the production of David Zaffiro, the lead guitar player for another popular Christian metal band, Bloodgood.  Don't let the "polished" adjective fool you into believing that this CD does not rock, because it does.  Album opener "Stranger" kicks in with a hard-rocking guitar and a thundering drum sound with Steven Patrick's excellent upper-range vocals soaring over the music.  "See No Evil" continues the rocking theme, this time on an anti-abortion song, before slowing things down with the album's first slower moment, the excellent "Pain Inside Of Me".  While these are just the first three tracks, it is instantly apparent that this is a band that has their sound down perfectly and is able to transition from big-time rocker to lighter-time ballad with minimal effort.  This continues as the album cranks the tempo right back up with "Cry Out For Love" and "Tear Down The Walls".

Perhaps my favorite tracks are both found on the second half of this disc.  "When The Reign Comes Down" is an excellent mid-tempo track talking about the return of Jesus to the earth, while "Through The Eyes of Innocence" is a ballad of top-notch quality that I think should have received a lot more airplay than it did.  "We Are Young, We Are Strong" is an excellent hard rocker to close out the album, as well.

From the time I bought this album when it was first released to this very day, I do not believe there is a better debut album in the Christian metal genre, and I have heard dozens and dozens of debuts over the years.  There is not a weak song on this album, in my opinion, and the professionalism in performance and recording is top notch with excellent packaging from Word Records who signed Holy Soldier as the first hard rock act in the label's history.

This album is difficult to find on the Word label without paying $20-25.  However, it has been reissued on the band's own Space Port Records and is not overly difficult to find at a much lower price.  There was also a single released (cassette-only, I believe) that can fetch pretty significant money on eBay and on-line record selling sites.

Rating:  Crank this underappreciated gem to 8.5!

Back To Reviews Index
Posted by arttieTHE1manparty at 9:14 PM