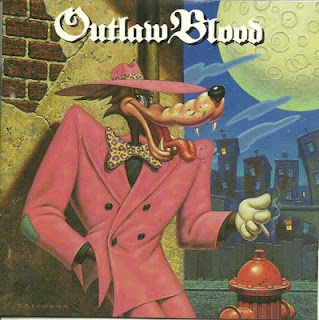 Outlaw Blood...major label band...big time producer (Jeff Paris)...video on MTV (for "Body & Soul")...  Ever hear of them?  No?  That's okay...very few have, which is a shame because this is a very good band that released just this one, underappreciated disc and then was swallowed up by the crater that the grunge meteor created when it hit the music scene.

Outlaw Blood plays a great brand of melodic hard rock that is infused with hints of southern rock and a touch of Memphis soul.  Sure, some of the lyrics are a bit juvenile at times and rather obvious in their intent (anyone who doesn't get the meaning behind "Tower Of Love" probably doesn't speak English as a first language...), but such were the times.  And, let's face it...there were not a ton of overly "deep thinkers" in the Hollywood scene in the 1980's and early 90's.  But don't let this deter you from checking into Outlaw Blood, as they truly are a very good band, sounding more musically related to bands like Tora Tora, Tangier, or Baton Rouge when they are in bluesy-shuffle mode than they ever sound like the majority of the Sunset Strip glamsters.

The music obviously mattered to these guys as the performances are top notch.  McCoy's vocals and Harschol's leads, in particular, stand out on this effort.  "Slave To Love", "Body & Soul", and the previously mentioned "Tower Of Love" are all top-shelf rockers, as is "Sink My Teeth".   "Last Act" is a great southern hard rock ballad complete with a slide guitar and a big power groove that I don't understand how MTV and radio overlooked.   The same could be said of "Every Day I Die", which is another great ballad that has more soul and feel to it than most of the lighter-in-the-air ballads that became radio staples for other bands.

The album has numerous gems scattered throughout, with "Hollywood Babylon" being a personal favorite.  This is a great song that alludes to the entrapments of the Sunset Strip scene at the time, and almost comes off as a warning to the youth who may be dreaming of making it big in Hollywood.  "She Sunset Stripped me, Her high heels kicked me, 'Baby you ain't going nowhere'" the song warns in an unusually honest song.  Additionally, "Fall Thru The Cracks" is a thumping bass line, a catchy chorus, and ripping solo all wrapped up in one mid-tempo rocker that gets stuck in my head whenever I hear it.

There are a couple of less-than-top-of-the-heap songs here, with "I'm In Shock" coming off as rather formulatic (that is a word, right?), and "Red, Hot, and Blue" sounds like a late addition to the album, not really fitting the same groove as the rest of the songs here.  Neither is terrible, but I also don't envision anyone listing either of these as their favorites on this otherwise very solid album.

Lead singer Marc McCoy became an ordained minister in the mid-90's and then died of cancer in 2000.  Rick Harchol also appears to have followed a similar path of faith, as he and McCoy collaborated on several Christian songs together in the mid-90's. (You can check out some of Rick's stuff here.) I don't know what happened with the rest of the band, but it would have been great if this band could have had the opportunity to enjoy some of the resurgent popularity that many bands of the 80's and 90's received, if that was something they would have been interested in.  As it stands, this self-titled disc is all that remains of an excellent band, and I highly recommend tracking it down.

Back To Reviews Index
Posted by arttieTHE1manparty at 12:19 PM