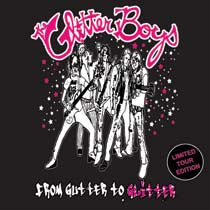 (c) 2010 Retrospect﻿
Johnny Sparkles--Lead Vocals
Jody Row--Drums
Chase "Babyface" West--Lead Guitars
William Dr. Haygood--Rythm Guitar
Jon Jon The Phenominon--Bass
First off, I SWEAR I didn't steal their album title for this blog!  Heck, I had never even heard of the Glitter Boys until I ran across this CD on eBay and thought I'd take a chance on it.
After doing some research, it seems this band from Mississippi got their record deal after they played Rocklahoma in 2009 and 2010 and got huge crowd responses.  They claim their influences are Skid Row, Motley Crue, Warrant, Jackyl, AC/DC, Twisted Sister, GnR...you know, the standard "we loved the 80's" list of influences.  You can hear bits of those influences, especially on songs like "Hold Me Tonight" which has a very definite old school Crue feel to the guitars, or on "Wasted Again" which goes so far as to steal AC/DC's "Oy, Oy, Oy!" chant...but their sound is a definite blend of the late 1970's and the most glam sounds of the Sunset Strip, such as early Poison.
There are no terrible songs on this disc, nor are there any real "must hears", but a few songs do stand out more than others.  "Bop, Bop Baby" is almost a Poison rip-off, but not of a specific song; the drums and guitars and delivery just reek of Bret, CC, and the boys.  "She's Red Hot" has a simplistic T. Rex/The Sweet sound to the music, but the vocals, especially the gang-shouted parts, are straight out of the 80's.  "Rock N Roll Time Machine" has a similar blending of styles, but leans more heavily towards the 80's musically and 70's lyrically.  Make sense?  Nah, probably not...better just buy the disc!  One thing of note is that Chase is a master shredder when he is allowed to fully cut loose.  The material I have read says that he is only 23 or 24 now, but he can definitely rip some leads and is worth listening to.
On the flip side, there are a couple of songs I could do without.  "Another Lonely Night" is the only ballad on the disc and would have really benefitted from a big power chord coming crashing in about halfway through, but the band maintains the song as an acoustic offering and it just doesn't do anything for me.  Since it's the last track, I just skip it.  "Take Me Out West" is just kind of there, not really doing anything but throwing in a couple of 80's glam cliches.
The band does have a sense of humor in their lyrics, which is appreciated, as I would think it is hard to play pure throwback music like this and take yourself too seriously.  How can you not chuckle...or maybe cringe...when you hear lyrics like "hold me tight while we do it tonight"?  Yet this is really as raunchy as these guys get, not fully crossing the line into audio porn like a band such as Steel Panther, which is appreciated.
One of my main complaints would be that the drums sound programmed at times, especially the snare.  I am not sure if a drum machine was used and Jody Row came on board after the fact, or if the mix is just THAT bad at times.  It's not bad to the point of making me want to turn the disc off, but it is a distraction at times.  Similarly, Sparkle's voice sounds a bit flat at times, and I do not mean in a musical sense.  Sometimes it sounds like his vocals were recorded in analog and the rest was recorded in stereo.  It's kind of hard to explain, and maybe this was done on purpose to give even more of a throw back feel to the vocals.  I did read on the Retrospect Records page that this "Tour Edition" is not the final version of the album and was put together quickly to give the band some product to sell on tour, so perhaps these minor issues will be corrected on later versions of the record.
With a name like Glitter Boys, how could the band play anything but late 1970's/early 1980's glam?  That is exactly what I thought when I snagged the disc, and it is exactly what I got when I popped it in the CD player.  Is it something that is going to blow you away when you hear it?  No, not likely, but it is a good time, even if it is a bit dated sounding and not overly well produced at times.  If you can find this CD at a reasonable price, I would go ahead and pick it up.  I highly doubt you will be disappointed and will likely have a pretty good time listening to these songs.
Rating:  Rock this at 6.5...hang up some Farrah posters, tease the hair up big, and maybe throw in a few episodes of That 70's Show and have a theme party!