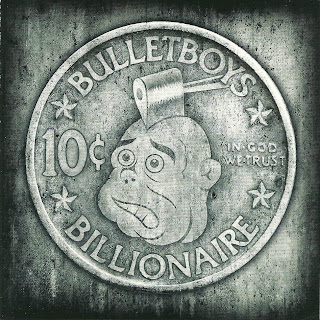 Let me start off with the positive, because I absolutely LOVE the Bulletboys first three discs (Bulletboys, Freakshow, and Za-Za).  Marq Torien has always had a very unique voice with a lot of power and, quite frankly, a lot more soul to it than the vast majority of singers in the hair genre, especially on the sleazier side of things.  So, I am happy to report that on 10¢ Billionaire, Torien still has his pipes, which is not something that can be said about a lot of the 80's har bands who have made comebacks in recent years.  I have no doubt that Torien could still rip through "Smooth Up In Ya", "Hang On St. Christopher", or "Kissin' Kitty" with no problems.  Secondly, Torien and Stoffregen are a very solid guitar tandem on a couple of these songs, with some excellent work on several songs, with some good solo work on "Asteroid", "Born To Breed", and "Witness" for example.   And, finally, there are a couple of moments when you get the feeling that this disc could provide a return for this once great sleaze band, with songs like "Blessed By Your Touch" and "Wasted" being pretty strong tracks that mix the old Bulletboys sound with a definite modern vibe and production that works fairly well.  "Bringing Home The Gun" is another really solid track that mixes the old with the new, and "Jenna Star" has an interesting retro-vibe to it.

So, let's see....that's three positive things I can say about this album.  Good vocals, pretty good guitar work in several spots, and a handful of solid songs.  I'm glad that I came up with that list, because I really only have one bad thing to say about the rest of the album...IT'S NOT BULLETBOYS!

Man, I had some high hopes after hearing the first two songs, "Asteroid" and "Blessed By Your Touch" back-to-back.  Sure, the sound is a bit more modern than I would have liked coming from this band, but hey, it was still Torien's voice, the songs rocked, and I won't begrudge a band for trying to expand their sound and stay relevant while not completely casting off their old style and sound.  But the more I listened the more I discovered a band who had no interest in their past and wanted to be something modern.  Its when a band completely shuns their old style, such as on  "Born To Breed" and "Save The World", which both sound like Bulletboys trying to channel Stone Temple Pilots, that I lose interest quickly.  "Girls Kissin' Girls" is just ridiculous, with the band trying to show they are still "sleazy" on this borderline modern punk tune, when what they are is pathetic sounding.  And why, oh why, did the band choose to release "Road To Nowhere" as a single and then "treat" us (insert sarcasm) to TWO versions of this blatant stab at modern rock radio which is also a blatantly average, uninsteresting song?  "Witness" is just about as bad, although at least on this song Bulletboys throw out any pretenses of being their old selves and simply go for a full-on modern sound reminiscent of Cavo, Saving Abel, Three Days Grace, etc, and slap a nice solo in the mix.  I would be curious to see how this grab for modern radio acceptance sold because I would almost bet that the band would have sold more records had they gone for the revitalized 80's hair band niche market rather than trying to convince a bunch of teens-to-early 30-somethings that they are some hot new band.

In all fairness, if I had been handed this CD and told, "Hey, check this new band out", and I had NO CLUE it was Bulletboys, I probably would have liked about half, maybe 2/3 of it.  I'm not going to lie and say I don't appreciate a good chunk of the modern hard rock scene, because I do.  But Torien would have done himself a favor to come up with a new band name to go along with this modern sound than to try to get Bulletboys fans to buy it or to try to convince the kids that the Bulletboys from their parents' CD rack is now relevant to the modern scene.  So, to be 100% fair, maybe I shouldn't say this album is terrible (for what it is) as much as I should say it is terrible if you wanted a Bulletboys disc.  How's that for democratic?

Rating:  If you want modern hard rock, rock this at 5...if you want old-school Bulletboys, turn this WAY DOWN to a 2...maybe a 3...because this ain't it!

Back To Reviews Index
Posted by arttieTHE1manparty at 3:20 PM