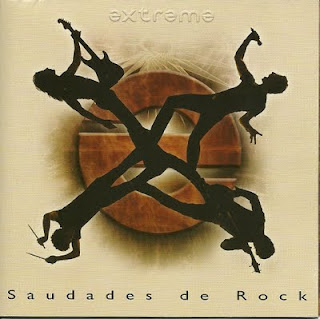 Extreme was one of the earlier bands to jump on the "80's Comeback Train", releasing Saudades de Rock in 2008, a couple of years ahead of many of their comrades.  As such, I am not sure if they missed out on the chance for a big label deal or if they chose to go with Open E Records despite other options.  Regardless, small label aside, this is a big Extreme record, chock full of their trademark harmonies, funk-infused hard rock, and Mr. Bettencourt's incredible guitar playing.

On this, their first record in nearly a decade, and one which comes almost 20 years after their debut effort, Extreme is found doing exactly what Extreme has always done.  These Boston-based rockers know what their fans like and what they expect, and the band delivers.  From the moment Cherone kicks off "Star" with some nicely layered vocals to the last notes of the closing ballad "Peace (Saudades)", there is no doubt that this is Extreme.  The band did not set out to reinvent themselves or to appeal to the modern rock masses.

For me, Extreme was one of those bands that was always on the fringe of my tastes.  I like what they do, I really enjoy their sound, and they were fun to watch the one time I saw them live, but they kind of lost me with III Sides.  The music was still good, but they seemed too commercial by this point, appearing to intentionally reach for radio airplay and losing some of their humor and fun.  Waiting For The Punchline, in return, was a much darker record than anything Extreme had released before and record sales reportedly went down the drain, although I personally liked several tracks from that disc.  Saudades de Rock, while stylistically in the same vein as III Sides draws my attention a bit more, garnering more listens in a comparatively short period of time than III Sides has ever received from me.  Likewise, the band has also loosened up a bit on the seriousness of Punchline, especially on the single and video release for "King Of The Ladies", which is what I want to hear from Extreme.  A great chorus and a somewhat hip-hop vibe make this a really fun listen, especially when Nuno lays down the gritty-yet-laid-back, 70's inspired solo.

Other stand-out cuts on this disc would have to be the rockers "Star", "Slide", and "Learn To Love", all of which sound like they could have come from Pornograffitti with their funk-rock style, Cherone's strong vocal performances and Nuno's...well...being Nuno.  "Comfortably Dumb" is an excellent mid-tempo number full of layered harmony vocals that, for me, competes with "King Of The Ladies" and "Slide" for best song on the album.  There are no "More Than Words" or "Hole-Hearted" styled ballads here, but the piano-driven "Ghost" is likely to appeal to those seeking the sentimental side of Extreme, as is the acoustic "Interface", which showcases a particularly strong performance from Cherone who has fully returned from the abysmal Van Halen III outing on this record.  Previously mentioned album closer "Peace (Saudades)" is another ballad fans of the softer side of the band will likely fall in love with.

There are a couple of throw-aways here, particularly with  the goofy "Take Us Alive" which sounds exactly like what you would expect if Extreme announced they had become a bluegrass band (not kidding).  It is performed well, don't get me wrong, and it isn't a terrible song, but it really has no business here and sticks out terribly, especially when it is thrown in the middle of the album like this.  "Last Hour" has a plodding, bluesy, almost bump-and-grind rhythm to half of it, while being an acoustic number for the other half, and it comes off as kind of a mess, in my opinion.  "Flower Man", on the other hand, comes off as a punk-styled track that really doesn't fit Cherone's vocal style.  While I applaud the effort to expand their sound a bit, I think songs such as these would have been better on another Extreme album and not on their "comeback/reunion" disc.  Just my opinion, but if these three tracks were removed this would be a nearly flawless Extreme album.

Three-fourths of the original band are here, with only Figueiredo on drums being the newbie here.  He is more than competent, however, and locks right in with Badger's style and sound to provide a solid base upon which Nuno and Cherone can usually build the trademark Extreme sound.  Overall, this is an excellent return to form for one of the more original sounding bands of the 80's hair genre that Extreme was always lumped in with.

Rating:  Even with the couple of minor misses, I would crank this to 7.

Return To Reviews Index
Posted by arttieTHE1manparty at 1:33 PM