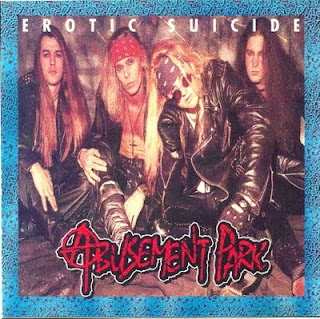 There is, literally, nothing to dislike about this album.  Every track here is above average to excellent, there is only one ballad to slow things down (and they even put it last on the record!), the production is excellent (especially considering the lack of a proper label to produce it), and the performances are hungry, gritty, sleazy, and far superior to what was left of the Hollywood scene.  To describe the sound, imagine Faster Pussycat (vocally) and Tuff's What Comes Around Goes Around album with just a touch more attitude to the music.  Aside from the ballad, this band has no illusions about gaining airplay with this record, as everything here is too aggressive, too loud, and too sleazy to ever play alongside the Nirvana's or Pearl Jam's or Smashing Pumpkins of the day.  This band was about playing the music they loved, playing it loudly, and likely scaring the snot out of fathers who were afraid their daughters would run off and become groupies!

Favorite tracks for me are "Can't Remember" (check out the video below), a funny song about picking up chicks, "Goin' Down", the band's ode to hookers, "Comes Around Goes Around", and "Ties Me Up".  "Babylon" and "Mean Sex Machine" are also top-notch sleazers, with everyone of these songs coming in full-speed ahead.  In fact, the only complaint I have ever heard from someone who has actually heard this record is that they "kind of" wish there was a break in the middle to keep the songs from all running into one another.  I can understand where those folks are coming from, to a degree, but I will take great rocker after great rocker if it means no ultra-sappy, hyper-sugary ballads in the mix.

Speaking of ballads, yes, I did mention that there is one on this album...and I also mentioned it is the last cut.  "Sweet Summer Nights" is a pure glam power ballad, again sounding very much like Tuff's "Kissing You Goodbye" but with Taime Down on vocals.  Had it been 1990 and not 1993, I think this song would have been all over Top 40 radio and on MTV.  As it is, it's a solid effort that just came too late to be of any use.

Abusement Park is top-notch sleaze for fans of the genre and well worth tracking down.  Koch International out of Germany did eventually pick this up for distribution, but even with that assistance, this CD is dang near impossible to find for under about $50...and some of those are bootlegs, so buyer beware!

Rating:  Crank this unheralded gem to 8.5!


Back To Reviews Index
Posted by arttieTHE1manparty at 10:19 AM