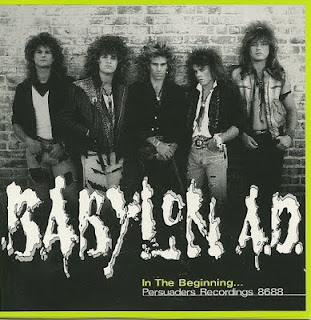 Every band has a beginning, but sometimes that beginning really isn't worth hearing.  I mean, not every demo or self-financed recording is necessarily worthy of being given a shot by the general public, and most bands realize that.  Afterall, so many bands, especially in the 1980's just wanted a chance to have something to prove they were in a band and to maybe hand out to friends.  If it was an unusually good recording, it might get sold at local shows, but quite often there was a reason the album wasn't picked up by a label.

Back in the mid 1980's a band of unknowns calling themselves the Persuaders was much like any other band that I described above, with one exception.  Their music WAS good and definitely should have been given a chance to see the light of day.  However, it would take a couple of years and a name change before the band would be given a chance to shine.

I am not certain if these are the very first songs this version of the band ever recorded, but they are definitely some very good songs, performed with a polish brand new bands rarely possess.  Tracks such as the rocking "I'm No Good For You", "She Likes To Give It" and "Last Time For Love" had immediate airplay written all over them if only they would have had that big production sound that was so popular in the 1980's.  "Tears" and "Too Much Too Young" are also stand out cuts that really show the promise that would come to light on the Babylon A.D. recording just three or four years down the road.

One thing that is noticable between these Persuaders recordings and the sound that Babylon A.D. would later put onto tape, vinyl, and CD, is these early recordings are a little more sparsely recorded, not having quite as full or dense of a sound.  Some of that is due to the raw production and the mix, but some of it, I think, is the band simply needing a bit more time to mature as song writers.  "When I'm Gone" tries too hard to be a big bust-out-the-lighter power ballad and comes across as rather thin sounding, and "Bad Mistake" is just too generic sounding, lacking a big hook or any real power to the sound.  Again, these are first efforts from the band, and that should be taken into consideration when giving these tracks a listen.

Perris Records and Apocalypse Records have cleaned up these recordings but left them in their same basic state so that the listener gets the chance to hear Babylon A.D. in its first, rawest incarnation.  The packaging is a really nice bonus, in my opinion, as lead vocalist Derek gives a pretty informative, multi-page rundown on the history of the band prior to their major label release with Arista Records.

A lot of these "before they were famous" releases fall flat on their faces, leaving the listener to ask how they ever made it big.  This is not one of those releases.  It does not hold up to that awesome debut, or even the follow-up Nothing Sacred, but it is a great indicator of what was in store for these five up-and-coming rockers.

Return To Reviews Index
Posted by arttieTHE1manparty at 5:42 PM