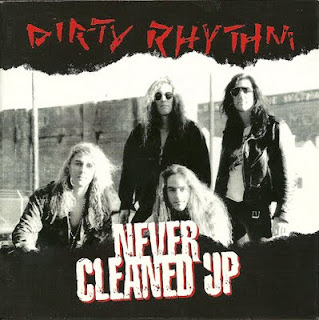 Dirty Rhythm is one of those fringe bands from the hair metal scene that should have been much bigger.  They had the look and sound that MTV and rock radio were looking for in the late 1980's and early 1990's, and they had an appreciable fanbase at one time.  Their music is hook-laden with a sometimes funky style that kept them fresh sounding, yet they also reeked of the same attitude that pushed bands like Skid Row over the top into the big time.  In fact, if you close your eyes and just listen, you can hear Skid Row bleeding through the music of Dirty Rhythm, and the latter is frequently compared to the former when looking for a musical equivalent.  Sweet FA is another band that Dirty Rhythm is sometimes compared to, but, of course, a lot of people don't know who that quickly forgotten band was either, so you see the problem in describing Dirty Rhythm.

Never Cleaned Up is essentially the left-overs of a career that never went anywhere.  The band had released one full-blown album in 1991, the critically well-received but airplay and sales neglected Hard As A Rock.  Of course, the fact that the band never had a major label to support them didn't help, and the band recorded these 7 tracks (6 songs and a video) for what was reportedly going to be the follow-up album that would be shopped to some of the bigger labels.  Of course grunge took off at about the same time and the hair metal era was dead, so Dirty Rhythm was dead on arrival as well.

The honest truth is that I actually prefer four or five of these songs to anything on that debut, and I think this could have been a killer album had the scene not just totally evaporated.  "Funky Little Sister" has tons of swagger and attitude about it and just oozes out of your speakers with a sensual groove that has you hooked from the outset.  Album closer, "Wild Child" is an equally catchy, albeit more straight-ahead and aggressive, rocker with a solid hook and chorus.  "Bad Blood" is another interesting track.  With a title like that, you would think this was a balls-out rocker, but actually it is more of a mid-tempo romp featuring shouted gang vocals,  a catchy rhythm, and a very nice lead solo that inexplicably slips in and out of power ballad chorus territory, only to jump back out and pick up the pace once again.  I'm not really sure what the band was trying to do here, but it is definitely a unique track that is neither excellent or terrible...it's just kind of there.

The inclusion of the video is a cool little touch.  "Feel The Fire" is easily one of the top two or three songs this band ever recorded and the video intermixes "live" band performances with a leggy model-type (although she is, *GASP* a brunette and not a blonde!!!) strutting her way off a train to a Dirty Rhythm show while teasing as many guys as possible.  Okay, it's not high drama, but what video really is?  However, judging by the performance and style of the band in this video, I can tell you that Dirty Rhythm is one of the unknowns that I wish I had gotten a chance to see back in the day.  Really good song here...I just wish it was a little easier to access on this disc, and I wish the song had been included as an audio-only track as well.

The packaging is absolutely top-notch, as most Suncity Records releases are.  Full lyrics are included and the back story of who and what Dirty Rhythm was and where they are now.  It is a bit short, but I think this disc is well worth the few bucks you will have to shell out.  In fact, if you had to choose between this collection and the band's debut, I would take this one every time.

Look, the earth isn't going to shatter when you pop this in your CD player or your computer, but you are going to get six (or seven) really solid tracks from a band that was just unlucky enough to arrive on the scene as the hair metal bus was leaving the station.  Track it down and give it a chance.

Back To Reviews Index
Posted by arttieTHE1manparty at 5:29 PM