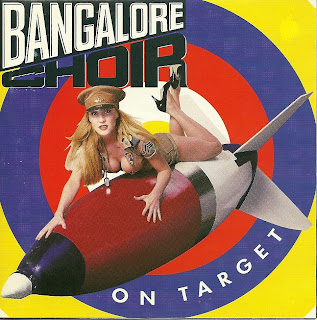 Several years before anyone would accuse him of almost single-handedly destroying the band Accept, David Reece fronted this solid, yet unhearalded band.  Firmly entrenched in the hair metal genre during the birth of the grunge explosion, Bangalore Choir stood virtually no chance of surviving the Seattle onslaught that was soon going to wipe out all of the Sunset Strip bands and those of a similar ilk.  That is unfortunate, because this album features a few really good songs, above average musicianship, and one of the better lower-range vocalists of the genre.

"Angel In Black" was the lead single from this album and is a good indicator of what Bangalore Choir brought to the table when they were clicking on all cylinders.  A wailing guitar intro over heavy, out-front drums, and Reece's powerful vocals greet the listener in fine melodic-yet-hairy form, albeit in a bit of a cliched manner with a chorus of "Angel, angel in black, she took me down to hell and back...".  Musically, this is one of the heaviest tracks on the album and is a great example of what this band had to offer.  Follow up track "Loaded Gun" is the kind of mid-tempo rocker that MTV had a love affair with in the late 80's but quickly turned its back on by about 1991.   "If The Good Die Young" is your typical "we're so bad hell don't want us and Heaven can't contain us" type of rebellion anthem that was typical of a lot of bands of the time, but this one is done in ballad fashion, which made it a bit unique.

One thing that likely hurt this band was the absence of a true lighter-in-the-air power ballad.  "Hold On To You" was a decent, if somewhat plodding ballad that could have benefitted from a beefed up guitar solo a the removal of  the ridiculous keyboard-mimicking-a-triangle sound effects that are scattered throughout.  Other than that, the previously mentioned "If The Good Die Young" is the only real attempt to slow things down, which is fine by me, but not a good way to get the attention of radio and MTV at the time, especially with hair metal quickly being smothered and strangled of its last gasps of airplay.

Stand out tracks would include "She Can't Stop", which is something of an indicator of the sound that Reece would bring to Accept on the Eat The Heat album.  "Freight Train Rollin'" is a solid effort but doesn't pack the energy that the title might seem to imply.  Album closer, "Just One Night" is one of my favorite tracks and showcased the guitar chops of Mitchell and Kirk as well as anything else on this album, and "All Or Nothin'" is another high-energy rocker with some great rhythm guitar and a catchy hook and solo.  "Doin' The Dance" is a funky little number that has a fat bottom line to it and a quirky groove that gives Reece a chance to alter his typical straight-forward power delivery to great effect.  This song, co-written by Jon Bon Jovi and Aldo Nova would have been a great MTV video had it come out about 3 or 4 years earlier, but by 1992 it was just another good song on a soon-forgotten release.

Bangalore Choir was a band that had everything going for it except the decade.  They had the formula down:  blonde lead singer with a brunette band all dressed in black leather, a hot, scantily clad chick on the cover, a band photo in front of a vintage World War II bomber, a couple of catchy tracks, and big-time co-writing contributions.  What they lacked was that one killer ballad that record executives thought could save the hair metal world from implosion, and of course the ability to go back in time to 1988.  Despite this, the rockers are really good, and this is definitely one of the last really good hair metal albums to manage to slip out from under the grungy shadow that was creeping across the musical landscape.  Snag it if you find it...

All Or Nothing (Firefest Live) 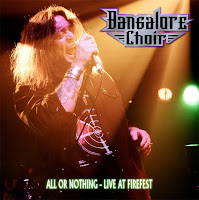 Posted by arttieTHE1manparty at 11:41 AM