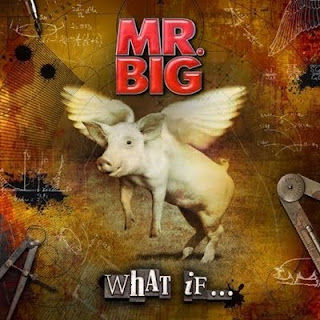 This has to be one of the more unlikely full reunions of bands from the 1980's and 1990's.  First Paul Gilbert left so he could do some solo work, and Ritchie Kotzen replaced him in the band.  Reportedly, this did not sit well with Sheehan and, depending upon who you ask or what you read, there was said to be a LARGE amount of bad blood between Sheehan and the rest of the group by the time the band shut things down in 2002.  The band denies this, however, and they insisted the break-up was a friendly one with the members simply deciding to call it a day.  Regardless, Mr. Big, who never received the respect they were due in America, appeared to be a dead issue for all involved, not matter who you ask.

Apparently all they needed was a seven year break to recharge, because with their brand new album, What If..., Mr. Big comes back with a vengeance, releasing what is arguably their hardest hitting album ever.  From the very first note of "Undertow" to the very last resonation on "Kill Me With A Kiss", this is a band that shows that not only are they still at the top of their game as a band, the individual players are still at the top of the heap in their respective instrumental fields.  This is, quite simply put, a masterful release from what has long been regarded by may as one of the most talented bands of their era, regardless of genre.

I have read some reviews that state that Eric Martin has lost some of his range, but I honestly don't hear it; Martin's pipes are strong and distinct, with no obvious signs of wear and tear that I can detect.  He sticks mostly to his lower register here, but I think that is as much a product of the songs as anything.  Martin's bandmates are equally adept on the microphone when they get together to harmonize as Mr. Big has always been excellent at doing.  Gilbert and Sheehan each disply the type of prowess on their individual instruments that has been each man's trademark for many years, with Gilbert ripping off solo after solo in these songs, and Sheehan seemingly wishing he had a regular six-string rather than his bass, as he plays the snot out of the thing in a way very few of his peers can.  Even Torpey, who is often overlooked for his skill behind the kit, comes off as sharp, yet polished, lending a solid backbone to each of these tracks.  To my ears, What If... is the most complete Mr. Big album ever, at least from a musical standpoint.  But how about the songs themselves?

Not an issue at all.  This collection of songs finds the band treading very comfortable water, although as I previously mentioned, I think they come across as harder and more aggressive than ever.  "Undertow" is a scorching rocker that sets the tone for the rest of the disc, and is followed up in fine fashion another finger-blistering effort on "American Beauty".  There are only two ballads on the disc, and neither one slows things down to the level of "To Be With You", "Wild World", or "Just Take My Heart" from past releases.  In fact, "Stranger In My Life" is much more in line with a true "power ballad" than anything I can remember Mr. Big doing in the past, and "All The Way Up" is more mid-tempo than pure ballad and has quite a bit more oomph to it than the stripped down "To Be With You".  Outside of these two songs, however, it is pretty much full speed ahead for the guys, and they close things out as powerfully as they opened up, as "I Get The Feeling" and "Kill Me With A Kiss" both feature some tasty soloing from Gilbert and powerful bottom lines laid down by Sheehan and Torpey.  Nothing on What If... falls into that dreaded filler category in my opinion, and the flow of the album is smooth from one track to the next.

There is pretty much nothing to dislike about this return from Mr. Big, in my opinion.  The band sounds like they are having fun with each other and the performances are top-notch.  My guess is that those who have ripped on this album were never really fans of this uber-talented band to begin with.  There is no doubt that this is Mr. Big when you hear them and I predict that this album will do exceptionally well in Japan, where the band has always had a massive following, and will go largely ignored in the United States, which is truly a pity.  Make the effort to track this album down, folks, if you have ever been a fan of the band, because this is one reunion album that picks up where the band left off and actually improves upon past strengths.