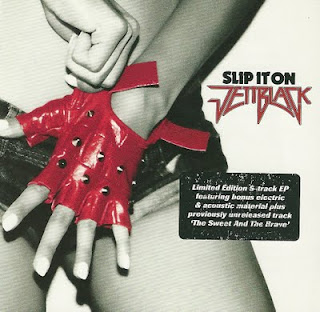 JETTBLACK is a British band that has jumped feet first into the middle of the European sleaze revival.  They distinguish themselves from several other bands, however, with the relatively unique arrangement of having two lead vocalists who also handle all of the guitars.  What makes it even more unique, at least to me, is you can just barely distinguish the singers they sound so much alike.  It creates some really good harmonizing, but I guess I'm not sure why they don't designate just one guy as the front man.  Oh well, it's not like it really matters anyway, because these guys are good enough to get away with the little quirks here and there.

This 5-song EP is a nice little treat coming on the heels of their debut full-length release Get Your Hands Dirty.  In fact, this EP contains two tracks from that album, the hard-rocking title track and "Motherfu**er", although the latter is given the acoustic treatment here which really puts a spin on this otherwise nasty track.

The rest of this album is comprised of new or unreleased material.   "Chasing Love" is a nice little uptempo track which has a definite throwback-to-the-80's feel to it, but it is nothing overly special.  "The Sweet And The Brave" is a second acoustic track that is exclusive to this EP, and contains a semi-cowboy feel to it...if those cowboys were playing downtuned acoustic guitars.  It's kind of hard to describe, but it really works well and is a nice addition to this collection.

What really grabs the listener's attention, especially if they are FROM the 80's and not just fans of the 80's, is JETTBLACK's spin on the Kenny Loggins classic "Dangerzone".  Yep, THAT "Dangerzone", as in Maverick, Goose, Iceman, and the rest of the Top Gun movie crew.  I have to admit, at first listen, I wasn't overly liking what I heard.  I'm not going to lie...I really like Loggins' version of the song.  After a few more listens, however, I found myself really enjoying the harder edge that the boys put to this song, including the nice little solo in the middle.  They don't do anything to try to hide what the song is, but they put enough of their own sound and a bit of a modern update to the song to call it their own.  Will it top that classic guilty pleasure?  Nope, but with the glut of cover albums lately, there is nothing wrong with a band doing a SINGLE cover on an album and doing it well.

All in all, could you live without this EP?  Sure.  It doesn't reinvent the genre or do anything to make the listener say, "Wow!  Never heard that before!"  At the same time, if you are looking for a quick introduction to the band without having to pay full import prices for their full length release, this is a nice place to start.

Back To Reviews Index
Posted by arttieTHE1manparty at 10:03 PM